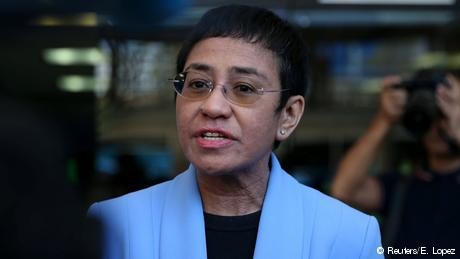 Maria Ressa, a regular critic of Philippine President Rodrigo Duterte's brutal war on drugs, was arrested on Wednesday and charged with libel against a businessman. Her arrest drew strong condemnation from both within the Philippines and abroad. Ressa, who is now free on bail, and her organization Rappler have repeatedly locked horns with Duterte and his administration.

Rappler's reporters are known for scrutinizing his policies and appointments and for questioning the accuracy of his sweeping, often bellicose statements.

The president has made no secret of his dislike of Rappler's reporting. He once told reporters in Manila that the news site had been "throwing trash and s**** all along," and that its stories were full of innuendo and "pregnant with falsity."

Still, Duterte's government said Ressa's recent detention was "merely part of any criminal procedure" and that it has "nothing to do" with press freedom.

In a DW interview, Maria Ressa said the case of cyber libel against her is a travesty of justice and that the Duterte administration is weaponizing information and manipulating the rule of law.

DW: You are now facing a string of charges that run from tax evasion to cyber libel. How did it come to this?

Maria Ressa: This particular case of cyber libel is a travesty of justice. It is about a story that Rappler published seven years ago, months before the law we allegedly violated — the Cybercrime Prevention Act — was enacted. The government can't impose a law and its penalties retroactively. But that's what they're trying to do. The lawyers of the National Bureau of Investigation (NBI) already threw this case out but it was magically resurrected by the Department of Justice (DOJ) later.

Can you explain how charging you with violation of the cybercrime law has ramifications for not just you and the Philippine media but for all Filipinos in general?

The period of prescription was on something else and is connected to the period for how long you can file a libel case. Under the Philippine law, it is one year. The DOJ now has this creative interpretation saying that it is much longer than that and they are using it here.

It means that anyone in the Philippines who posts on Facebook can now be charged with cyber libel, which carries a bigger penalty than ordinary libel. They can also be charged for a much longer period than allowed under the libel law.

When you were interviewed immediately after you were released, at some point, you sounded emotional. How are you holding up now?

I'm good! I was cracking because I was so sad. I've been here since way before this government came into office and I will be here after as well. But I am extremely sad to see how the law is being manipulated.

Without the rule of law, you have nothing in a democracy and you end up just as a mob. We have always known that our institutions are weak and we are a patronage-driven system. But when people who wield power institutionalize patronage instead of the rule of law, then we have just taken a step back into the dark ages.

I'm shocked at the levels of unprofessional behavior. Abuse of power becomes clear when actions that are taken reflect that. The reaction my arrest triggered, not just in the Philippines but across the world, was because this is a travesty of justice.

What needs to be done to protect media as the fourth pillar of democracy?

I think it's very easy in the Philippines. We need to clear the toxic sludge on Facebook and Facebook is starting to take those actions.

The reality is that every Filipino needs to admit that they are being manipulated and the government is using a scorched earth policy for power by manipulating facts and truth, for lying like it is true. These things dumb down both our discourse and the public.

When you weaponize information the way this government and its supporters have done and you let lies masquerade as facts, even the government gets confused about what is real and what isn't.

The key thing here is not to be afraid. My arrest is meant to create a chilling effect. For journalists, the subliminal message is that if it can happen to Maria Ressa, it can happen to them as well.

Maria Ressa is a Filipino journalist. She is the chief executive officer of the Rappler online news website. She previously worked as an investigative reporter for CNN.

This interview was conducted by Ana P. Santos.

Editor's note: Ana P. Santos is a regular contributor to Rappler and has a bimonthly column.