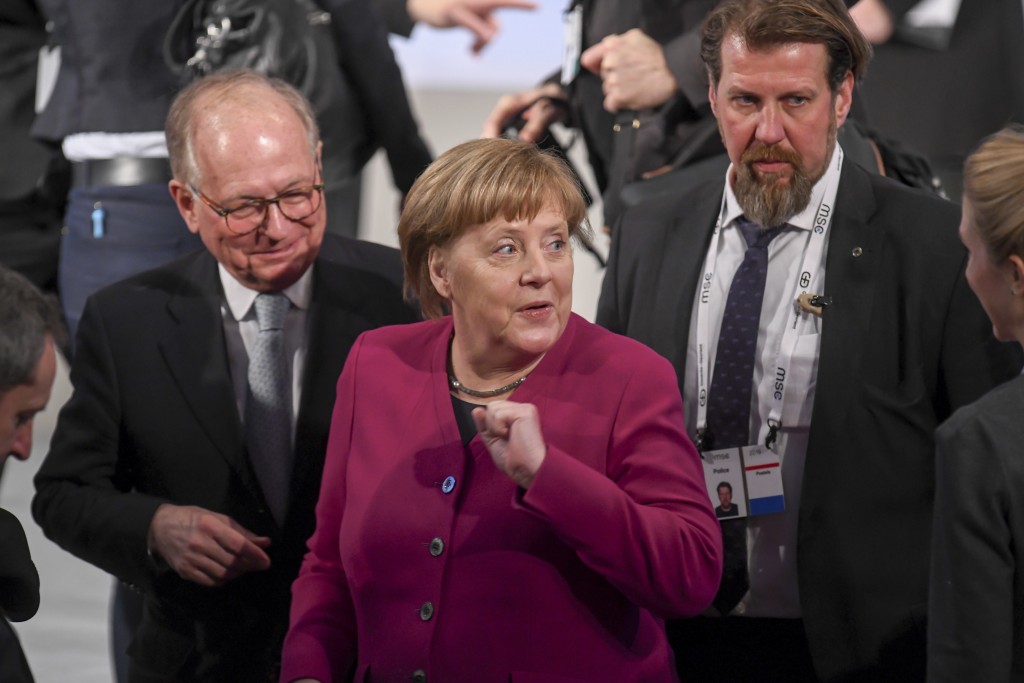 MUNICH (AP) — The Latest on the international security conference taking place in Munich (all times local):

German Chancellor Angela Merkel is defending European powers' decision to stand by the Iran nuclear deal, describing it as an "anchor" allowing the West to exert pressure.

U.S. Vice President Mike Pence accused Germany, France and Britain of trying to "break" American sanctions on Iran and called on them to follow Washington in pulling out of the nuclear deal.

Merkel told the Munich Security Conference Saturday the split over Iran "depresses me very much," but downplayed the substance of the differences.

But "the only question that stands between us on this issue is, do we help our common cause, our common aim of containing the damaging or difficult development of Iran, by withdrawing from the one remaining agreement? Or do we help it more by keeping the small anchor we have in order maybe to exert pressure in other areas?"

Egypt's president has called on Western countries to boost efforts at tackling extremist ideology in online media and mosques.

Speaking at the Munich Security Conference Saturday, Abdel-Fattah el-Sissi says countries must "tackle websites that are inciting hatred and spreading extremist and terrorist narratives among communities in the Islamic world and in the West."

He also said authorities should "be very mindful of what is being promoted at houses of worship," adding that extremists should not be allowed to preach. He underlined his efforts in Egypt to control the sermons in mosques.

El-Sissi also mentioned that in the terrorism context, the failure to reach a fair and final settlement in the Israeli-Palestinian conflict represents the main source of instability in the Middle East.

German Chancellor Angela Merkel is calling on China to join international disarmament negotiations after the collapse of a Cold War-era treaty on nuclear weapons in Europe.

The U.S. earlier this month announced that it was pulling out of the 1987 Intermediate-Range Nuclear Forces treaty, accusing Russia of violating it. Moscow followed suit, strongly denying any breaches. The U.S. administration also worried that the pact was an obstacle to efforts to counter intermediate-range missiles deployed by China.

Merkel told the Munich Security Conference Saturday that the U.S. withdrawal was "inevitable" because of Russian violations. But she noted the end of a treaty conceived "essentially for Europe" leaves Europe trying to secure future disarmament to protect its own interests.