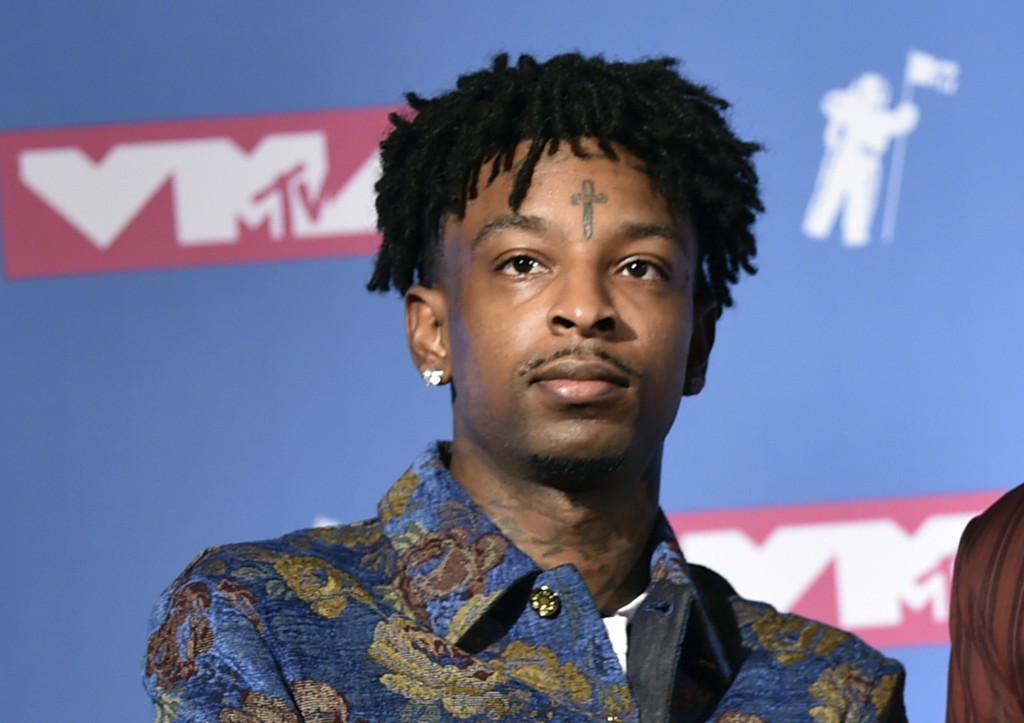 Atlanta-based rapper 21 Savage has surrendered to Georgia authorities on an outstanding warrant and been released on his own recognizance.

Attorney Abbi Taylor says the Grammy-nominated artist, whose given name is She'yaa Bin Abraham-Joseph, turned himself in Friday morning on a warrant in Liberty County, along Georgia's coast.

Taylor says they learned of the warrant while his client was in immigration custody and made arrangements for him to surrender.

The theft by deception warrant stems from what Taylor said was essentially a civil dispute. She says Abraham-Joseph performed a concert in Liberty County several years ago and the person who had booked the concert didn't feel he had done enough and sought a warrant rather than suing him.

The Atlanta-based rapper 21 Savage says he didn't talk about his British citizenship before because he didn't want to get deported.

The Grammy-nominated artist, whose given name is She'yaa Bin Abraham-Joseph, was interviewed by ABC's "Good Morning America" for a Friday broadcast.

He was arrested Feb. 3 in what U.S. Immigration and Customs Enforcement has said was a targeted operation. He was released from immigration custody Wednesday on a $100,000 bond.

The Atlanta-based rapper 21 Savage said in an interview aired Friday that he didn't talk about his British citizenship before because he didn't want to get deported.

The Grammy-nominated artist, whose given name is She'yaa Bin Abraham-Joseph, was arrested Feb. 3. U.S. Immigration and Customs Enforcement called it a targeted operation. He was released from immigration custody Wednesday on a $100,000 bond.

Abraham-Joseph, now 26, told ABC's "Good Morning America" he had no idea what a visa was when his mother brought him to the U.S. at 7 years old. His visa expired in 2006.

"I knew I wasn't born here," he said. "But I didn't know like, what that meant as far as when I transitioned into an adult, how it was going to affect my life."

The rapper said he wasn't hiding the fact that he isn't a U.S. citizen, but "I didn't want to get deported so I'm not going to just come out and say, 'Hey by the way, I wasn't born here.'"

His lawyers have said he applied for a new visa in 2017, and his case remains pending. One of his lawyers, Charles Kuck, said earlier this week that if the case follows the normal trajectory, it could take two to three years.

Abraham-Joseph said he believes the way immigration policy is enforced is broken, that he doesn't think people "should be arrested and put in a place where a murderer would be for just being in the country for too long."

Attorney Alex Spiro said on "Good Morning America" that he believes Abraham-Joseph was targeted "because he's both a celebrity and they can use this as a way to send a message and also, perhaps, because of his music."

He said he hopes the attention can help others held in immigration detention.

"There's people that are just totally forgotten that exist in these detention centers," Spiro said, later adding, "I'm hoping people like 21 Savage will bring light to these issues and help the people that are forgotten."

ICE spokesman Bryan Cox said shortly after Abraham-Joseph was taken into custody that he was arrested in a targeted operation that had been planned weeks to months in advance.

Cox said at the time that Abraham-Joseph had overstayed his visa and also was convicted on felony drug charges in Fulton County, Georgia, in October 2014.

Abraham-Joseph's lawyers have disputed that he has a felony conviction on his record.

"He has a singular offense for marijuana when he was a college-age person," Spiro said in the television interview. "That's vacated, sealed. There's no issue."

Fulton County prosecutors have said they can't comment on the case, which they say was handled under the state's first offender law and is sealed.

An Atlanta police report from August 2014 says Abraham-Joseph was riding in a car driven by another man when officers stopped the car after an illegal U-turn in four lanes of traffic. During a search of the car with a police dog, officers found a jar containing 22.6 grams (0.8 ounces) of marijuana, 89 hydrocodone pills, a scale in plain view, two loaded guns and $1,775 in cash the report says.

A notice of seizure and forfeiture filed in Fulton County Superior Court in October 2014, says the $1,775 seized during the arrest is to be forfeited. It says the violation of law alleged is that Abraham-Joseph and the other man possessed marijuana.

Abraham-Joseph was nominated for two awards at the Grammys, including record of the year for "Rockstar" alongside Post Malone. His second solo album "I Am I Was," released in December, debuted at No. 1 on the Billboard 200 albums chart.