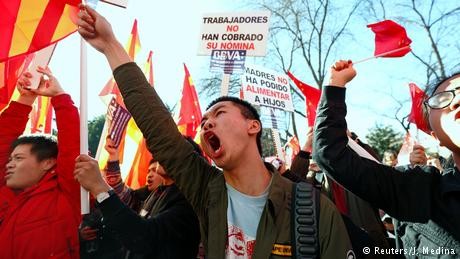 Hundreds of ethnic Chinese — Chinese and Spanish nationals alike — staged a protest outside the BBVA building in Madrid on Friday, claiming that their personal bank accounts had been frozen without notice.

Accusing the bank of being racist, demonstrators demanded access to their accounts and called for justice, local media reported.

Some waved Chinese and Spanish flags – another carried a banner which read "stop banking racism."

Protesters told AFP other banks had also blocked the accounts of Chinese citizens, but not to the extent that the BBVA, the country's second-largest bank, had.

The woman accused the bank of blocking her account as well as those of her daughter and her restaurant. She said she was forced to open an account at another bank.

The BBVA said the accounts were frozen as part of its anti-money laundering practices. It explained that it was required by law to confirm its customers' identities and incomes.

"BBVA bank is blocking all the accounts of Chinese citizens, even Spanish citizens of Chinese origin," he said.