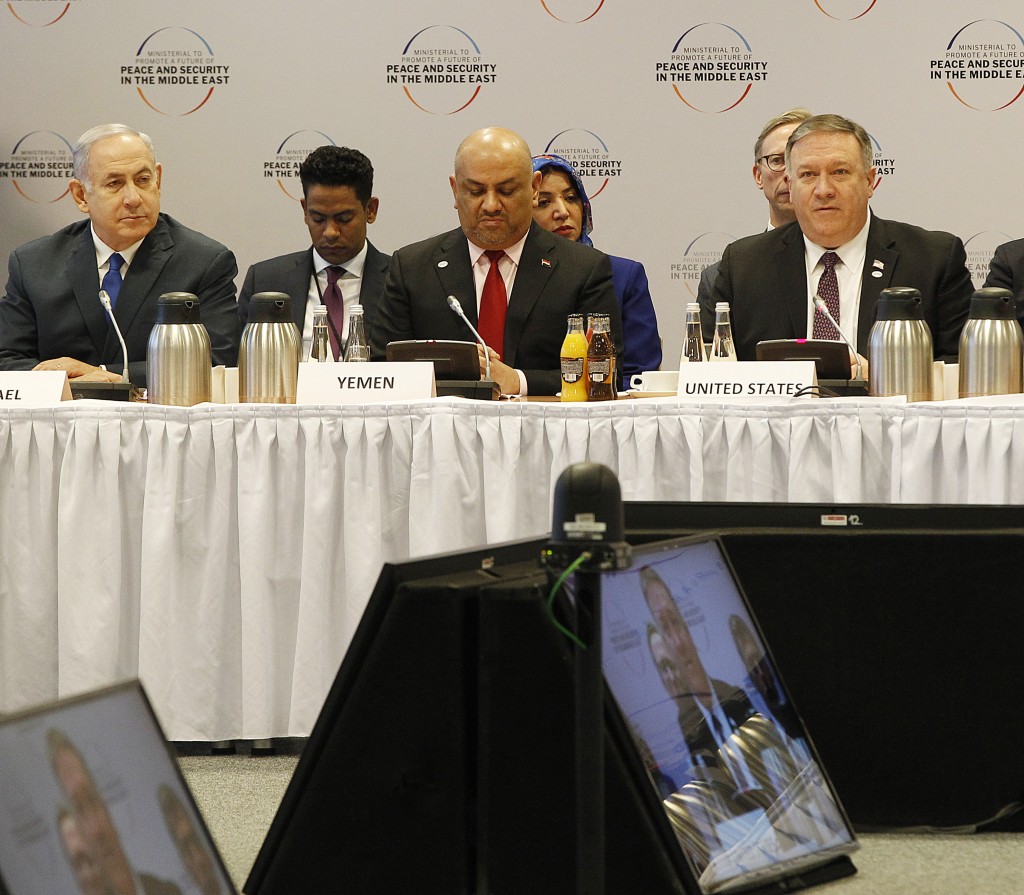 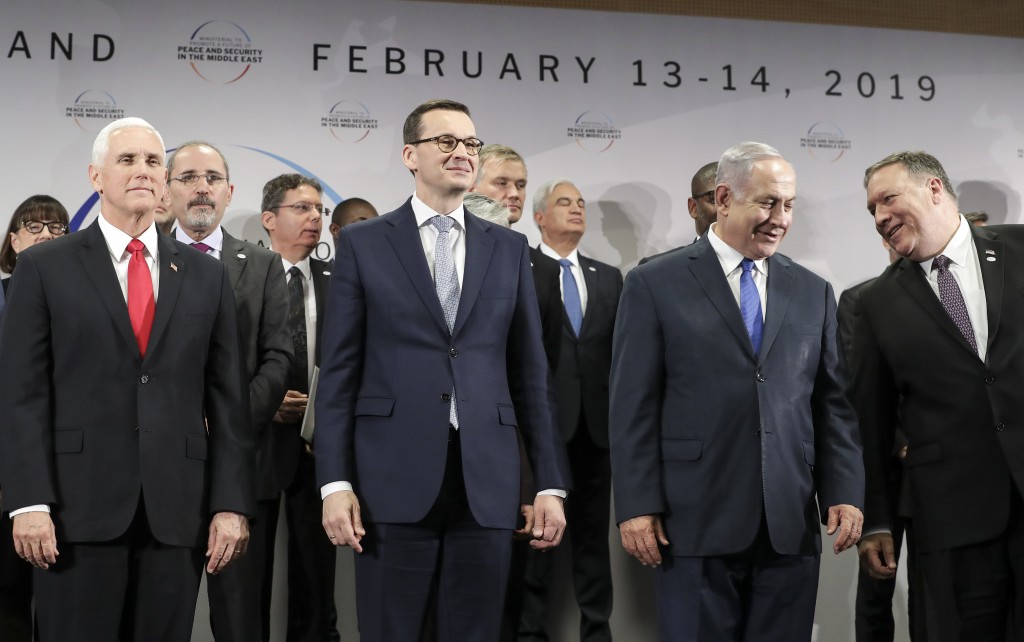 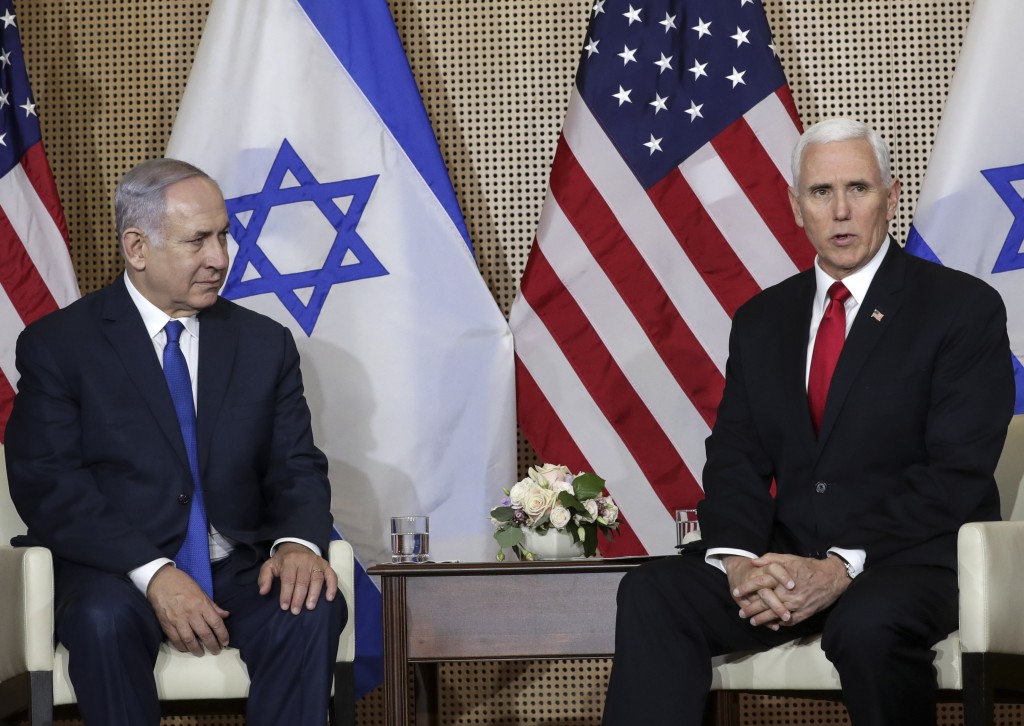 WARSAW, Poland (AP) — A two-day security conference in Warsaw was supposed to be a crowning achievement for Israeli Prime Minister Benjamin Netanyahu, stamping a seal on his long-held goal of pushing his behind-the-scenes ties with Arab leaders into the open. Instead, the publicity-seeking Israeli leader made one embarrassing misstep after another, distracting attention from his main mission and sending his aides into a nonstop cycle of damage control.

Political opponents at home hammered a string of Netanyahu's comments on the diplomatic journey, accusing him of politicizing the military for electoral purposes, leaking a sensitive video that embarrassed Arab Gulf states and apologizing to Poland for another dustup over its role in the Holocaust. Meanwhile, Netanyahu's spokespeople were sent scrambling to clarify he didn't mean to encourage war with Iran and that a low-level assistant had accidentally shared the sensitive video.

The missteps began even before takeoff late Tuesday, when before his flight to Poland he told reporters traveling with him that Israel was constantly acting against Iran in Syria, adding "even yesterday." It was an apparent reference to an undeclared airstrike that again chipped away at Israel's increasingly crumbling policy of ambiguity about its actions in Syria.

"There's one line that must never be crossed. Breaching military confidentiality and bragging about Israeli secret operations can pose a threat to our soldiers," said Benny Gantz, a former military chief and Netanyahu's primary challenger in the upcoming April elections. "Leveraging Israel's security, the highest and most sacred of values, for the sake of campaigning is where we draw the line — and it has to stop."

It didn't get much better for Netanyahu on Polish soil, where some 60 countries took part in the summit, including five Arab foreign ministers making a rare public appearance alongside Netanyahu in a joint show of unity against Iran.

In an off off-the-cuff interview with reporters on a Warsaw street shortly after meeting Oman's foreign minister, Netanyahu appeared to call on other participants of the conference to unite around "the common interest of war with Iran." Although he used the Hebrew word "milchama," or war, his office later changed its official translation and said he was referring to a "common interest of combatting Iran."

Then on Thursday, his office briefly leaked a video to journalists showing Bahrain's foreign minister, Khalid Al Khalifa, and representatives of Saudi Arabia and the United Arab Emirates playing down the Israeli-Palestinian conflict and harshly criticizing Iran. All three nations are well-known critics of Iran, but sharing their addresses to a closed gathering could nonetheless prove embarrassing.

Netanyahu's office said the video's release was a "technical error" and quickly deleted it. But others didn't believe it.

"Bibi's filming and leaking of things said in a closed meeting for internal electoral needs is an act that is not done," tweeted former Foreign Minister Tzipi Livni, referring to Netanyahu by his nickname and adding that relations between nations depend on trust between their leaders. "Foreign policy is not internal politics."

Adding to his troubles, his office was forced to clarify he was not singling out his Polish hosts as a nation when he told reporters during a briefing that "Poles cooperated with the Nazis." Some media outlets reported him saying "the Poles," which set off an angry rebuke from Polish authorities, including a summoning of the Israeli ambassador.

Last year, Poland and Israel were embroiled in a bitter dispute over a Polish law that made it a crime to blame the Polish nation for complicity in the Holocaust. Israeli officials saw it as an attempt by Poland to suppress discussion of the killing of Jews by Poles during and after the wartime German occupation. Netanyahu faced criticism from historians in Israel for not opposing the law, which critics said distorted history.

In the briefing, Netanyahu rejected the suggestions. His office said he was misquoted, though, and blamed the misunderstanding that had upset the Poles on an editing error in an Israeli newspaper.

"Instead of the Poles apologizing to us for the millions who perished in Poland during the Holocaust and for their assistance to the Nazis, Netanyahu for the second time apologizes to them," responded Yair Lapid, leader of the opposition Yesh Atid party and the son of a Holocaust survivor. "This visit of his to Poland has turned into a complete disaster."

If Netanyahu was seeking a respite from the trip's various snafus with a pleasant flight home, he didn't get that either. He was forced to spend an extra night in Warsaw after his plane was damaged shortly before takeoff, marking an inauspicious ending to the turbulent visit.

The prime minister, his wife and the entire entourage were on-board an El Al-chartered Boeing 777 early Friday when a vehicle towing the aircraft on the runway crashed into it. A photo circulated to traveling journalists showed large scrapes in the underbelly of the aircraft.

Netanyahu and his wife were taken off the plane and escorted back to their hotel in the city. Other aides, including Netanyahu's national security adviser and his military secretary, spent the night on the damaged aircraft, saying they did not want to go through the hassle of pre-boarding security checks again.

A replacement plane was dispatched from Israel to urgently return the prime minister, and the observant Jews in his delegation, before the beginning of the Jewish Sabbath, when travel is prohibited for Orthodox Jews.

At least that went according to plan. The plane landed back at Israel's Ben-Gurion Airport in the late afternoon, about an hour and a half before the Sabbath began at sundown.