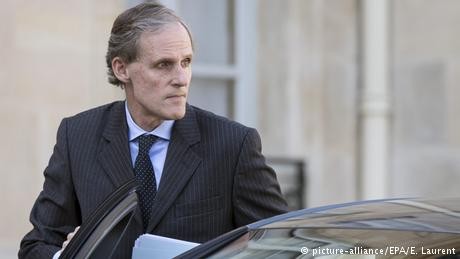 France is redeploying its ambassador to Italy on Friday, French officials said, in an apparent bid to heal the rift that saw its envoy Christian Masset recalled eight days ago.

The two leaders talked about "how important the friendship between France and Italy is, how much the countries need each other," Loiseau told RTL radio.

The spat erupted when Deputy Prime Minister Luigi Di Maio traveled to France to meet the representatives of the "yellow vest" protesters. Di Maio has repeatedly praised the protest movement and criticized the French government's response. Following the meeting with French activists last week, he tweeted that "the wind of change has crossed the Alps."

Di Maio's said he was in France as a leader of his party and working on creating a common front ahead of the EU Parliament election in May. But the move prompted outrage in Paris, with French Foreign Minister Jean-Yves Le Drian telling Italian Corriere della Sera daily that a "line was crossed."

Di Maio, who also serves as Italy's minister of economic development, "met someone who has called for armed insurrection and for the intervention of the army," Le Drian said.

Tensions between Paris and Rome have been growing for months, with officials from the two populist parties making up the Italian ruling coalition harshly criticizing the administration led by French President Emmanuel Macron. The leader of Italy's right-wing Lega party, Matteo Salvini, has described Macron as a "terrible president," repeatedly slammed him over migration, and recently criticized France for "stealing" Africa's wealth. Salvini also serves as the country's interior minister and also a deputy prime minister.