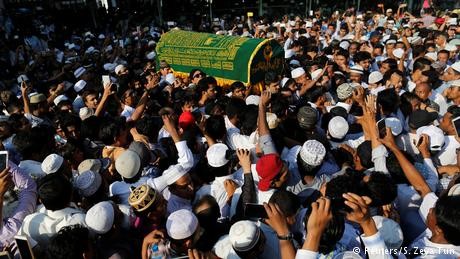 A Myanmar court sentenced two men to death and two others to prison terms on Friday over the 2017 killing of lawyer Ko Ni, a senior member of the National League for Democracy (NLD) party. Ko Ni served as a legal advisor to Aung San Suu Kyi, who is the de facto leader of the country.

One of the men sentenced to death, Kyi Lin, shot Ko Ni in the head at a point blank range at Yangon international airport. The lawyer was getting into a taxi after flying back from an official trip to Indonesia. The gunman then shot and killed the taxi driver who tried to pursue him.

The court also passed the death penalty on defendant Aung Win Zaw, who hired the shooter and was involved in planning the murder. Another defendant, Aung Win Htun, was sentenced to three years in prison for helping Aung Win Zaw. Another member of the group, Zeyar Phyo, received a five-year-sentence for bankrolling the killing.

However, authorities and the Interpol are still looking for the fifth suspect, Aung Win Khine, believed to be the mastermind behind the assassination.

Ko Ni was a prominent legal expert and a close aide to Aung San Suu Kyi, the embattled Nobel Peace Prize winner who serves as "state counselor" in Myanmar under the massive influence of the country's powerful military.

The late Muslim lawyer is credited with creating the state counselor post for Aung San Suu Kyi to bypass the nation's constitution, which gives wide-ranging powers to the military. At the moment of his death, just weeks before his 64th birthday, Ko Ni was allegedly working on a whole new draft of the constitution.

The military leadership denied speculation about their involvement. During the investigation, Interior Minister Lt Gen Kyaw Swe said the authorities believed the hit had been motivated by a "personal grudge" and "extreme sense of nationalism."

Ko Ni had often faced insults and hate speech from Buddhist hardliners over his religion and activism in favor of the country's Rohingya minority. Both Aung San Suu Kyi and the military are under fire internationally over the brutal crackdown of the group.