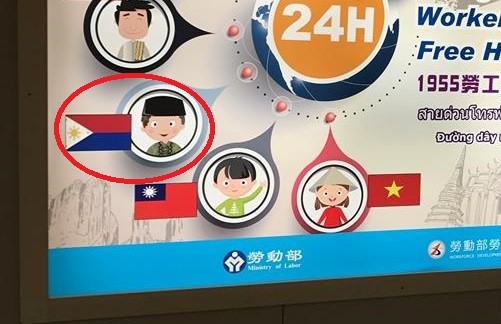 TAIPEI (Taiwan News) -- The Ministry of Labor (MOL) today issued a statement yesterday (Feb. 14) apologizing for inadvertently placing the Philippine national flag upside down in a state of war in two advertisements at the Taiwan Taoyuan International Airport.

An overseas compatriot from the Philippines noticed that the national flag of the Philippines had been placed upside down in an advertisement in the Taiwan Taoyuan International Airport, and on Feb. 13 posted a photo of it on Facebook.

On Feb. 14, the ministry issued a press release to express its sincerest apologies to the Philippines and said that it would be more prudent in dealing with related maters in the future. The ministry said that the mistake had been made in two light box advertisements for its 1955 foreign workers' free hotline in the A4 and A14 sections north corridor for the Immigration Department inside the Taiwan Taoyuan International Airport.

In her post, the Philippine overseas compatriot wrote the following:

Dear Ministry of Labor, I saw a poster in the Taoyuan Customs area which had the Philippine flag placed erroneously! The Philippine flag has blue on top, and only in times of war is red place on top! I don't know how to explain it to this unit..."

The MOL conceded that during the proofreading process it had not discovered that there had been two versions of the Philippine flag made. The MOL claims that all publications have since been checked, and only the two light box advertisements in the airport were found to have depicted the Philippine flag in error.

However, the flag has a unique feature in that if it is flown upside down with the red stripe on top, it signifies that the country is in a state of war. Philippine flag as it is normally flown. (Wikipedia image)