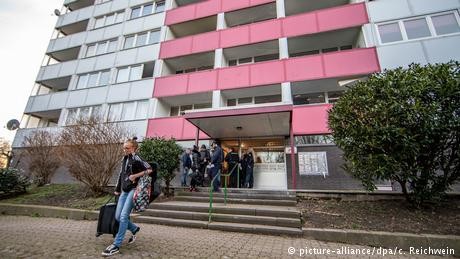 Officials in Duisburg said its emergency housing office was ready to help evicted residents find temporary accommodation after two high-rises in the western German city were deemed unsafe. But city officials also said responsibility — including for the costs incurred — lay with the towers' owner, an Austrian concern, according to WDR public television.

If a fire broke out, residents would have found themselves in "acute" danger, said city hall in a statement, justifying its hurried intervention.

One resident said she had just learned that "I must leave my apartment — like all the other residents — within four hours."

"No one from the houses knows where he should go," said another resident outside the 12-story towers in Duisburg's Husemann Strasse.

"There is a densely branched system of shafts that lead into individual apartments and stairwells, through which smoke can spread unhindered in the event of a fire," Haack told WDR.

The buildings' main entrance locks were changed by a locksmith to prevent unsupervised entry. In the coming days, residents would be allowed briefly to recover goods and possessions, WDR reported.

High-rise safety across Europe was highlighted in June 2017 by London's Grenfell Tower fire that killed 72 people and was blamed on flammable external paneling.

Duisburg in 2010 was the scene of Germany's fatal Love Parade that claimed 21 lives and left more than 650 visitors injured by a stampede at a music festival.

Duisburg in September last year ordered precautionary high-rise evacuations of two families when it found a fire ladder height-limit had been exceeded.

DW editors send out a selection of the day's hard news and quality feature journalism. You can sign up to receive it here.