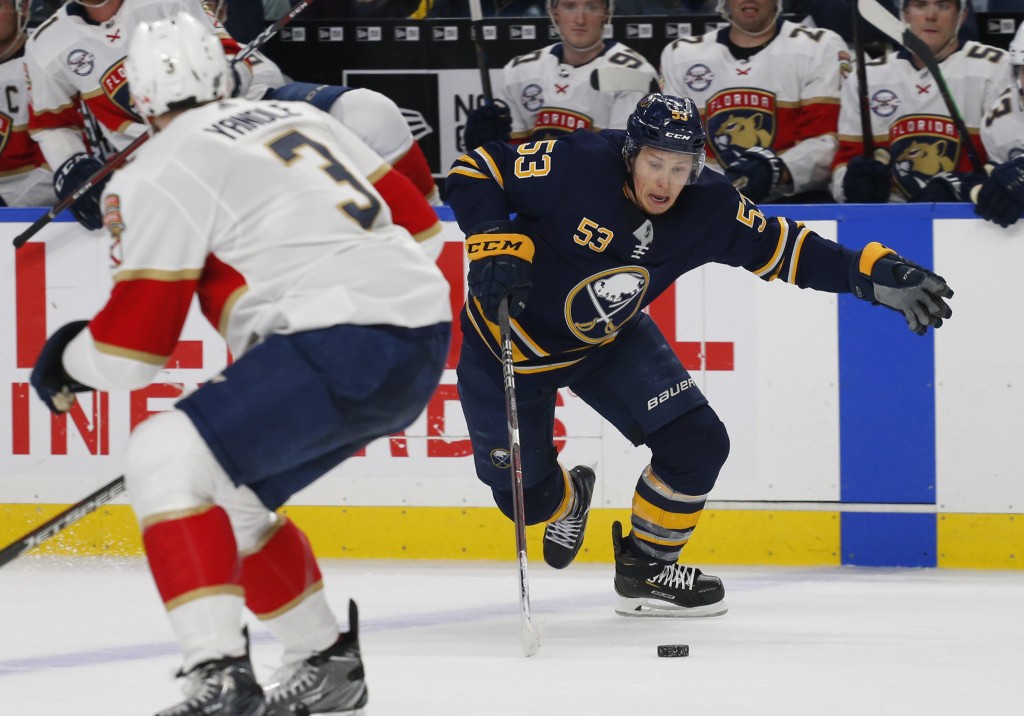 BUFFALO, N.Y. (AP) — Jeff Skinner knows how much the Sabres and their playoff-starved fans want him to stay in Buffalo beyond this season.

"Ha, ha, I've heard," the forward memorably said with a laugh in December. "I'm having a lot of fun, too."

And yet, two months later, Skinner is nowhere closer to providing anything resembling a definitive answer regarding where he'll be playing once his contract expires after this season.

"The present is still where we are, and that sort of thing will play itself out," he said Thursday. "I think there's no point in really talking about it now because there's nothing really to talk about from me on my end."

Skinner, however, can't hide his emotions when asked how much he enjoys Buffalo.

His eyes brighten and he breaks into wide, toothy smile in saying: "I like it here. Yeah, I like it."

Cast off by Carolina as part of the Hurricanes' latest rebuilding plan, the three-time 30-goal-scorer and 2011 NHL rookie of the year is approaching career-best numbers since being traded to the Sabres in August.

H has a team-leading 34 goals —e three short of matching a career high — and is second in the NHL behind Washington's Alexander Ovechkin (38). His seven game-winning goals are second in the NHL and most in Buffalo since Derek Roy had nine in 2008-09. Skinner has been so consistent, his longest goals drought was four games to start the season.

And he and captain Jack Eichel have been inseparable on a top line that's played a significant role in keeping Buffalo in playoff contention in a bid to end a seven-year postseason drought, and on a team that finished last in the overall standings in three of the previous five years.

Despite going 11-15-5 since a 10-game win streak in November, the Sabres (28-21-7) already have 63 points — one more than they had last season — and sit 10th in the Eastern Conference, four points behind eighth-place Pittsburgh.

The topic of Skinner's future is once again rising to the forefront with the NHL's trade deadline looming on Feb. 25, and after Skinner was spotted having a lengthy conversation with his agent, Don Meehan, following a 3-1 win over the New York Islanders on Tuesday.

"To me it was just checking in," Skinner said, referring to the meeting. "No details to discuss. Nothing really to report."

As for the approaching trade deadline, Skinner shrugged and said: "I don't think about it at all."

It remains unlikely the Sabres will consider trading Skinner by Feb. 25.

General manger Jason Botterill told The Associated Press in December he didn't consider that date as being a deadline for contract talks. And there has been no indication — publicly or privately — that Botterill's stance has changed since.

Botterill has maintained regular contact with Meehan, and has said he wants Skinner to focus on playing and familiarizing himself with his new surroundings. What bolsters Botterill's hopes is noting how Skinner chose to play in Buffalo by waiving his no-trade clause in a deal the Hurricanes acquired prospect forward Cliff Pu and three draft picks.

Eichel laughed when asked if he's aware of Sabres fans campaigning for Skinner to stay.

"He has how many goals, 34?" Eichel said as Buffalo prepares to close a seven-game homestand against the New York Rangers on Friday. "I'm sure Sabres fans want him to stay. I mean, would they want him to leave?"

Eichel's certainly on board, too.

"I'm not Skins' agent. I'm not our GM, but he's been a big part of our team this year," he said. "You could probably say we wouldn't be here if it wasn't for him."

It will ultimately be up to Skinner to decide.

One positive is how much the Toronto-born player has enjoyed playing closer to home, and having his family attend games in Buffalo (essentially a two-hour drive) as opposed to Raleigh, North Carolina (roughly a two-hour flight).

Coach Phil Housley noted Skinner's proximity to home and family has provided incentive. And it helps playing alongside Eichel.

"Jeff finds that open area, he's a positional player, and Jack seems to find him in those areas," Housley said. "They just seem to have a great chemistry together."

Skinner must also weigh what offers he might command in free agency at a time more teams are spending less in free agency and committing more salary cap-space to re-signing their own players.

All that can wait.

"As a player, you can only sort of control a small number of things," Skinner said. "For us right now, that's moving on to tomorrow's game and getting ready for that."