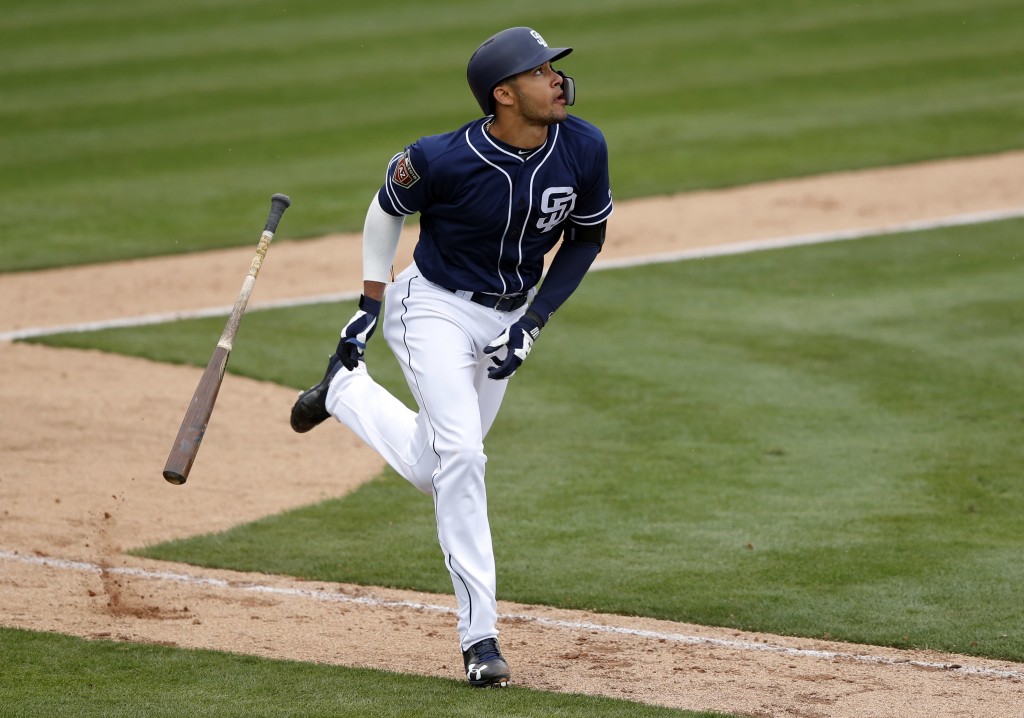 PEORIA, Ariz. (AP) — Fernando Tatis Jr. has one goal during his second spring training with the San Diego Padres — make the team.

The Padres might not bring him up right away, but there's a good chance the son of former big leaguer Fernando Tatis will make his major league debut at some point this season for rebuilding San Diego.

Fans certainly are eager to see the 20-year-old shortstop light up Petco Park with his flashy style of play.

"Same thing as always, come play baseball and do what I know how to do and keep having fun as always," he said.

But Tatis, the No. 2 prospect overall in all of baseball, knows it's a little different this year.

"There's a reality now. There's a chance it might happen. I'm just working hard for it," he said.

While his goal is to make the team, Tatis knows that "always in this game you've got to get better, learn, keep learning from these guys, ask a lot of questions from the guys with experience, and bring the show."

Tatis can certainly do that, even though he's only played 2 ½ months above Single-A. The Padres might opt to have him start the season in Triple-A. There's also the thought the Padres might delay his arrival in the big leagues in order to keep from starting his service time clock.

Tatis said he needs to "show my game. They already have seen me a lot. If I prove I can do it over here, I think they'll make the decision."

He broke his left thumb while sliding headfirst in July and missed the rest of the season. He more than made up for the lost time with a successful stint in winter ball.

He went back home to play in the Dominican Winter League with Estrellas Orientales. In 23 games, he hit .263 with three home runs, one of which made waves well beyond his home country.

After Tatis smacked a game-winning three-run home run in the playoffs, he chucked his bat straight up into the air in pure jubilation, sending the dugout and crowd into a frenzy. It was the most talked-about bat flip since the infamous bat flip by Jose Bautista in the 2015 American League Division Series.?

"I like guys being themselves," manager Andy Green said about the bat flip. "He plays with a ton of life and personality, I think it's fun. That might have been a little higher than most guys do, but it's common to see that over there. I love winter league baseball and the passion and energy they play, the emotion they play with on the field. It would probably be better here in the states to have a little bit more of that life on the baseball field, move past the conventional rules of the game that people have held here for so long and let people be themselves on the field. I've been encouraging guys to just be themselves and if that is a bat flip, that's not going to bother me at all."

Tatis said he's in great shape after playing winter ball, and that he took away some valuable lessons.

"Being more consistent and playing under pressure," he said. "Just showing them that I can do it during special occasions. I really grew up as a man and a baseball player, too. It was fun, winning a championship for my hometown and breaking the 51 years without winning. It was very special."

He's always been around the game thanks in large part to his father, who played 11 seasons in the big leagues. Tatis Jr. signed with the Chicago White Sox as an international free agent in 2015. He was traded to the Padres a year later as part of the package that sent James Shields to the White Sox.

Even before Tatis has made his big league debut, there has already been chatter that he possibly could be moved at some point to third base, where the Padres have a glaring hole.

"Maybe in 12 years, I will move over to third base," he said with a laugh. "But I've been working on my body and focusing and I think I'm?going to stay there (at shortstop). I'll be?there?for a couple years."