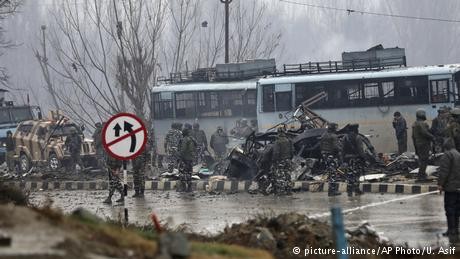 At least 33 soldiers were killed and 40 others wounded on Thursday in a car bomb attack on a paramilitary convoy along a key highway in Indian-controlled Kashmir, security officials said.

Muneer Ahmed Khan, a senior police officer, said the attack occurred as the convoy reached southern Lethpora town on the outskirts of the disputed region's main city, Srinagar. He said one bus was destroyed and at least five other vehicles were damaged by the blast.

A paramilitary official said the bus was carrying at least 35 soldiers. Authorities blamed rebels fighting against Indian rule for the attack.

Khan said soldiers and counterinsurgency police reinforcements had been deployed in the area.

Sanjay Sharma, a spokesman for India's paramilitary Central Reserve Police Force, said many of the injured were in critical condition. "The blast was so powerful that one cannot recognize whether the vehicle was a bus or a truck. Just pieces of mangled steel remain of the vehicle," he said.

Germany's Foreign Office responded to the incident, saying: "We condemn terrorism in all its forms. Germany stands by its strategic partner India."

Kashmir Governor Satya Pal Malik accused Pakistan of being responsible for the attack.

"Visibly it seems to be guided from across the border as Jaish-e-Mohammed has claimed responsibility," Malik said in a statement. "Such actions will not deter the resolve of our security forces ... we will finish these inimical forces to the last."

Indian Prime Minister Narendra Modi has condemned the attack in a tweet. "I strongly condemn this dastardly attack. The sacrifices of our brave security personnel shall not go in vain," he said.

Kashmir experienced many car bombings from 2000 through 2005 which inflicted high casualties on Indian troops.

Indian soldiers are ubiquitous in Kashmir, and local residents make little secret of their anger toward their presence.

Pakistan and India each claim the divided territory of Kashmir in its entirety. Rebels have been fighting Indian control since 1989.

Most Kashmiris support the rebels' demand that the territory be united either under Pakistani rule or as an independent country, while also participating in civilian street protests against Indian control.

About 70,000 people have been killed in the uprising and the ensuing Indian crackdown.