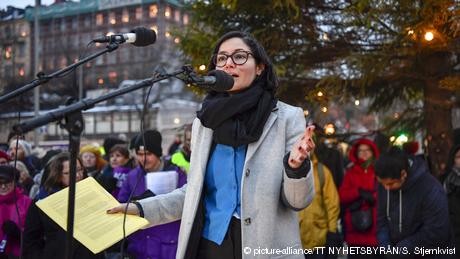 They call themselves antiracist feminists and drew international attention with media-friendly antics, such as burning 100,000 Swedish kronor (€10,000, $13,000) to underline pay inequity. Now Sweden's Feminist Initiative has elected a new leadership team to guide the way in the tough contest to defend their one seat in the European elections in May.

Read more: In German politics, women still have a long way to go

"We need to have people who have not only the knowledge but also the experience of being in those bodies that usually are discussed," said Gita Nabavi, who was re-elected to lead the party together with Farida al-Abani on Sunday, "like being a woman in the room when women's salaries are being discussed, or being a transgender person in the room when we're discussing health issues or health care for transgender people."

Perhaps a party like FI could only have emerged in a place as conscious of issues of equality as Sweden. The country is known for its strong social security net, including policies that allow both mothers and fathers 480 days of paid leave to care for their children. Many view the country as a role model when it comes to gender equality, a label the government underlined in 2014 when it announced it was pursuing a feminist foreign policy to promote human rights for girls and women globally. Discrimination based on sexual orientation was banned in 2011.

"We [in Sweden] have this idea that we are already there in terms of equality between the sexes," said Nabavi. "But if we look at statistics there's still quite some distance to go for equal pay, for equal parental leave, equal pensions, when it comes to unpaid work at home, taking care of the household and taking care of our elders and our children and so on."

But it goes beyond feminism, Nabavi said. "Feminist Initiative is not only a feminist party — we're also an antiracist party. That's a huge part of our ideology and our way of working."

Sweden was already made up of a diverse mix of ethnicities before the influx of refugees into Europe in 2015, when it became the destination for hundreds of thousands of Syrians fleeing war. One in four people living in the country in 2017 was born abroad, according to Statistics Sweden, a government agency.

The diversity of FI makes the party special. The party's co-leaders are both immigrants who came to Sweden as children, from Iran and Libya respectively. Many of its spokespeople come from minority communities.

FI's approach has borne fruit. The party took home 5.3 percent of the vote in the 2014 European elections in Sweden.

That came as a surprise to the country's mainstream parties, said Kimberly Cowell-Meyers, an assistant professor in the Department of Government at American University.

"You get this moment in May when the Feminist Initiative wins a seat, and then the general election is in the fall," she said. "That's really when everybody's going: 'Who are these people, and what do they stand for, and how can we steal their thunder, because we don't want to look like we're lousy on these issues.'"

The mainstream parties sat up and took notice — and began to integrate FI's core issues into their platforms, Cowell-Meyers found after examining the parties' election manifestos over the years. All seven mainstream parties, from left to right, decried women's larger share of domestic labor in their 2014 platforms. Four of the seven called themselves "feminist" or said they had adopted a "gender-conscious perspective," she found.

"Our presence is pushing the parties in a more equal and a more diverse direction," said Gita Nabavi. "We're kind of setting the bar higher, not just for ourselves but for the other parties. And we can see the effect of that."

FI won only 0.4 percent in the September general election, failing by a long shot to reach the 4 percent barrier to hold seats in parliament.

Cowell-Meyers said typically niche parties like FI come into existence when the time is right and tend to disappear once their issues get taken up by other parties.

But Nabavi put the poor election result down to the growth of nationalistic movements like the Sweden Democrats, which she described as being part of a backlash. She also contended that Feminist Initiative played a big part in the pushback against far-right movements gaining more power in Sweden.

And Mid Sweden University's Sofie Blombäck argued that the election results weren't all bad for FI: They defended or gained seats in 13 municipalities.

"This gives them a platform to build on and to continue to exist. Organizationally they get some public funding and some people who gain political experience. Traditionally that's how Swedish parties have established themselves; it has been from the local level — the Greens did it, the Christian Democrats did it, the Sweden Democrats did it. They start at the local level and over many electoral cycles build towards making a national breakthrough."

Now the party's one MEP, Soraya Post, faces an uphill battle for re-election to the European Parliament.

Nabavi said the party was putting on the finishing touches before launching this year's campaign.

Post had been behind the campaign slogan that led to her becoming the first Swedish Romani in the parliament: "Out with racists! In with feminists!"