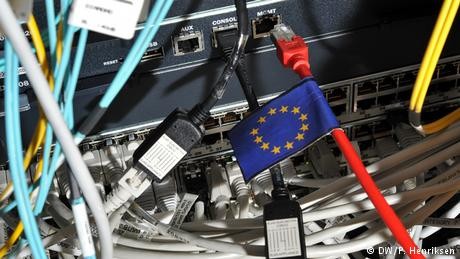 For two years, lobbyists, internet stakeholders, publishers, media professionals and online activists have been hard at work influencing the institutions of the European Union on the reform of copyright in the digital age.

A compromise has now been reached that won't bring about "the end of the internet," nor will it offer "absolute protection for authors" or a "bonanza for newspaper publishers" — some of the more vehement positions expressed by concerned stakeholders.

However, the planned reforms are not half as bad as they seem. Regular internet users who upload their content to Facebook, Instagram or YouTube are unlikely to be affected by the new copyright law. On the contrary: the responsibility for copyrighted content will shift from users onto the major internet platforms.

For example, the buck will now fall on YouTube to ensure that an uploaded video does not contain film excerpts for which it would have to pay. How the major internet platforms plan to monitor their content, and what technology they plan to use, is up to them.

There is no legal obligation in the draft of the new EU law to introduce so-called "upload filters" that would automatically block content. Instead, the EU is demanding that companies come up with their own solutions.

Of course, the internet giants can afford to employ people to sift through the material, as Facebook does to monitor for hate propaganda. But it's questionable whether this would actually be feasible; on YouTube, for example, up to 400 hours of new video material are published every minute.

In the end, automated filters will probably be used to do the job. But are these the same thing as "censorship," as critics have argued? We're already living in an age where internet content is filtered to some degree. Nipples, pornographic content and images of sporting events are blocked by US companies such as Facebook and YouTube. Around the world, online censorship is hardly a new phenomenon. In Russia, China, Iran and the United Arab Emirates, to name just a few countries, many forms of content are blocked by the state, and users are also partially monitored online. Compared to this, the EU's attempts to protect copyrighted material seem rather modest.

Freedom of art and freedom of expression are unlikely to be affected by the new rules. Memes — viral images often combined with humorous texts — have been explicitly excluded from the laws. Instagram and Snapchat can rest easy.

The introduction of the "ancillary copyright" law is also to be welcomed by newspaper publishers. Under the new law, major internet platforms that earn money using external content — for example, from newspapers, magazines, TV or radio broadcasts — will be required to pay the authors of that content. In Germany and Spain, such a rule already exists, but now, logically, it will be implemented across the entire EU. Smaller internet companies and startups will, sensibly, be excluded from the regulations, in order not to hinder economic development.

The now-negotiated proposal for a revision of the copyright law was desperately overdue. The last amendment was made well before the arrival of Facebook, Google and smartphones. Some details will likely still be changed over the course of the legislative process. And it is also possible that the European Parliament, in the ensuing heated debate about the alleged end of the free internet, could ultimately overturn the entire proposal. But that would be a mistake — it would take years to come up with a new revision, and to have all parties agree.

If and how the new law will take effect, and whether it results in remuneration for copyright holders, crucially depends on the reaction of the internet companies spread around the world.

For example: if Google claims that article X from newspaper Y did not generate any advertising revenue on the company's news page, it would be difficult to prove otherwise. And if the servers on which these pages are generated are located outside Europe, it will be difficult to find a court that has jurisdiction over the case.

The EU's approach is correct, but whether the new law will have a positive or negative impact is by no means a given.