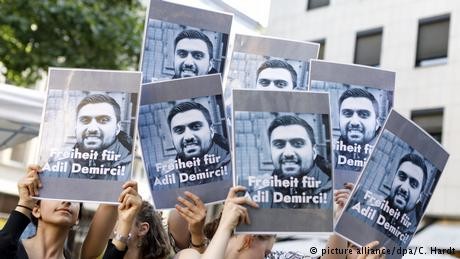 Cologne reporter and social worker Adil Demirci was in court in Istanbul as his trial on terror charges resumed on Thursday.

The 33-year-old has spent ten months in jail over alleged links to the far-left Marxist-Leninist Communist Party (MLKP) which Turkey labels a terrorist organization.

Prosecutors proposed his release, on condition that he regularly register with Turkish police. That propspect would rule out a return to Germany.

The charges in detail

Demirci and a group of over 20 other people were accused of attending funerals of MLKP members and fighters of the Kurdish YPG militia. Turkish officials view YPG, which battles against Islamic State (IS) in Syria, as an offshoot of the Kurdish PKK party, which is also considered a terrorist group.

Prosecutors also claim Demirci took part in "non-authorized demonstrations involving Molotov cocktails" between 2013 and 2016 and did so "in the name of the MLKP."

Demirci, a dual German-Turkish national, traveled to Turkey with his mother on vacation last spring. According to his family, the aim was to improve the health of his mother, who is suffering from cancer. He was arrested in Istanbul last April, just days before he was set to fly back to Germany.

After his arrest, Demirci admitted to going to the funerals of Kurdish fighters who died fighting IS in Syria, but rejected the charge of belonging to "terror organization."

In Cologne, Demirci worked as a refugee counselor for German NGO Internationaler Bund and also reported for the left-leaning, Turkish-based news agency ETHA. Mesale Tolu, another German-Turkish journalist facing charges in Turkey, is also an employee of the agency.

Several German officials traveled to Istanbul for the Thursday court appointment, including a SPD parliamentarian Rolf Mützenich, and the Cologne town councilor from the Left party, Jörg Detjen. Germany's Consul General Michael Reiffenstuel was also present at the Istanbul courtroom.

Writer and journalist Günter Wallraff also traveled to Turkey for the hearing.

"This is not about the rule of law, this is a political trial," Wallraff said.

Demirci's family and friends had set up the "Freedom for Adil Demirci" campaign in Cologne, holding vigils and events demanding his release.