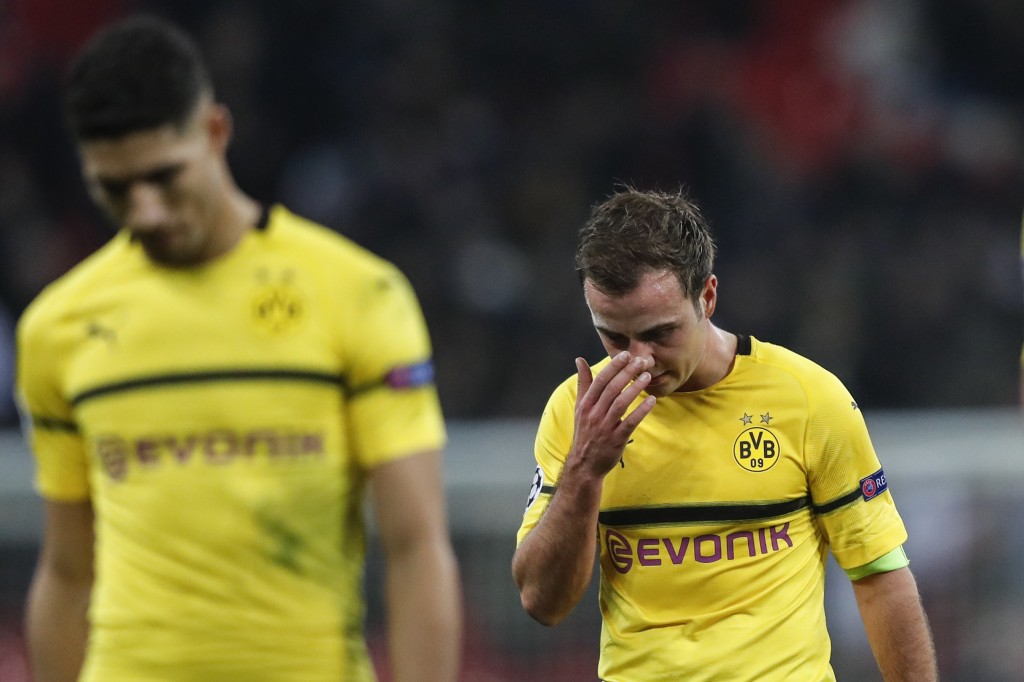 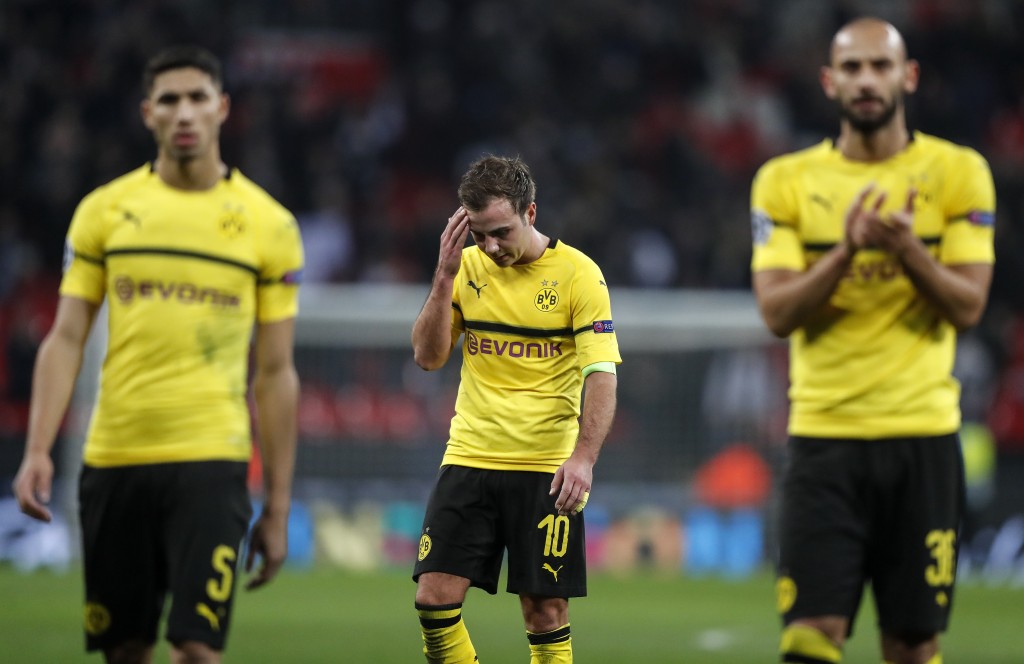 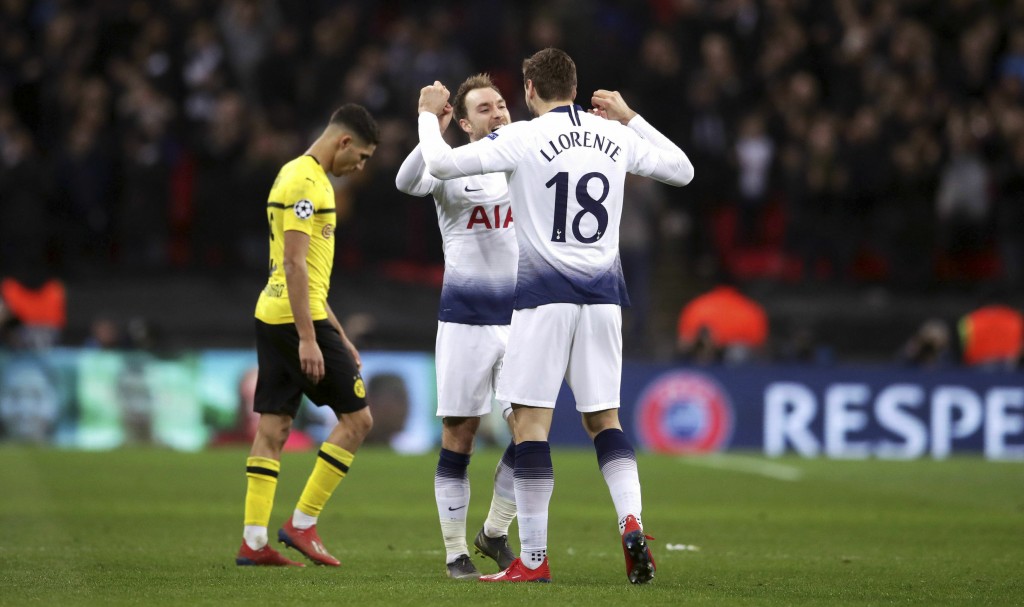 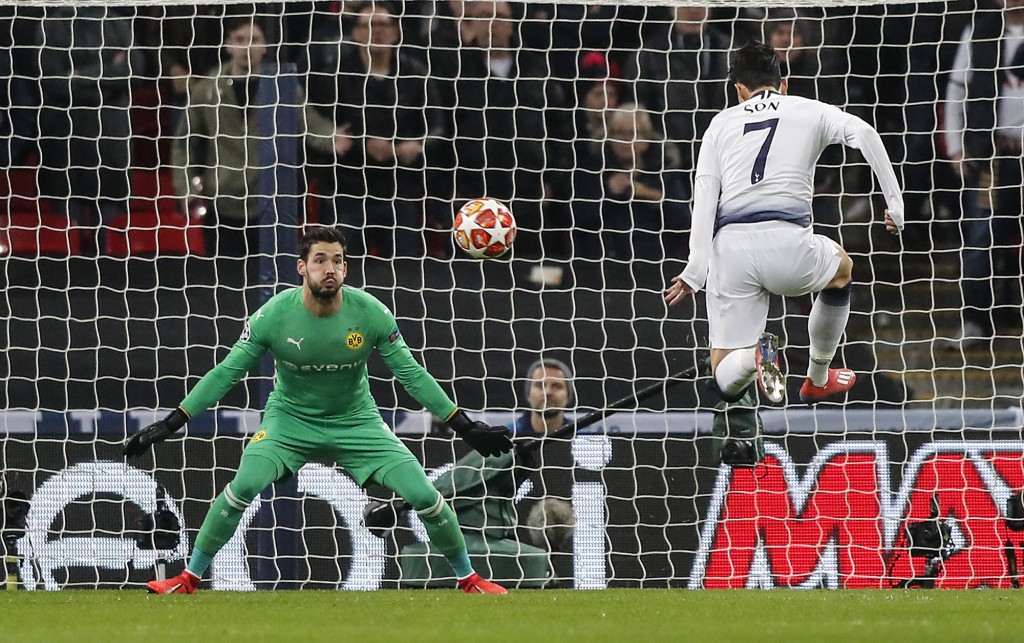 Dortmund has failed to win any of its four games in February and has developed a propensity for collapsing toward the end of games. It has conceded nine goals in its last three matches.

A 3-0 defeat at Tottenham on Wednesday leaves Dortmund on the verge of exiting the Champions League, and it came just days after it surrendered a three-goal lead in the final minutes to let Hoffenheim draw 3-3 in the Bundesliga.

The week before, Dortmund allowed a pair of extra-time goals in a German Cup round-of-16 game that Werder Bremen won on penalties.

The club has not won in the Bundesliga since a 5-1 rout of relegation candidate Hannover on Jan. 26. Dortmund still leads the league by five points but has Bayer Leverkusen to thank for beating second-place Bayern Munich, the six-time defending champion, on the day Dortmund was held to a 1-1 draw in Frankfurt.

It needs to figure out what has been going wrong.

"We're not defending well enough," Dortmund goalkeeper Roman Buerki said after the defeat to Tottenham. "It can't be that we concede so many late goals from set pieces in the last weeks. We have to defend rigorously."

Buerki suggested his team needs to get tougher, dig in more and get more physical.

"We always have difficulties when it's against robust teams because we can't stand up to it, especially from the front," Buerki said. "Sometimes you have to hit a long ball and if you don't have a strong player who can hold the ball, it's extremely difficult."

Dortmund was missing defenders Manuel Akanji and Lukasz Piszczek at Wembley Stadium and Dan-Axel Zagadou was only back after 10 weeks out injured. Marco Reus, Julian Weigl and Paco Alcacer were also out.

But Tottenham, third in the Premier League, was also missing key players in top scorer Harry Kane and midfielder Dele Alli. It had been considered a beatable opponent, one that would allow Dortmund to reach the quarterfinals of Europe's premier competition.

Now it looks unlikely, even if Sebastian Kehl, head of the club's licensed players division, still thinks there's hope in the return leg in Dortmund on March 5.

"I know what's in this team," Kehl said. "We can get one or more goals and have to try not to concede any."

Favre, who seemed to have strengthened Dortmund's backbone and resolved the fragility it displayed too often last season, will have to work on the players' mental side to avoid a league collapse. The Swiss coach anticipated setbacks along the way, but surely not a complete reversal of all of the good work so far.

"There are periods of a season when things aren't top, top, top," Favre said. "We need to analyze and work hard to avoid and correct these errors."

Bayern, which is looking at Dortmund's travails with glee, is unlikely to suffer too many more setbacks of its own and will aim to increase the pressure with a win in Augsburg on Friday.

Dortmund faces last-place Nuremberg, a team it defeated 7-0 earlier in the season, away on Monday. But Nuremberg fired coach Michael Koellner and sporting director Andreas Bornemann on Tuesday and is bidding for a fresh start under club favorite Marek Mintal and former assistant coach Boris Schommers.

Another potential pitfall awaits on Feb. 24, when Dortmund faces a visit from Leverkusen for a reunion with former coach Peter Bosz. Dortmund fired Bosz last season after nine games without a win, including the 4-4 draw with Schalke in which it gave up a four-goal lead.

Dortmund fans thought those days were over.

"We've experienced so many positives this season, so we're full of hope that we'll get back on track," Kehl said.