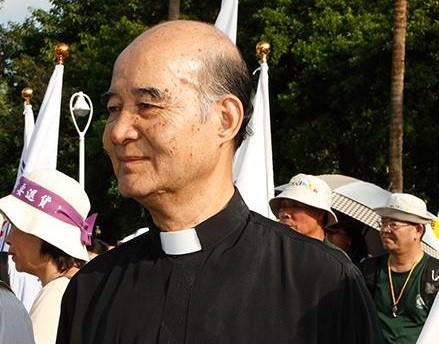 He played a key role in protests against Kuomintang Martial Law rule and remained vocal in helping human rights activists and the cause of Taiwan Independence until late in life.

In 1979, he helped democracy campaigner Shih Ming-teh (施明德), a later chairman of the Democratic Progressive Party (DPP), after the Kaohsiung Incident, a protest which was brutally suppressed by the government of President Chiang Kai-shek.

Kao’s actions earned him a prison sentence from 1980 to 1984. He remained one of the highest-profile participants in Taiwan’s democratization movement and independence campaign.

After the DPP won a presidential election for the first time in 2000, he was appointed senior adviser to the president.

He recently spoke out against same-sex marriage and co-signed an open letter calling on President Tsai Ing-wen (蔡英文) to refrain from seeking a second term in next year’s presidential election.

His grandfather was the first native Taiwanese priest for the Presbyterian Church, though it was not until he saw the poverty of Taiwanese students in Japan during World War II that his life took a turn toward the missionary life, the Liberty Times reported Thursday.