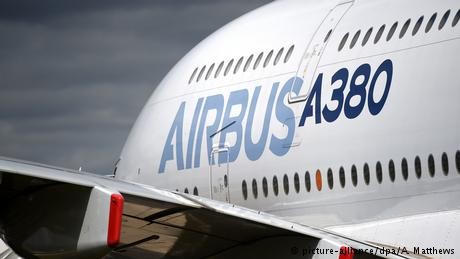 European aircraft manufacturer Airbus on Thursday announced it will end production of the A380 double-decker passenger jet in 2021.

The Franco-German company had hoped the superjumbo would challenge Boeing's 747 and revolutionise air travel in the 21st century.

What's behind the move?

Read more: Airbus's spurned A380 superjumbos to be stripped for parts

Dubai-based airline Emirates is the biggest A380 customer and had built its global brand around the model.

"Emirates has been a staunch supporter of the A380 since its inception," said Emirates Chairman Sheikh Ahmed bin Saeed al-Maktoum. "While we are disappointed to have to give up our order, and sad that the programme could not be sustained, we accept that this is the reality of the situation."

Airbus CEO Tom Enders called the superjumbo an "outstanding techincal and industrial achievement," adding that the announcement was "painful for us and A380 communities around the world."

What was the problem with the A380?

The world's biggest passenger jet started flying in 2008. The double-decker aircraft can seat more than 500 passengers. However, airlines were reluctant to commit to the costly plane and airports had to build new runways and modify terminals to accomodate it. The project suffered production delays and cost overruns right from the outset. The company was forced to restructure, costing thousands of jobs.

What effect will it have on earnings?

The company will start talks with unions over the 3,500 jobs that could be at risk.