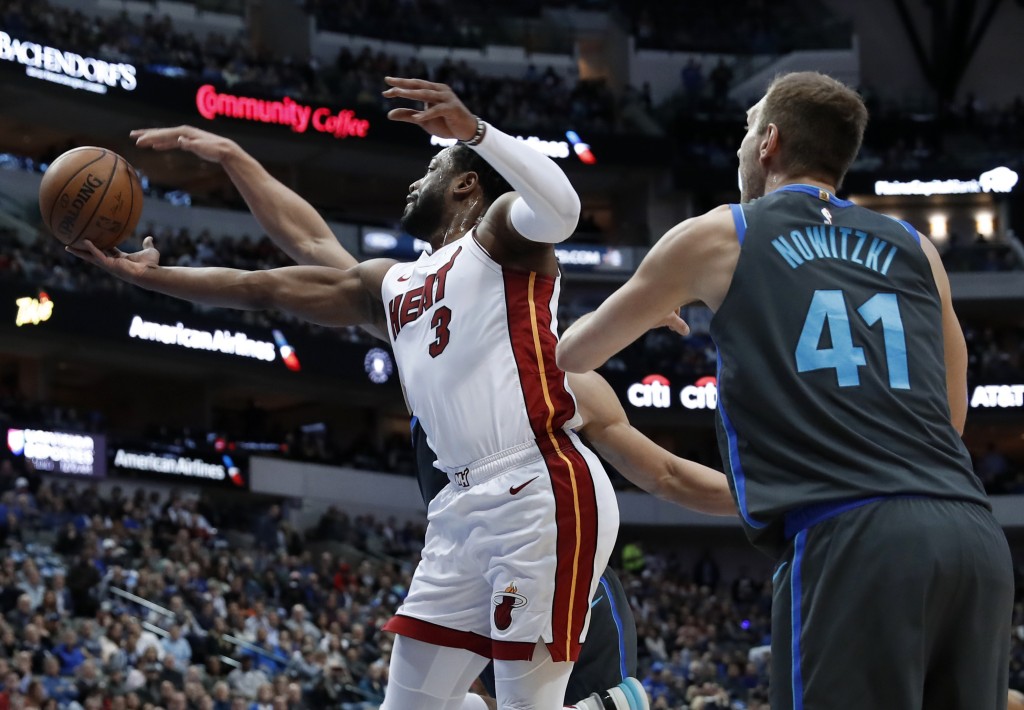 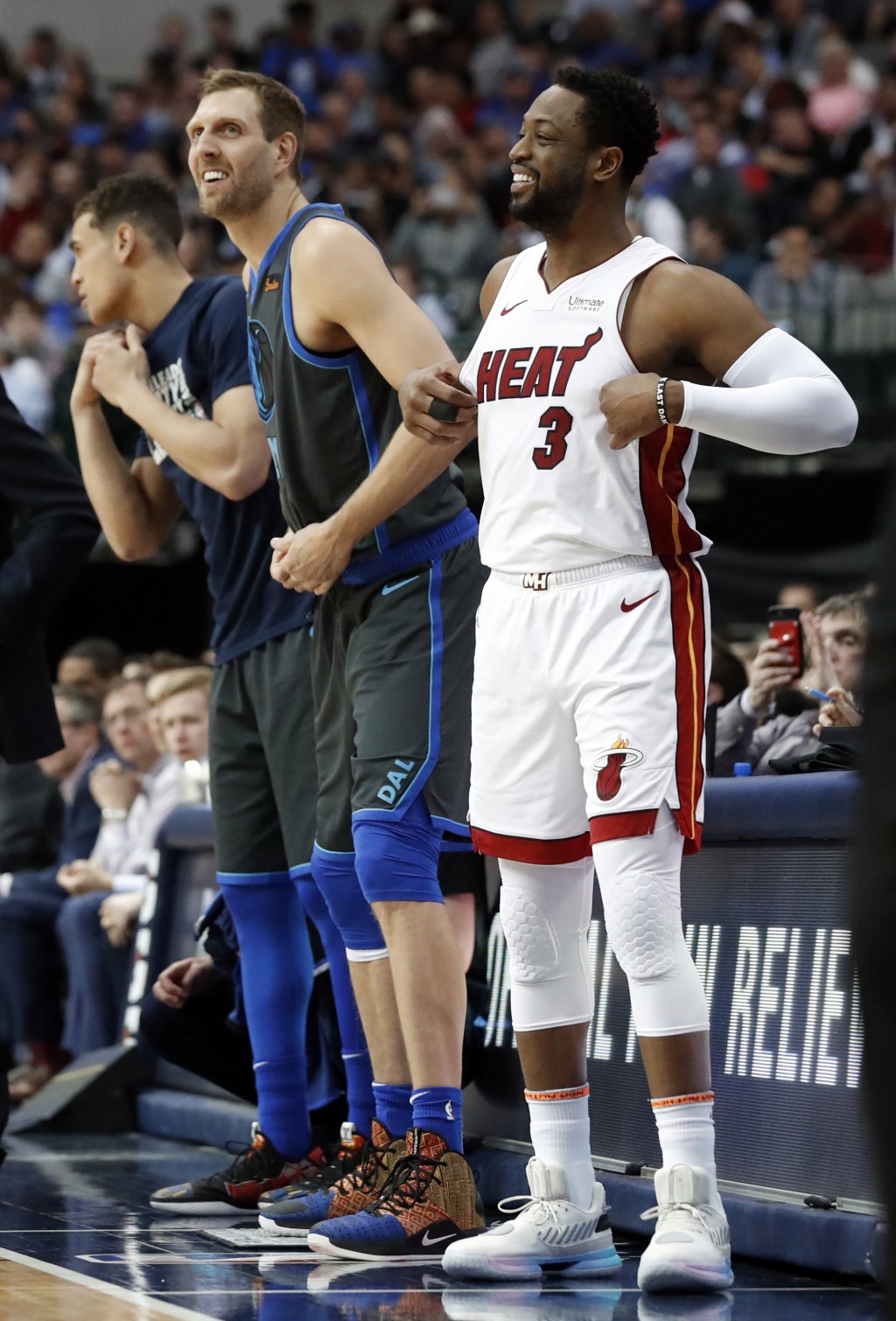 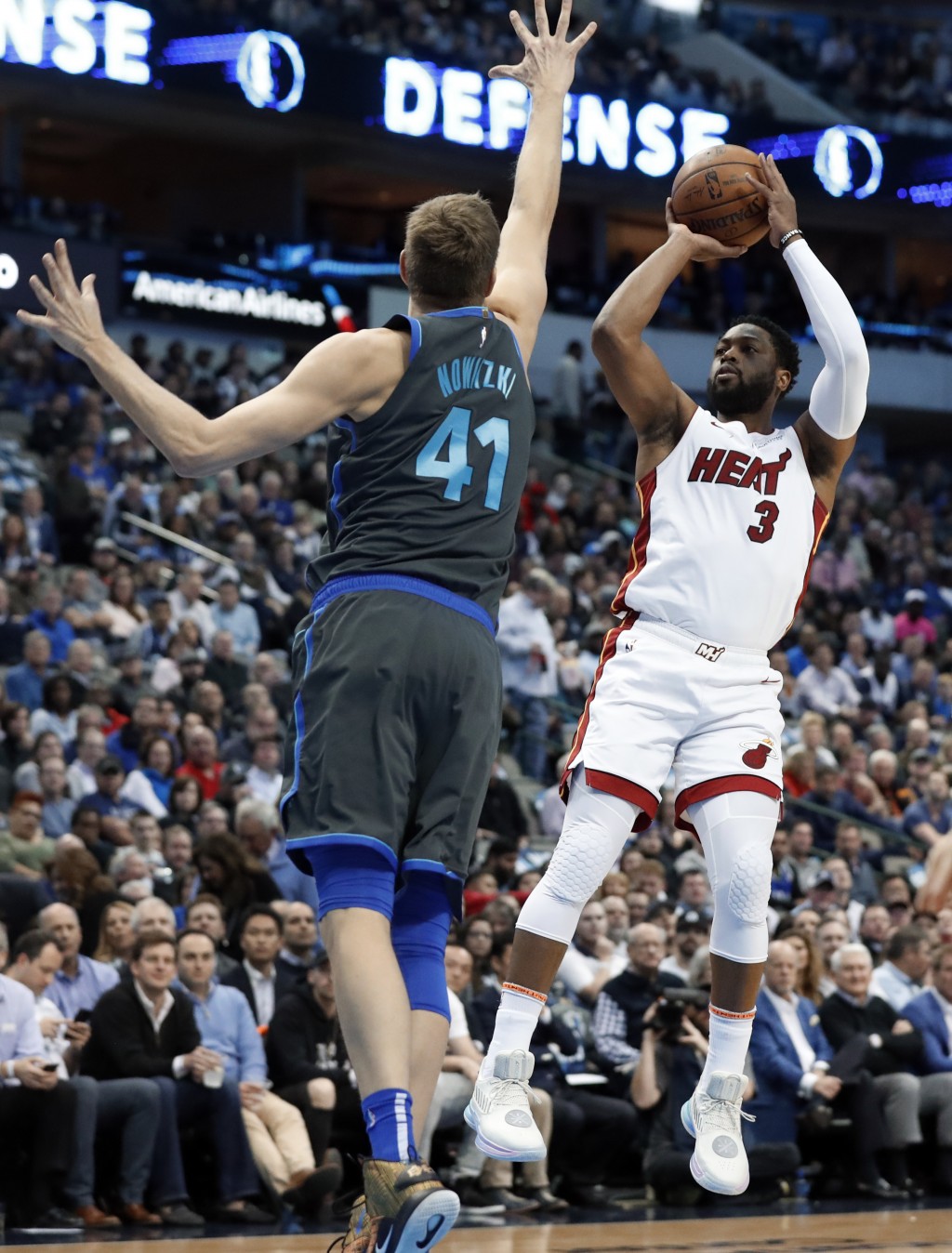 DALLAS (AP) — Dwyane Wade scored 22 points in what figures to be his final game on the court where he won his first championship, helping the Miami Heat beat the Dallas Mavericks 112-101 Wednesday night.

The 37-year-old who has already said this is his final season was a little better despite one of the stronger games of the season for Dirk Nowitzki, his two-time NBA Finals foe whose record 21st season with the same franchise has the feel of an unofficial farewell tour.

The 40-year-old German finished two points shy of his season high with 12, although most of the highlights in their first meeting of the season came in the first half before the Heat outscored the Mavericks 32-16 in the third quarter and led by as many as 21 points in the fourth.

Nowitzki and Wade, both added to this weekend's All-Star game to recognize their decorated careers, entered the final game before the break together midway through the first quarter, which eased the boos on a Wade farewell tour that has been well-received everywhere else.

There were some boos as they took the court, but those were quickly drowned out when many in the crowd stood and cheered. That's been the consistent reaction from fans whenever Nowitzki enters games — home and road.

The true reaction of Dallas fans to Wade came later when they booed the 37-year-old whenever he touched the ball. The Mavericks have always thought Wade was the beneficiary of questionable calls in the 2006 NBA Finals, which the Heat clinched with a Game 6 win in Dallas.

Fans probably still remember the video of Wade and LeBron James faking coughs while leaving the Mavericks' arena after losing Game 5 of the 2011 Finals when Nowitzki, who was sick before the game, hit the winning shot. Dallas took Game 6 in Miami to win the series.

For those who forgot, there were plenty of Twitter posts before the game noting the irony of Wade missing Miami's shootaround because of an illness in what should be his final Dallas appearance.

Wade, who went on to win two more titles with James, was healthy enough to play, and had some vintage moments in the first half. He hit a 3 over Nowitzki before the 40-year-old answered him with his familiar one-legged fadeaway over Wade at the other end.

Some of the loudest boos for Wade came with him dribbling out the final seconds of the first half isolated on Dallas rookie Jalen Brunson. Wade swished a jumper over the two-time NCAA champion from Villanova to finish the half with a team-high 14 points.

The Heat took control without Wade in the third quarter, with Josh Richardson scoring six of the first eight points on a 12-0 run that extended a one-point lead and put Miami ahead by double digits for good.

Richardson scored 14 points, and Dion Waiters had 20. Justise Winslow had 11 points and 11 rebounds.

Heat: Finished with seven players in double figures. The others were James Johnson with 12 points and Kelly Olynyk and Bam Adebayo with 10 apiece. ... Richardson and Winslow had six assists each.

Mavericks: C Salah Mejri returned after missing three games and made his second start of the season. The 7-foot-2 Tunisian was re-signed after getting waived as part of the trade that sent Harrison Barnes to Sacramento. Brunson started the second half instead of Mejri, who had two points and one rebound in eight minutes.

Both teams are headed into All-Star break. The Heat return to finish the second of two season-long six-game road trips at Philadelphia on Feb. 21. The Mavericks are home against Denver on Feb. 22.