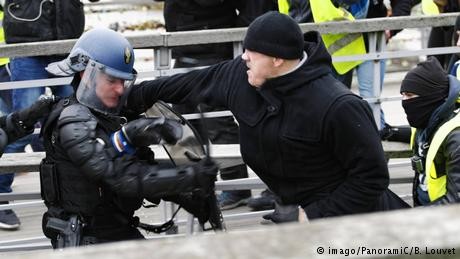 A former boxer who punched a police officer during a "yellow vest" protest in Paris has been sentenced to one year in prison.

The presiding judge, who sentenced Christophe Dettinger to 30 months in prison with 18 months suspended, said he could work during the day but would need to spend nights in prison for the remainder of his sentence.

Two video recordings went viral in January that showed the 37-year-old punching a police officer on a bridge and kicking another who had fallen to the ground.

'I wanted to stop an injustice'

Dettinger, a former light-heavyweight champion, said he was reacting to police officers who had hit protesters while they were on the ground.

"I wanted to stop an injustice but I ended up creating another," Dettinger told the court.

The government and French police slammed a reported crowdfunding campaign to raise more than €100,000 for Dettinger's legal defense. A rival fund raised more than a million euros for the injured police officers.

Since November, the yellow vest movement has been staging anti-government protests, many of which have turned violent, throughout France.

The leaderless movement started in opposition to a fuel tax hike, but has since focused its criticisms against President Emmanuel Macron's economic reforms and what they say is his elitist leadership style.

Macron has tried to mollify the protesters with tax cuts and an increase in the minimum wage.

Nearly 1,800 people have been convicted and just over 1,400 people are awaiting trial for their involvement in violent clashes with police, Prime Minister Edouard Philippe has said.

A poll by Elabe on Wednesday showed for the first time more respondents in favor of an end to the protests, with 56 percent saying they wanted the rallies to stop.

Some 58 percent however said they sympathized with the movement itself.

Read more: Emmanuel Macron and the 'yellow vests': Can they cooperate?