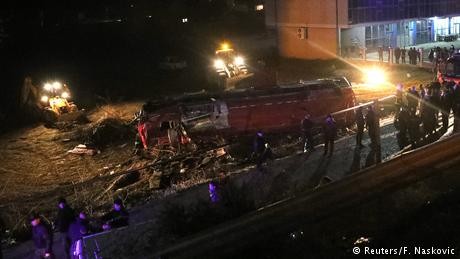 At least 13 people were killed and more than 30 injured when a bus crashed into a ravine in North Macedonia on Wednesday, Health Minister Venko Filipce said.

Rescuers pronounced seven people dead at the scene and the rest died after they were transported to a hospital. At least four people have life-threatening injuries.

The bus overturned after plunging 10 meters (30 feet) down the ravine near a highway between the capital Skopje and the town of Tetovo.

Investigators are questioning the bus driver about what caused the crash, a spokesman for the interior ministry said.

The vehicle was carrying some 50 workers from Skopje to the town of Gostivar where all of them lived, Mayor Arben Taravari said.

"There are no words that can console for the severe traffic accident that was fatal for many of our fellow citizens," Prime Minister Zoran Zaev said, adding that the country would observe two days of mourning.