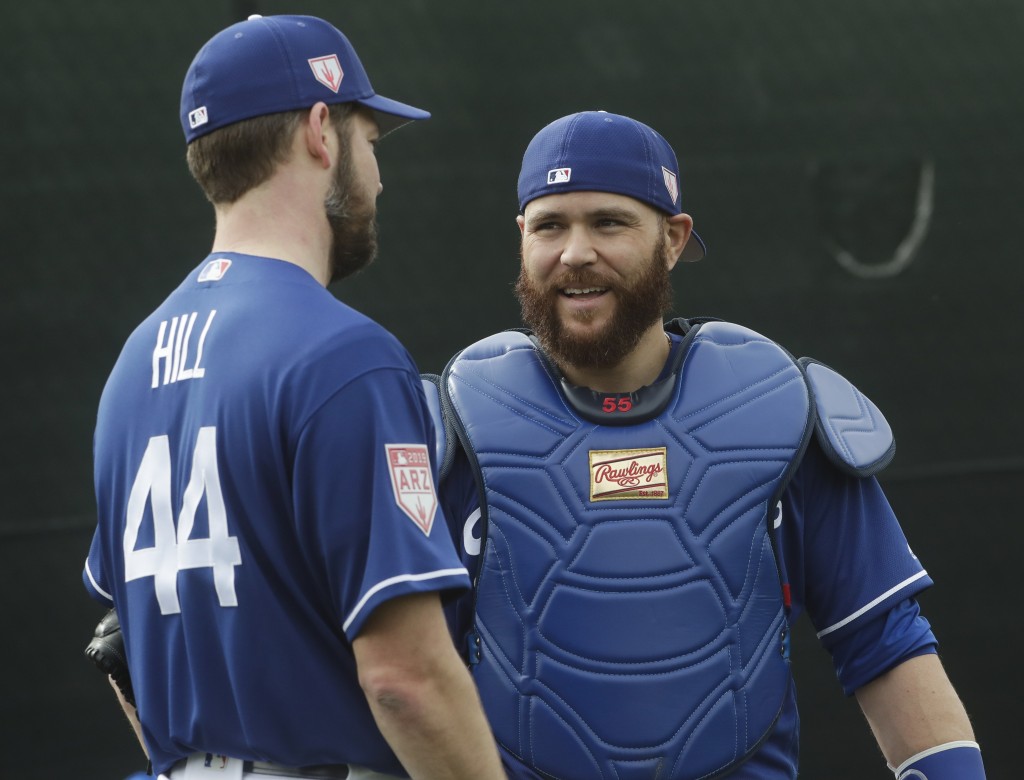 GLENDALE, Ariz. (AP) — Before the Los Angeles Dodgers pulled the trigger on their January trade to bring back catcher Russell Martin, they watched enough video to convince themselves he would bounce back from career lows in batting average and slugging percentage.

On the first official day of pitcher and catcher workouts Wednesday, they couldn't be more pleased with the four-time All-Star.

"Bringing Martin back, just him getting up to speed with our guys, the early returns have been unbelievable," said Andrew Friedman, Dodgers president of baseball operations. "Not surprising just how much he's already invested into our guys, the questions he's asking. All he wants to do is win and you can see it in everything he does."

As a replacement for Yasmani Grandal, who signed as a free agent with Milwaukee, Martin is connecting with returning catcher Austin Barnes and eliminating concerns about the possibility of splitting time.

"As far as Barnes, he looks like he's a tremendous athlete, a good catcher, a good teammate," Martin said. "Good teammates have one goal in common, they want the team to win and I think we share that so I am not going to be (complaining) at all about playing time. As long as we win games, and we put ourselves in position to hopefully win a championship, that's all we can do."

With Toronto out of the playoffs last season and committed to developing younger players, Martin did not play the last month and was limited to 289 at-bats, a far cry from his more than 500 at-bats in 2013, 2015 and 2016.

"I was horrible last year," Martin said. "Still a tough out, still could work a count, still hit the ball relatively hard, but it was a down year. I wasn't as good as I can be. When you get older, they give an excuse for you, 'Well, you're getting old.' But my body felt great. I got zero excuses."

From their analysis of Martin's 2018 performance, they recommend change.

"They told me, 'We can clean up your lower half. We feel we can synchronize it to where it is working together,'" Martin said.

"No. 1, Russell gives you a professional at-bat, the quality of contact is there," he said. "I am sure he understands there was an angle issue there, a negative angle consistently."

The goal is for the ball to jump off his bat via an effortless swing.

"An effortless swing is a swing you can control, and when you are in control, you typically have better at-bats," Martin said. "I've always been good at pitch recognition; I always draw walks . last season I was not in position (mechanically) to hit the ball."

Defensively, he is studying an analytics package provided by Friedman, which shows key aspects of each Dodgers pitcher. Plus, he is picking Barnes' brain.

"One thing you can't teach is experience, so what he brings into this clubhouse of over a decade of playing in the major leagues is going to help immensely," Hill said.

Clayton Kershaw is the only Dodgers pitcher to have ever worked with Martin. They reunited on Tuesday for a bullpen session.

"I thought their discussion during the pen session was great," Roberts said. "I know Russell is very excited to catch him."

NOTES: Roberts said life without Puig "is going to be different." ''It is going to be a quieter camp, whether that is good or bad." ... Closer Kenley Jansen threw his first bullpen Wednesday and was pleased with his spin rate, which dipped last season as he struggled to overcome a hamstring injury and dealt with atrial fibrillation. An August episode in Denver led to an ablation procedure on Nov. 26. "He looks great," said Friedman. . Mark Prior will be the primary pitching coach in the absence of Rick Honeycutt, who underwent surgery Tuesday and is expected to be away for a few weeks while recovering.