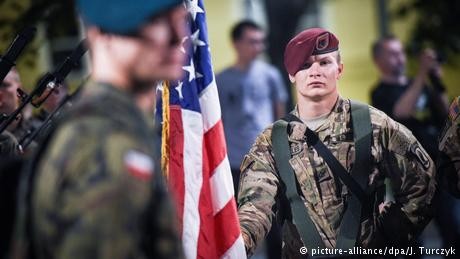 The US Defense Department on Wednesday denied that an agreement had been made with the Polish government to bolster troop numbers in the central European country.

Poland has pushed Washington to create a permanent US base in the country and increase its deployment of 4,000 soldiers, which form part of a NATO operation aimed at Russian deterrence. Polish authorities raised the prospect of calling the base "Fort Trump."

US ambassador to Poland Georgette Mosbacher earlier Wednesday claimed that a deal had been made, reportedly telling the London-based newspaper The Financial Times: "It will be significant. It passes the hundred mark, the hundreds mark."

But Pentagon spokesman Eric Pahon later said "any speculation on troop increases or agreements at this point is unfounded."

"No agreements have been reached," Pahon said. "We are continuing discussions and will announce results of our talks at the appropriate time."

Read more: Fort Trump: Is a new US military base in Poland a realistic option?

'We want US troops'

Senior US officials are expected to discuss the potential troop increase during an official visit to Warsaw for a security conference on Iran and the Middle East, co-hosted by Poland and the US.

US Vice President Mike Pence is in town with Secretary of State Mike Pompeo, and both are expected to give major speeches on Thursday alongside Israeli Prime Minister Benjamin Netanyahu. But some have questioned Poland's involvement in the Middle East-oriented conference.

"The main goal for us is not the Middle East. It's not Iran. Polish-Iranian relations are quite marginal," Robert Czulda, Iran expert and professor of politics at Poland's University of Lodz, told DW. "For us, the main reason is to please the US. We want US troops to be deployed in Poland."

Pence is also scheduled to visit the site of Nazi Germany's Auschwitz death camp in occupied Poland. Afterwards, he will be heading to the Munich Security Conference, where world leaders — including German Chancellor Angela Merkel — will discuss the biggest threats to global security.