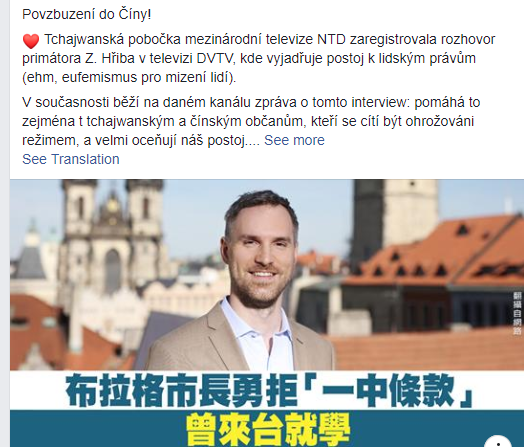 TAIPEI (Taiwan News) - The new mayor of the Czech capital Prague, Zdeněk Hřib, wants to scrap a “One China” article from a sister city agreement with Beijing while professing interest in how Taiwanese would pronounce his name, the Liberty Times reported Wednesday.

Hřib, 37, a physician who was elected mayor last year as a candidate for the Pirate Party, spent a month in 2005 as an intern at the Chang Gung Memorial Hospital in Linkou, New Taipei City, reports said.

Next month, the mayor of the picturesque Central European capital is scheduled to visit Taipei to take part in a “smart city” forum and seminar, according to the Liberty Times.

Refusing China’s “panda diplomacy” amounts to showing Taiwan a high degree of respect, he said, adding that human rights came first. On his Facebook page, he also wondered how Taiwanese would pronounce his surname, the Liberty Times reported.