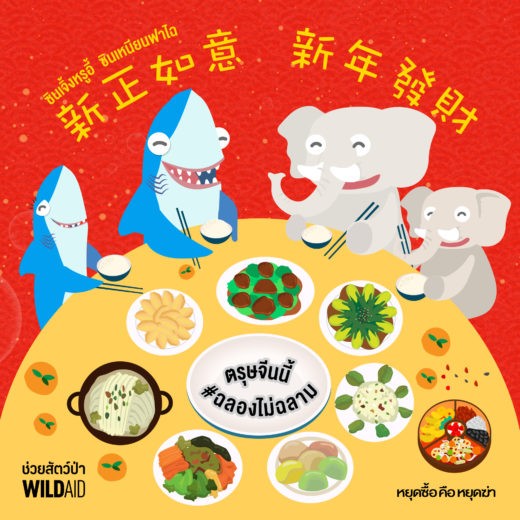 THAILAND (WildAid) - Building on the momentum of the “Celebrate with #NoSharkFin” (#ฉลองไม่ฉลาม) campaign, WildAid released a video message featuring a Thai-Chinese cultural expert and a traditional medicine practitioner urging the public not to consume shark fin during Lunar New Year celebrations. While not a national holiday, the Lunar New Year is widely celebrated in Thailand and is a peak time for shark fin consumption in a country that plays a significant role in the global shark fin trade.

“Shark fin is not mentioned in Chinese literature as auspicious (มงคล) even once,” said Master Viroj Tangvarnich, an expert on Chinese culture. “It is only served due to the belief that it’s a luxurious dish and gives status to the hosts. But, these beliefs do not match today’s world and they are causing a huge loss to our environment, and they need to be ended.”

According to WildAid’s 2017 Shark Fin Demand in Thailand survey, more than half of urban Thais have eaten shark fin, while alarmingly 61% of all respondents plan to consume it again in the future. Survey respondents said they consumed shark fin most often at social events such as weddings (72%), family gatherings at restaurants (61%) and business events (47%).

The “Celebrate with No Shark Fin” (ฉลองไม่ฉลาม)” campaign aims to end shark fin consumption in Thailand and thereby protect sharks, fisheries and the ocean ecosystem. It is an initiative endorsed by Thailand’s government organization, Department of Marine and Coastal Resources.

“Current textbooks for the study of Chinese Traditional Medicine and Chinese herbs do not recognize shark fin as either medicine or herb with health benefits,” said Thamatat Chiaopromkun, Lecturer, Faculty of Chinese Medicine, Huachiew Chalermprakiet University. “During the reign of the Ming Dynasty, shark fin was one of eight luxury food items consumed within the place, but there was no mention of using shark fin as medicine or for health benefits. The belief that shark fin serves as nourishment is something that us humans have made up with our own assumptions.”