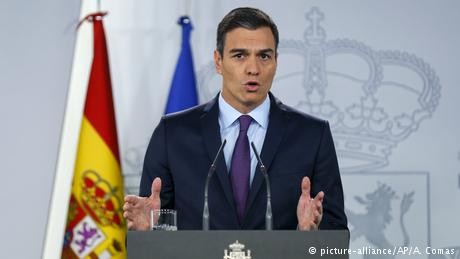 Spain's Prime Minister Pedro Sanchez, the leader of the country's minority Socialist government is set to announce on Wednesday whether or not he will call for an early general election.

The decision follows tough negotiations for a new budget, which will be up for a vote in the Spanish parliament on Wednesday.

In a tweet, Sanchez had said he expected both right-wing and pro-independence lawmakers to vote against his budget. "They both want the same: A divided Catalonia and a divided Spain," he said.

Sanchez's government has so far refused to negotiate Catalan self-determination and as a result, the region's two small pro-independence parties have rejected his budget legislation.

Addressing the impasse with Catalan parties, Budget Minister Maria Jesus Montero told parliament that the Spanish government would "not give in to blackmail" over the budget.

But the Catalonian politicians dismissed the claim. "If there is no budget, it won't be the Catalan pro-independence parties' fault, it will be because you think you will benefit from an early election," said Ferran Bel, from the Catalan PDeCat party, addressing the government.

A potential early election could likely take place on April 14 or 28, government sources said. Sanchez is said to be keen no holding an election as soon as possible, in order to mobilize left-leaning voters against the threat of the right returning to power.

Currently, Sanchez's Socialists lead opinion polls, with roughly 30 percent of voters saying they would back the party. But the two main right-of-center parties Partido Popular (Popular Party) and Ciudadanos (Citizens) together have polled at more than 30 percent.

The start of the trial of 12 Catalan separatist leaders on Tuesday in Madrid clashed with the budget negotiations and renewed tensions between the Spanish government and the autonomous region's leadership.

Madrid accused the Catalan leaders of rebellion for their efforts in support of an independence referendum on October 1, 2017, which sparked one of Spain's deepest political crisis since the country's transition to democracy in the 1970s.

Catalonia's regional government head Quim Torra traveled to Madrid for the opening of the trial and labeled it "an attack on democracy and human rights." Torra told reporters that self-determination through a referendum had to be part of any dialogue with Madrid.

Carles Puigdemont, Catalonia's former president, who fled Spain days after the independence declaration on October 27, will not be among the defendants at the trial, as Spain does not try suspects in absentia.

Puigdemont said in Berlin that the trial represented "a stress test for Spanish democracy."