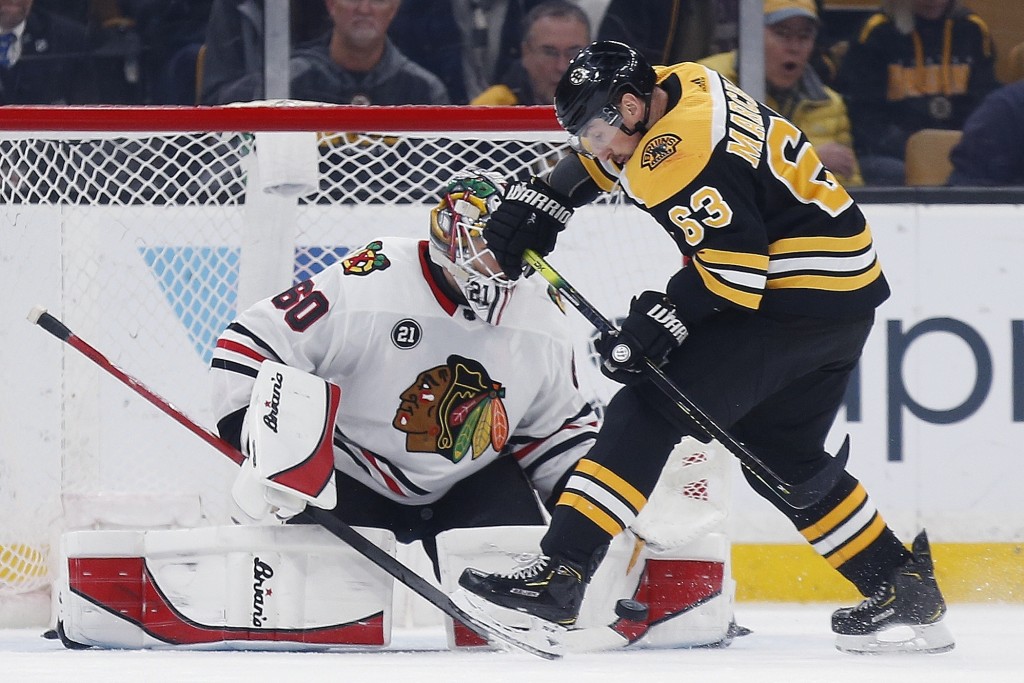 BOSTON (AP) — David Krejci, Danton Heinen and Brad Marchand each scored during a four-minute span at the end of the first period and the Boston Bruins beat the Blackhawks 6-3 on Tuesday night to snap Chicago's seven-game winning streak.

Krejci scored again in the third period, when Marchand picked up his third assist, to help the Bruins win for the fifth time in six games. Jake DeBrusk and Heinen each had a goal and two assists, and Tuukka Rask stopped 23 shots for Boston. Peter Cehlarik also scored for Boston, and Patrice Bergeron had a pair of assists.

Collin Delia made 31 saves, and Alex DeBrincat and Duncan Keith scored for Chicago, which hadn't lost since Jan. 17. Patrick Kane had an assist for the 14th straight game, tying Stan Mikita for the longest assist streak in the history of the Original Six franchise.

The Bruins have not lost in regulation in eight games.

SUNRISE, Fla. (AP) — Anton Khudobin recorded his second shutout of the season and Tyler Seguin had two goals and an assist as Dallas topped Florida.

Esa Lindell also scored, and Alexander Radulov had two assists for Dallas, which snapped a two-game losing streak and won for the sixth time in eight games.

With Stars goalie Ben Bishop out, Khudobin made his third consecutive start, stopping 30 shots and winning for just the second time in six starts. It was the eighth shutout of Khudobin's career.

Roberto Luongo recorded 16 saves for Florida, which lost its second straight, both at home at the start of a seven-game homestand. The Panthers were shut out for the first time this season — the last team in the NHL to be blanked.

Jason Pominville scored the go-ahead goal 6:49 into the second period. Jeff Skinner scored off a faceoff draw won by Eichel, and Johan Larsson sealed the victory with 2:25 left. Linus Ullmark stopped 24 shots to improve to 3-0-1 in his past four starts.

The Sabres improved to 3-2-1 six games into a seven-game homestand. Overall, Buffalo improved to 28-21-7 and picked up its 63rd point, one more than last season.

Casey Cizikas scored for the Islanders, who had a three-game winning streak snapped and lost in regulation for just the second time in 13 games (9-2-2). Robin Lehner stopped 19 shots in dropping to 13-3-1 in his past 17 starts.

COLUMBUS, Ohio (AP) — Sergei Bobrovsky made 13 of his 20 saves in the third period to lift Columbus over Washington.

Anthony Duclair, Nick Foligno and Artemi Panarin scored for the Blue Jackets, who won their fourth straight and remained in third place in the Metropolitan Division, two points behind Washington.

Braden Holtby had 29 saves and held off the Blue Jackets on four power plays with a few close calls.