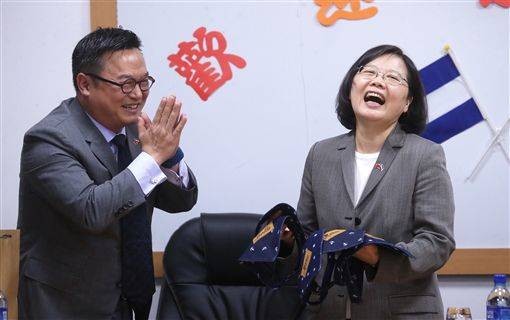 They are about the preservation of Taiwan’s hard-earned freedoms and democracy, facing down the hostile threats of a neighboring authoritarian regime, and defending Taiwan’s sovereign rights.

Sometimes it is hard to keep a straight face, however, as the Chinese Communist Party’s approach to cross-straits relations is often so utterly laughable that it can be hard to keep things in perspective and remember just how serious these issues are.

So, maybe it’s time for Taiwan to take things a little less seriously. Maybe it’s time to laugh off China’s ridiculous approach to cross-straits relations and counter their provocation with humor and ridicule, rather than stony-faced diplomacy.

For a long time, Taiwan has responded to Chinese provocation with measured diplomatic responses.This approach has earned Taiwan a degree of respect from the international community, but the fact of the matter is that the situation between the two countries hasn’t changed.

Communist China doesn’t recognize Taiwan’s sovereignty and right to self-determination, and has no interest in the Taiwanese government’s view on anything. Measured diplomacy is not going to change this, and it apparently does not make much difference to the international community’s response to the matter either.

So, what has Taiwan got to lose by trying a change of tack? The answer is not very much, but it is possible that a shift in Taiwan’s diplomatic responses could work out in its favor.

This is, after all, the digital age; a time when social media is king and memes have more power than press releases.

If Taiwan wants to raise international awareness of China’s ludicrous actions and statements, it needs to get cross-strait stories trending. It needs to do something to draw greater global public attention rather than play the joyless diplomat time and again.

A recent example of how effective this can be is the incident with the Chinese tourists in Sweden who made a frenzied outburst when they were refused entry to a hotel—despite not having a booking and the hotel being full.

The Swedish government was mildly dismissive of the incident, rather than offering the fawning apology the Chinese Communist Party wanted. A Swedish satirical TV show took the incident, and the official Chinese response, and tore them apart with a comedic take interjected with a heavy dose of reality.

Did China react well to this approach? No. Did it increase awareness of the situation? Without a doubt. The clip of the show made waves on social media around the world.

What was the end result? China came out of the situation looking like a spoiled and petulant child, while Sweden looked like the mature, patient, good-humored parent.

Taiwanese networks, sadly, do not broadcast similar programs that could cast light on China’s ludicrousness. They should do, but that is another issue.

In the meantime, there is no reason why Taiwanese authorities cannot show similar good humor to highlight the CCPs ridiculousness. A couple of recent opportunities for such an approach leap to mind.

First, there was the statement from China's Taiwan Affairs Office spokesman Ma Xiaoguang at the end of January which attacked Taiwan for “unreasonable restrictions” on voting rights for Chinese spouses of Taiwanese citizens.

Coming from what is the most anti-democratic and authoritarian regime in the world, this statement is truly jaw-dropping in its lack of self-awareness. It is like Donald Trump jibing someone for using Twitter too much, or Han Kuo-yu (韓國瑜) criticizing someone for lying. It is also ripe for a witty response.

"If Taiwanese people can’t vote in elections, perhaps they can protest against government policies they disagree with? No? Well, how about writing media articles or blog posts stating their true political opinions? No, not that either? Well I guess they’ll have to resort to social media instead. Still no? Oh dear. Maybe they’d be better off just staying in Taiwan then, eh?”

Such responses would trend across social media throughout the world. They would be reported in international press.

The result of the coverage would then help raise awareness to a wider audience about the lack of democracy in China, and the threat the Chinese government poses to democracy in Taiwan.

Such responses would also expose the Chinese regime to global ridicule and, no doubt, infuriate Beijing to no end. But as exemplified by the Swedish hotel incident noted above, it wouldn’t know how to counter it.

Happy New year to you too

Another example could have followed the Lunar New Year’s video message to Taiwan released by the Chinese Air Force.

The video included prominent Taiwanese landmarks and featured Chinese jets flying around the island, making a less-than-implicit threat of invasion.

MAC's response was to condemn the Chinese saber-rattling and provocation of cross-straits warfare.

To her credit, President Tsai did use humor in her response, saying that she "realized Taiwan’s commitment to democracy wasn’t understood everywhere." This comment went down well both at home and overseas. But why not go further?

Why not respond with a similar humorous video showing gangsters wishing their victims a happy new year, burglars sending New Year’s greetings to the people whose house they just ransacked, and a boss wishing an employee Happy New Year shortly after firing him.

Alternatively, she could have directed it straight back at the Chinese Communist Party with a video showing a political protest against a government that isn’t suppressed by the military; or perhaps a democratic election; or people enjoying their right to freedom of expression; or people using Facebook and Google; or Muslims practicing their religion without being thrown in internment camps, before wishing China a "Happy New Year" in return?

Such an approach would, again, attract international coverage, expose China’s military threats towards Taiwan to a wider audience, and raise awareness of the Communist regime's various other failings.

International awareness of the brutal destabilizing effects of the Chinese Communist regime is growing—and not a moment too soon. But while Taiwan sits on the frontline, it is not by any means the primary focus of international attention that it should be.

By adopting a comedic approach to dealing with Taiwan and showing a willingness to satirize a regime that is ripe for parody, Taiwan might just be able to change this and succeed in increasing global awareness of China’s hostility.

Plus, by helping cultivate further international awareness of Communist China’s vices, it might also help to edge the wider world into outright condemnation of the brutal Communist regime.