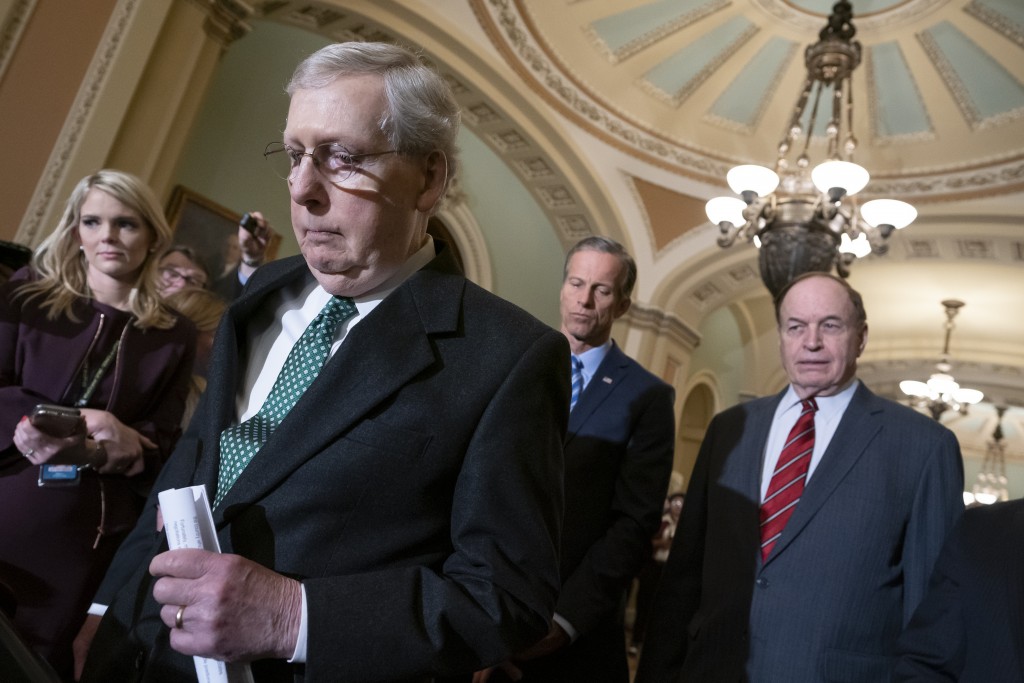 WASHINGTON (AP) — The undisputed grand prize at stake for President Donald Trump in the border security talks was money for his proposed wall with Mexico. He flat out got much less than he demanded.

But to clinch the deal that congressional leaders hope to approve this week — and that they're prodding Trump to sign or risk a new government shutdown — Democrats gave ground, too. Especially in their bid to fetter the federal Immigration and Customs Enforcement agency's ability to detain unauthorized immigrants.

It's the kind of accord that, for now, has elicited few bellows of triumph by either side. Senate Majority Leader Mitch McConnell, R-Ky., on Tuesday called it "a pretty good deal" that Trump should sign. Rep. Nita Lowey, D-N.Y., the lead House negotiator, said, "When you have a bipartisan process, you split the win."

A look at the deal's key provisions:

BUILD THE WALL? NOT SO MUCH

Democrats went head-to-head with Trump over his campaign mantra, which riles each party's core voters to near frenzies. Score this one for Democrats.

Trump shut the government down for a record 35 days, starting before Christmas, when Democrats refused to give him $5.7 billion to build more than 200 miles of boundary wall. He even thumbed his nose at a bipartisan Senate bill last year that would have provided $1.6 billion for border barriers.

He ended up with just under $1.4 billion — plus a shutdown that hurt millions of people and inflicted political damage on the GOP.

That's enough money for 55 miles of new construction. But the deal would limit the design to techniques already in use by existing border barriers, like vertical steel slats. Democrats say the language precludes a solid, unbroken "wall."

Democrats won a prohibition against barriers in and near a butterfly center in Texas, but not in all the stretches along the border they sought to protect, said a Democratic aide who described still-evolving details on condition of anonymity.

Republicans note that early in the shutdown, Nancy Pelosi — now House speaker — said Democrats would provide nothing for the "immoral" wall. Though Democrats clearly had leverage in the talks, no one thought they'd get by without providing some money for barriers.

Still, Trump is looking for other money in the federal budget to shift to wall building. Depending on what he does, stay tuned for clamorous votes in Congress and lawsuits.

For many Democrats, Customs and Immigration Enforcement, or ICE, symbolizes what they consider Trump's punitive policies and enforcement of immigration laws. Some of their most liberal and visible partisans, like New York Rep. Alexandria Ocasio-Cortez, want to abolish it.

As a tradeoff for money for barriers and to soothe their progressive wing, Democrats demanded curbs on ICE's ability to detain immigrants. They got less than they wanted.

They completely abandoned their push to limit ICE to holding a daily average of 16,500 undocumented immigrants caught inside the U.S. They said that cap would have forced ICE to go after immigrants with criminal records, not those with minor immigration violations.

In addition, bargainers agreed to give ICE enough money to house 40,520 detainees by Sept. 30, the end of the fiscal year. The agency currently holds around 49,000. So while the deal would put that figure on a downward arc, it provides enough money for a daily average this year exceeding 45,000 detainees.

That's thousands above last year's level. And ICE has access to other budget funds to potentially hold more than 50,000 detainees.

That's not good, "given that ICE is an agency that needs to be reined in," said Kerri Talbot, a top official at The Immigration Hub, which favors easing immigration restrictions. A GOP summary of the accord said ICE was given "more than enough flexibility" for future "surges" in illegal immigration.

As final pieces of the deal fall into place, Democrats say they expect hundreds of millions of dollars to upgrade often shabby immigrant holding facilities. They say there will be additional money for alternatives to detention, like ankle bracelets and officials who monitor immigrants released until court hearings.

This would be a relatively modest win for Democrats.

Probably, and that would be a huge relief for the GOP. Polls showed the public blamed Trump and congressional Republicans more than Democrats for the shutdown that ended Jan. 25, and GOP distaste for another one is palpable.

Even so, it's hard to be certain with Trump. Asked how certain he was that there'd be no renewed shutdown this weekend, McConnell told a reporter, "I sure hope not."

A TEST FOR CONGRESSIONAL LEADERS

McConnell and Pelosi will have a lot on the line this week.

For Pelosi, D-Calif., who reclaimed the speaker's gavel last month, steering the deal through the House will test her ability to command what could be an unwieldy 235 Democrats. Some of the most liberal may rebel against the bill's money for barriers and less than stringent controls on ICE. She'll need to minimize Democratic defections and will likely need GOP support for the 218 votes necessary for passage.

McConnell should have a less difficult time in the more pragmatic Senate. His toughest task may be persuading Trump to not abruptly turn against the legislation — a habit Trump has displayed before.