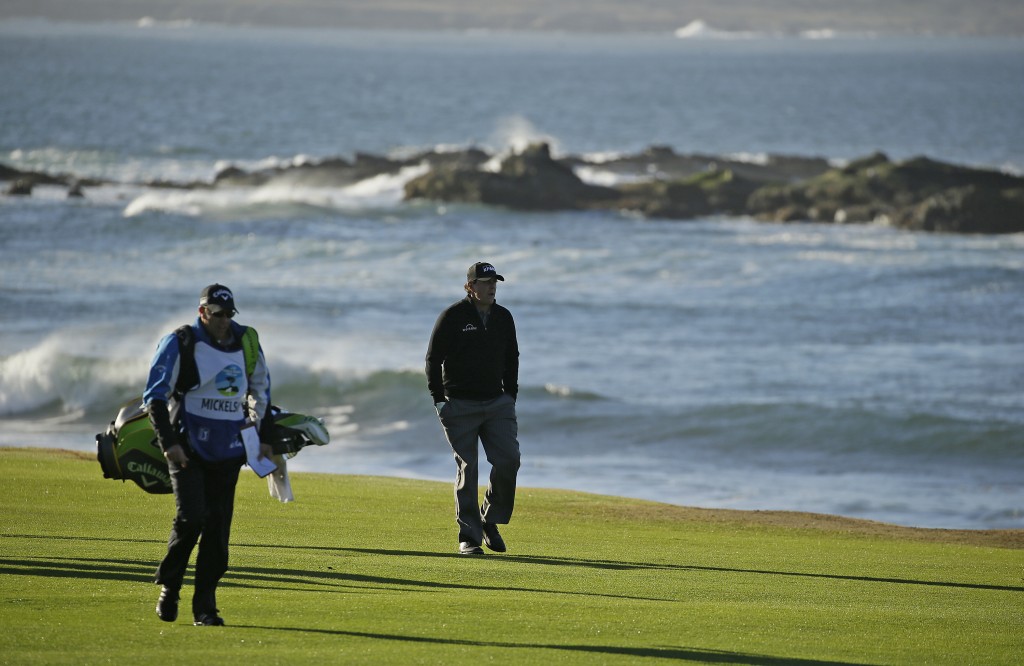 LOS ANGELES (AP) — Golf Channel is interested in live programming from Monday to Wednesday, and the answer might be found in college tournaments. It is adding another prestigious event this year, and more could be on the way.

Golf Channel already has the East Lake Cup in the fall, along with the NCAA men's and women's championships in May, which has made for compelling television with eight finalists competing in team match play.

The Western Intercollegiate is next.

The 54-hole stroke play event is entering its 73rd year and is held at storied Pasatiempo, an Alister MacKenzie design in Santa Cruz, California. It will be televised live from April 15-17, the Monday through Wednesday right after the Masters.

Getting televised live will only add to the prestige of what already is one of the premiere college events in the spring.

The trick is figuring out what else would fit. It helps to have courses with heritage, such as East Lake and Pasatiempo, and Knapp said there needs to be a balance between fall and spring. Golf Channel already has elevated interest in college golf through the NCAAs, and more live events could be a plus.

Knapp said he hoped to have a full college slate of events over the next four years, conceding that not every tournament (or course) works for TV. Even so, it can be hard for the average fan to keep track of a college season, such as who is playing where.

"We're trying to help with that to a degree that we can come up with a televised series that makes sense," he said.

What would a Presidents Cup be without Fred Couples involved? Go back to 2007 to find the last time Couples was not part of the matches.

U.S. captain Tiger Woods appointed the 59-year-old Couples to be an assistant at Royal Melbourne in December. Couples remains one of the most popular figures in golf with players and fans. He was Presidents Cup captain in 2009, 2011 and 2013, and an assistant the last two times.

Woods also selected Steve Stricker and Zach Johnson, and he plans to announce one more before the Presidents Cup on Dec. 12-15.

Stricker was Presidents Cup captain in 2017 and is expected to be appointed Ryder Cup captain for next year.

"Freddie and I go way back in the Presidents Cup," Woods said. "And we're basically coming full circle at Royal Melbourne. He and I teamed up in one our matches in '98, I was a captain's pick in '11 and now we get to return as two leaders of this team. We're going to have some fun, but we're there to win."

Phil Mickelson, Tiger Woods and Billy Casper — all native Californians — now share an obscure record for most PGA Tour victories in California at 14.

But there are differences.

Mickelson won multiple times on all the West Coast venues, except for the Safeway Open at Silverado, which has been around for only five years. Along with his five titles at the AT&T Pebble Beach Pro-Am, Lefty has won three times at Torrey Pines and twice each at the old Bob Hope Classic, Riviera and the winners-only Mercedes Championship when it was at La Costa.

Casper was the real king of California. He won the U.S. Open at Olympic Club in 1966. He won twice at Pebble and the Hope, and twice in the Los Angeles area on different courses, neither of them Riviera. He also won seven other PGA Tour events, some of which no longer exist, such as the Bakersfield Open and Hesperia Open.

In all, Casper won his 14 titles in California on 12 courses. That doesn't include the three-course rotation at the Hope.

The Mexican caddie for Matt Kuchar when he won the Mayakoba Classic told golf.com he was paid $5,000 the night after the victory, and that Kuchar later offered an additional $15,000 that the caddie turned down because he found it unacceptable.

"No thank you. They can keep their money," David Girl Ortiz told the website.

Kuchar used Ortiz for Mayakoba when his regular caddie couldn't make it. Kuchar earned $1,296,000 for the victory.

Michael Bamberger at golf.com spoke to Ortiz through a translator. The caddie says the original agreement was $3,000, plus an unspecific percentage of whatever Kuchar won. Ortiz says he didn't expect to be paid like a regular PGA Tour caddie — a typical payout is 10 percent for a victory — but that he thought it was worth $50,000.

The story was panned in social media last month when PGA Tour Champions player Tom Gillis tweeted about it, saying Kuchar paid only $3,000. Asked about it at the Sony Open, Kuchar said: "It wasn't 10 percent. It wasn't $3,000. It's not a story."

According to the website, Ortiz wrote in a Jan. 24 email to Kuchar's agent, Mark Steinberg: "I am not looking to disparage Matt or give him a bad name. Fair is fair, and I feel like I was taken advantage of by placing my trust in Matt."

Ortiz says he wrote three emails and received one reply from Steinberg that said in part, "What Matt has offered is fair."

Alex Baldwin has been appointed president of the Web.com Tour, becoming the first woman to lead one of the six tours sanctioned by the PGA Tour. She replaces Dan Glod, president the last two years of the PGA Tour's main development tour, who is taking a role in sponsorship strategy.

Baldwin most recently was vice president of marketing partnerships for the tour.

PGA Tour commissioner Jay Monahan called it a "watershed moment for our organization."

Before joining the tour in 2017, Baldwin worked at Fenway Sports Management and CAA Sports. She also was an agent at IMG, where her clients included Hall of Famer Karrie Webb and Brad Faxon.

James Hahn and Kevin Kisner have been elected co-chairmen of the Player Advisory Council for 2019. That means they join the PGA Tour Policy Board next year for three-year terms. Hahn and Kisner were elected over Paul Casey and Justin Thomas. An international player has never served on the PGA Tour board. ... Hall of Fame pitcher John Smoltz, who won the celebrity portion of the Diamond Resorts Tournament of Champions, is getting sponsor exemptions to three PGA Tour Champions events — the Cologuard Classic in Arizona (March 1-3), the Mitsubishi Electric Classic outside Atlanta (April 19-21) and the American Family Insurance Championship in Wisconsin (June 21-23). ... The Web.com Tour added the Robert Trent Jones Golf Trail Championship in Alabama to its schedule, to be played April 18-21.

With his victory at Pebble Beach, Phil Mickelson joined Tiger Woods as the only players to surpass $90 million in career PGA Tour earnings. Woods, now with more than $115 million, went over the $90 million mark 10 years ago.

"The behavior is not acceptable. But what's going on? What's led to that behavior? That's the question." — Paul Casey, on Sergio Garcia damaging five greens out of frustration at the Saudi International.