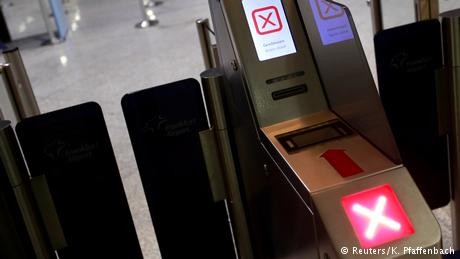 Belgium's air traffic control authority said on Tuesday it was forced to close the country's airspace between Tuesday 10 p.m. CET (2100 UTC) and the same time on Wednesday.

The strike in the country that hosts many EU institutions and NATO was called by unions seeking higher wages.

Belgium's air traffic control organization, skeyes, said in a statement that because of the staffing uncertainties, it was taking its responsibility "to guarantee the safety of air traffic."

In Belgium, workers do not have to say in advance whether or not they plan to work during trade union actions, making it difficult for authorities to predict availability.

Brussels Airport canceled all incoming and outgoing flights during the strike.

Nearby Charleroi airport, a local hub for Ryanair, announced its closure.

No aircraft flying below 8,000 meters — the area controlled by skeyes — will be allowed to fly over Belgium. Above that altitude, a control center in the Dutch city of Maastricht will control aircraft flying above Belgian territory.

Belgian rail and other public transport systems are expected to be hit hard during the stoppage. There will also be some minor disruptions to international rail services on Eurostar, Thalys and SNCB cross-border trains.

Brussels, home to NATO, will host a meeting of defense ministers on Wednesday, with officials from the transatlantic military alliance converging on the city.

"We have no indication of any impact of the strike on the meeting," said a NATO official.

The strike comes in response to a collapse in wage negotiations. The trade unions rejected a proposed increase of 0.8 per cent for 2019-2020, arguing that it was too low, reported the Belga news agency.