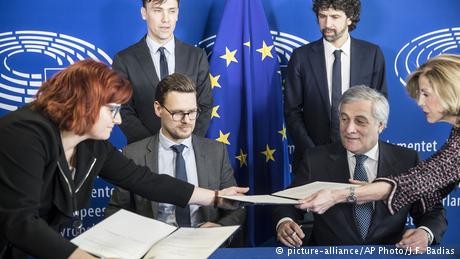 European Parliament on Tuesday announced a collaborative agreement with The International Organization for Professional Footballers (FIFPro) to promote participation in the upcoming EU elections in May.

The parliament said in a statement that its collaboration with FIFPro — more specifically the footballers' association's European branch — "will form an essential part of the Parliament’s on-the-ground campaign to engage citizens."

"Players are both citizens and professional athletes, but most of all they are role models. The 2019 European elections are the perfect occasion for football players to take the field and motivate Europeans to set the path for the European Union they want to live in," Parliament President Antonio Tajani said.

FIFPro is made up of 62 players' associations across the globe, 31 of which are in Europe, and represents 65,000 male and female footballers around the world. The organization has been affiliated with FIFA, world football's governing body, since 2009.

The European Parliament said it would work with FIFPro Europe "to create momentum in the lead-up to the elections and motivate as many European citizens as possible to vote in the 2019 European elections."

Nilla Fischer, a member of the Swedish women's national team who plays for Wolfsburg at the club level, was announced as the first ambassador of the campaign.

Tuesday's announcement comes exactly 100 days before the European Parliament elections in the EU's 27 member states (it's not inconceivable that the UK also has to put up candidates, in the event of a delay to Brexit), set to be held from May 23-26.

The EU has seen declining voter turnout in every parliamentary election since 1979. Turnout in 2014, the most recent election, was a disappointing 42.61 percent.

Low turnout has been a key driver of fringe, populist, euroskeptic parties at the European Parliament. This is because the euroskeptic voter base among the easiest to motivate for European elections. Nowhere was this more apparent than the UK five years ago, when UKIP — a party that's only ever had two MPs in the House of Commons in its history — won more MEP seats, 24, than any other British party.

The European Parliament and FIFPro said the main participating players' associations in their collaborative campaign reside in 10 countries: Italy, Spain, Croatia, Austria, Slovenia, Cyprus, Sweden, Finland, Portugal, and the Czech Republic. Of those nations, only Italy and Sweden had a voter turnout above 50 percent at the 2014 EU election.

Additionally, the European Council on Foreign Relations (ECFR) published a study on Tuesday which warned that anti-European parties could win a third of seats in the upcoming vote. Such a result, according to the ECFR, would "frustrate activity, undermine the security and defense of Europe, and ultimately sow discord that could destroy the EU over time."