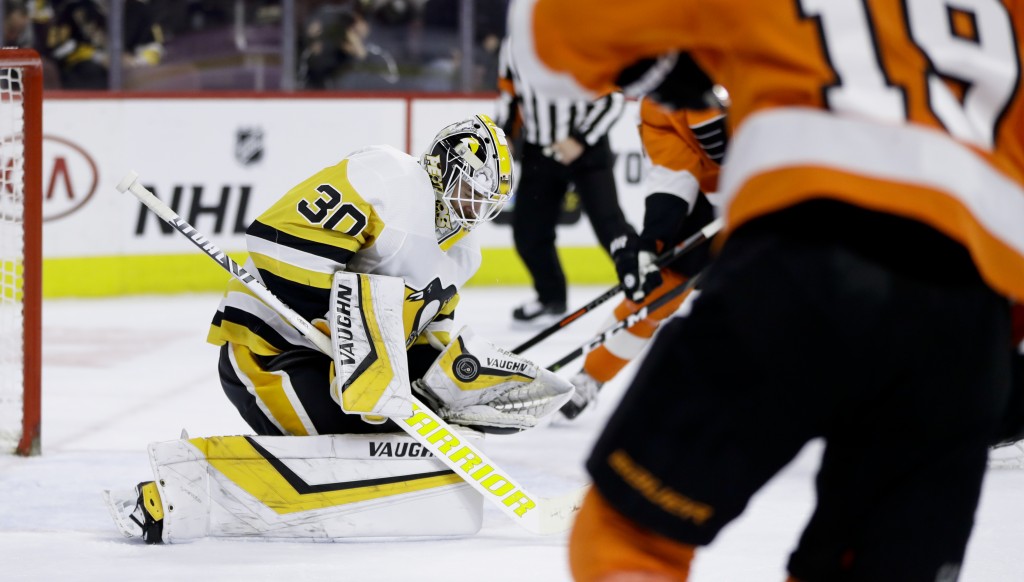 PHILADELPHIA (AP) — Matt Murray made 50 saves and Sidney Crosby had a goal and an assist to lead the Pittsburgh Penguins to a 4-1 victory over the Philadelphia Flyers on Monday night.

Jake Guentzel and Nick Bjugstad also scored and Kris Letang had an empty-netter for the Penguins, who snapped a four-game losing streak while winning for just the fourth time in the last 12. Pittsburgh entered holding the final wild-card spot in the Eastern Conference.

Jakub Voracek scored for Philadelphia, which lost for just the second time in 11 games. The Flyers could've pulled within four points of Pittsburgh with a victory, but now stand eight points behind the Penguins.

Flyers rookie goalie Carter Hart had his eight-game win streak halted, falling one game shy of setting an NHL record for consecutive victories prior to turning 21 years old. The 20-year-old also finished a game short of tying Pelle Lindbergh for the Flyers' rookie record for wins in a row. Hart had 24 saves.

Alex Ovechkin scored his NHL-leading 38th goal and had two assists and Brett Connolly, Christian Djoos and Jakub Vrana scored for the Capitals, who won for the third time in four games.

Kings goalie Jonathan Quick allowed six goals on 31 shots behind some uneven defense. Austin Wagner scored twice and Tyler Toffoli and Oscar Fantenberg each had a goal for Los Angeles, which went 3-2-1 on its six-game trip.