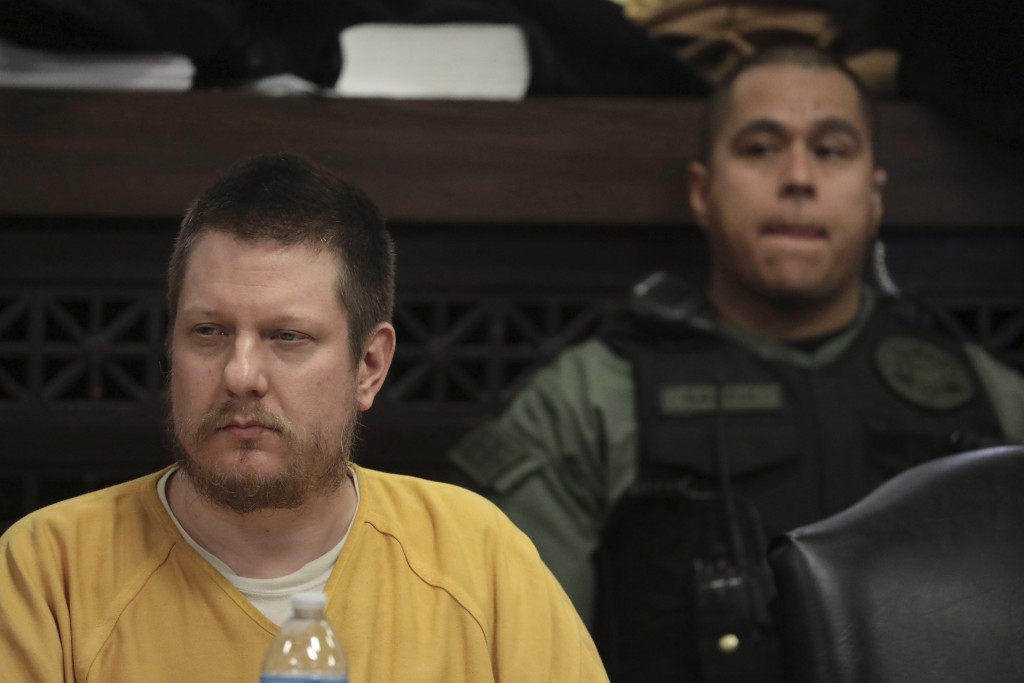 CHICAGO (AP) — Judge Vincent Gaughan sentenced former Chicago police officer Jason Van Dyke in January to six years and nine months in prison in the 2014 shooting death of black teenager Laquan McDonald. Van Dyke shot McDonald 16 times, including after the 17-year-old was on the ground. A jury convicted him in October of second-degree murder and 16 counts of aggravated battery — one for each bullet he fired.

Some key moments in the case:

Oct. 20: Van Dyke fatally shoots McDonald after responding to a call about a teenager breaking into vehicles in a trucking yard. Other officers back Van Dyke's claim that McDonald, who had a small knife with its blade folded, posed a threat to Van Dyke's life.

Nov. 24: Cook County State's Attorney Anita Alvarez announces that she is charging Van Dyke with first-degree murder. Hours later, the city responds to a judge's order and releases dashcam video of the shooting that shows McDonald veering away from officers. The footage contradicts the accounts of Van Dyke and other officers on the scene that he lunged at them with the knife. The video's release sparks days of protests.

Dec. 7: The U.S. Department of Justice announces that its civil rights division will investigate the police force, looking for patterns of racial disparity in its use of force.

Dec. 9: Emanuel apologizes for McDonald's killing in a speech before the City Council. He says Chicago's police force needs "complete and total reform."

Feb. 16: The city of Chicago says it will release videos of police shootings and in-custody deaths within 60 days, after being criticized for refusing to release the McDonald shooting video for more than a year.

April 12: A task force established by Emanuel to look into police practices in the wake of the McDonald shooting says the department must acknowledge its racist past and overhaul its handling of excessive force allegations. It also recommends abolishing the Independent Police Review Authority, which investigates officer misconduct.

April 21: Emanuel announces changes to how police shootings and misconduct cases are handled but draws criticism for stopping short of abolishing the Independent Police Review Authority.

May 13: Emanuel announces that he is abolishing the Independent Police Review Authority and replacing it with the Civilian Police Investigative Agency, which will have more independence and resources.

June 3: Chicago releases hundreds of videos that offer startling glimpses into violent encounters involving police, including the fatal shooting of a robbery suspect speeding toward officers in a van and an incident in which an officer slammed his night stick against a man's head at a party.

Oct. 7: Johnson releases details of a proposed new policy that would require officers to use the least amount of force necessary and emphasizes the "sanctity of life."

Nov. 16: A special prosecutor says a grand jury has been impaneled to hear evidence into a possible cover-up by Chicago police officers in the McDonald shooting.

Jan. 13: The Justice Department announces the findings of its civil rights investigation. It says the Chicago Police Department has violated the constitutional rights of residents for years — permitting racial bias against blacks, using excessive force and killing people who didn't pose a threat. It concludes that the pattern was attributable to "systemic deficiencies" within the department and the city, including insufficient training and a failure to hold bad officers accountable for misconduct.

March 23: A grand jury adds 16 counts of aggravated battery with a firearm to the first-degree murder charges against Van Dyke in the McDonald shooting.

May 17: The Police Department releases a new use of force policy that requires its officers to undergo de-escalation training and imposes stricter rules on when they can fire their weapons at fleeing suspects.

June 3: Media reports say the city of Chicago and the Justice Department have negotiated a draft agreement that calls for an independent monitor to oversee changes for the police force, which is the nation's second largest. But it is unclear whether there will be court oversight at some stage in the future.

June 14: Leading community groups, including a Black Lives Matter organization, file a class-action lawsuit against Chicago in a bid to bypass or scuttle a draft agreement between the city and the Justice Department that seeks to reform the police without federal court oversight.

June 27: Three Chicago police officers are indicted on felony charges that they conspired to cover up Van Dyke's actions in the killing of McDonald.

Aug. 28: The city changes course and says it wants to carry out far-reaching reforms of its police under strict federal court supervision, abandoning a draft deal on reforms with President Donald Trump's administration that envisioned no court role.

Nov. 14: The grand jury that indicted three Chicago police officers on charges that they conspired to cover up what happened when Van Dyke fatally shot McDonald disbands without indicting anyone else in the department.

March 20: The American Civil Liberties Union and several community organizations say that they have reached an agreement to provide input into changes being proposed for the Chicago Police Department.

Oct. 4: Jury begins deliberations after being told that they also can consider the lesser charge of second-degree murder .

Dec. 6: After hearing a week's worth of testimony, Cook County Judge Domenica Stephenson says she will analyze the evidence before delivering her verdict to the three.

Jan. 17: Stephenson acquits Walsh, March and Gaffney of trying to cover up the shooting death of McDonald.

Jan. 18: Van Dyke is sentenced to six years and nine months in prison for the shooting death of McDonald.

Feb. 11: Prosecutors ask the Illinois Supreme Court to review what they see as a too lenient sentence for Van Dyke.

For the AP's complete coverage of the Jason Van Dyke case: https://apnews.com/tag/LaquanMcDonald