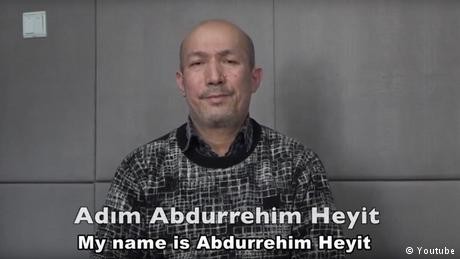 China released a video of Uighur poet and musician Abdurehim Heyit late Sunday in an attempt to disprove reports of his death in custody.

The unverified video, published by China Radio International's Turkish service, comes after Turkey's Foreign Ministry reported Heyit's death in a statement on China's detention of Uighurs and other Muslim minorities.

Read more: What does China want to achieve by 'modifying' Islam?

What the video shows

In a statement on Saturday, Turkish Foreign Ministry spokesman Hami Aksoy said it's "no longer a secret" that China has detained more than 1 million Uighurs in "concentration camps." He said they faced "systematic assimilation" in western China. Aksoy said Turkey had also learned of Heyit's death in prison after being sentenced to eight years over one of his songs. "This tragedy has further reinforced the reaction of the Turkish public opinion toward serious human rights violations committed in the Xinjiang region," Aksoy said.

China denied the existence of the so-called "re-education" facilities for months before announcing they were training centers to stop the spread of terrorism and extremism following ethnic riots in 2009 and terrorist attacks in Xinjiang and elsewhere.

Who are the Uighurs?

The Uighurs are a majority Muslim, Turkic ethnicity. They mainly reside in the Xinjiang Uighur Autonomous Region in western China.