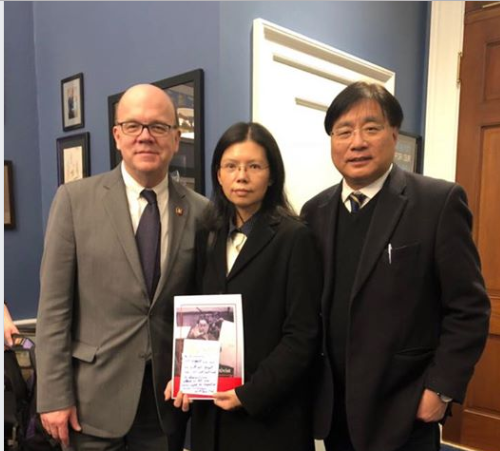 The activist was approaching his 700th day in jail in China, after having disappeared shortly after crossing over from Macau in March 2017. He was sentenced to five years in prison for so-called subversive activities, and his wife’s most recent applications to visit him at the Hunan jail have been rejected.

McGovern, a Massachusetts Democrat active on human rights causes in El Salvador and Colombia, told Lee Ching-yu he would personally discuss with House Speaker Nancy Pelosi how to get her husband released, the Apple Daily reported.

The Congressman reportedly also supported a plan to have President Trump meet with relatives of the victims of Chinese oppression before his next encounter with China’s President Xi Jinping (習近平).

In the meantime, McGovern wrote a postcard to Lee Ming-che in prison telling the human rights activist about the international support for his release, the Apple Daily reported.

“We support you and we will not forget you. We will continue to demand your release and that your human rights be respected,” he wrote. It was not known whether Lee had been allowed to read the message.

The Congressman was one of the authors of the Reciprocal Access to Tibet Act, which was likely to lead to Chinese leaders involved in the repression in Tibet to be banned from entering the U.S.

Pelosi once sponsored the Chinese Student Protection Act of 1992, helping Chinese fleeing their country following the 1989 Tiananmen massacre, according to the Apple Daily.