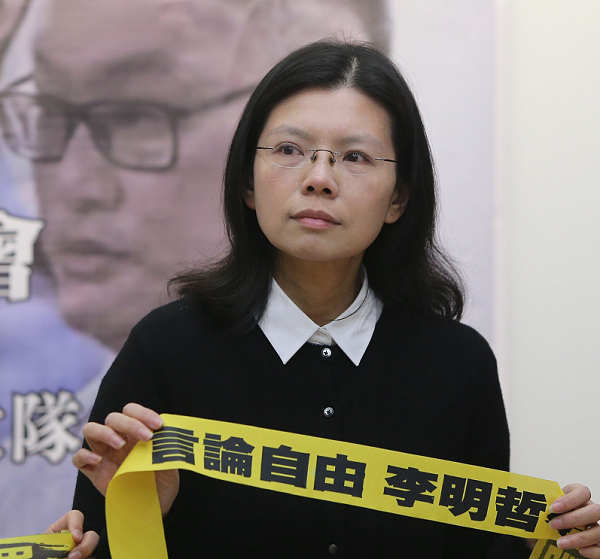 TAIPEI (Taiwan News) — Lee Jing-yu (李凈瑜), wife of jailed Taiwanese human rights activist Lee Ming-che (李明哲), attended the U.S. State of the Union address on Tuesday during a week-long trip in which she will seek international assistance for her husband.

Lee attended at the invitation of Republican representative Chris Smith, making her the first Taiwanese person ever invited the event. Smith is a member of the U.S. Congress Taiwan Caucus—the second largest Congressional Member Organisation, with 137 members.

The invitation was sent in view of Section 2 of the Taiwan Relations Act, said Lee, which declares, “The preservation and enhancement of the human rights of all the people of Taiwan are hereby reaffirmed as objective of the United States.”

Yang said the State of the Union address is an important national ceremony; a report from the president to Congress on the future implementation of important policies to safeguard national sovereignty. Guests are not limited to U.S. citizens, he added, and those in attendance will be listed on the official records of the U.S. Congress.

On Monday, Lee met with president of U.S. NGO National Endowment for Democracy Carl Gershman, who left her a written message offering his support.

Lee last visited the U.S. seeking assistance in May 2017, when she was received by Matthew Pottinger, senior director of Asian Affairs at the National Security Council. TACHR indicated any U.S. official visiting Taiwan within the next year would likely seek a meeting with Lee through the mediation of the U.S. Congressional-Executive Commission on China.

Lee Ming-che disappeared for 10 days after entering China on March 19, 2017. The country’s Taiwan Affairs Office announced he was suspected of engaging in activity that endangered China’s national security and had been detained for investigation.

He was sentenced to five years in prison and two years without political rights on Nov. 28, 2017 for “attempting to subvert state power.”

Lee Ming-che is currently held in Hunan Province’s Chishan Prison. His wife was able to visit six successive times before being denied visitation rights in January after holding a press conference on Dec. 18 where she revealed Lee had been subject to inhumane conditions during his imprisonment.

A notice she received last month declares she will be able to visit her husband again after April 22.