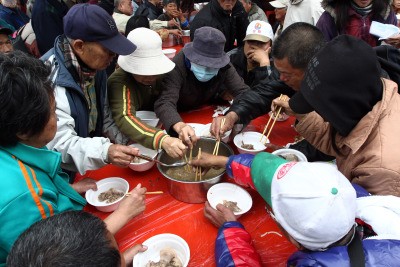 TAIPEI (Taiwan News) -- On Lunar New Year's Eve, families will be gathering from far and wide to tuck into a sumptuous reunion dinner—although this humble tradition is often not enjoyed by everyone.

A 79-year-old Gua-bao (刈包) vendor took to the streets ahead of and during the Lunar New Year holiday again this year, however, to set tables and ensure around 6,000 homeless people will get to enjoy a feast of delicious dishes.

Liao Jung-chi (廖榮吉) began hosting outdoor "reunion dinners" for the homeless and poor in 1985, and continued to do so each year after receiving funding from others; although funds have dwindled amid the prolonged period of slow economic growth.

Liao told media that the number of tables hit a record high of one thousand in 2013, when the event was held at a riverside parking lot over a period of four days.

This year, the event will be held in Tucheng, New Taipei City, from Lunar New Year's Eve to Feb. 6, with 600 tables over four days.

Liao said the feast costs him approximately NT$4 to 5 million (US$130,000 to US$162,000) each year, but the sponsorship has continued to shrink to one-third of the overall expenses this year. The event has never received subsidies from the government.

"I will continue the initiative as long as I am alive," he said.

This year, the tables for the homeless and poor will be filled with many flavorful dishes, including steamed fresh shrimp, sweet & sour fish, Chinese medicinal herb and pork intestine soup (Sishen Soup, 四神湯), and sesame oil chicken (麻油雞). The event will also provide takeaway noodles and red-envelopes (紅包) to warm the hearts of participants in the cold winter.