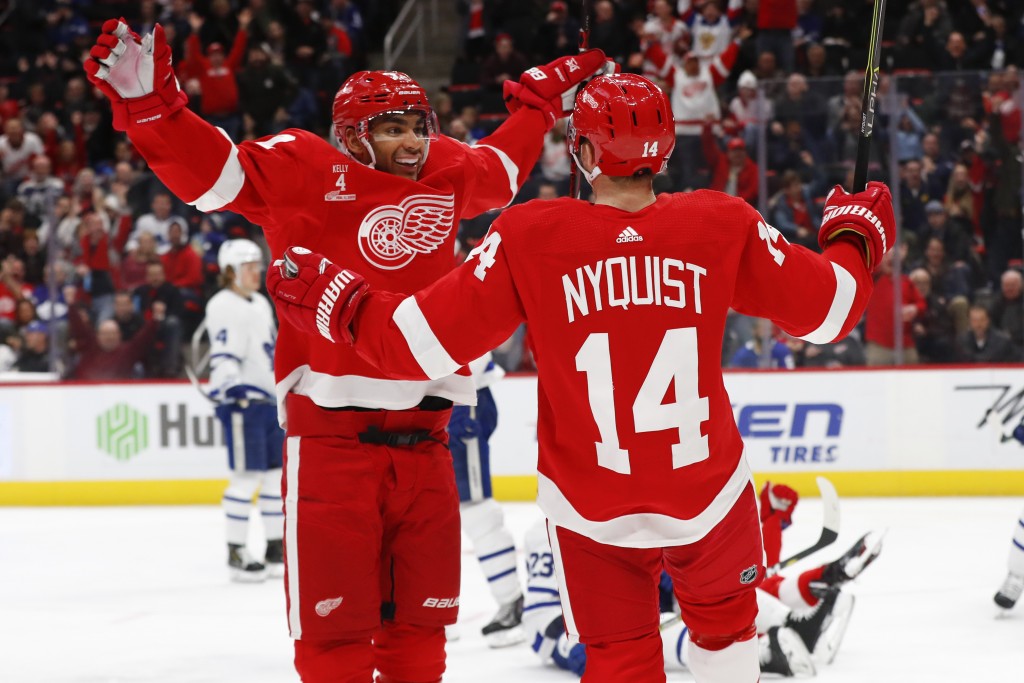 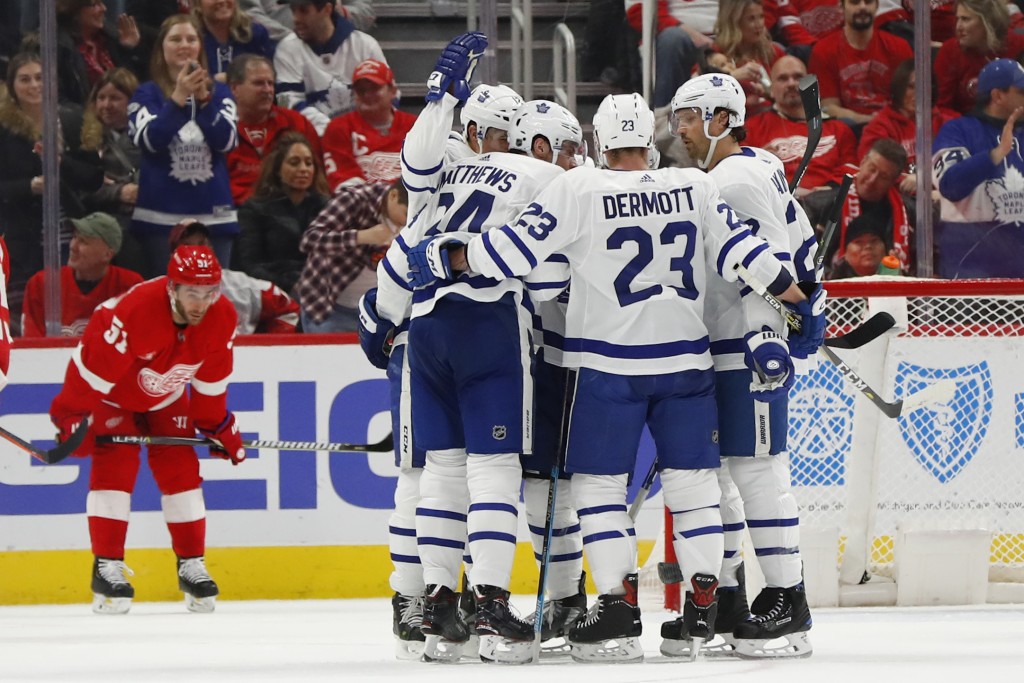 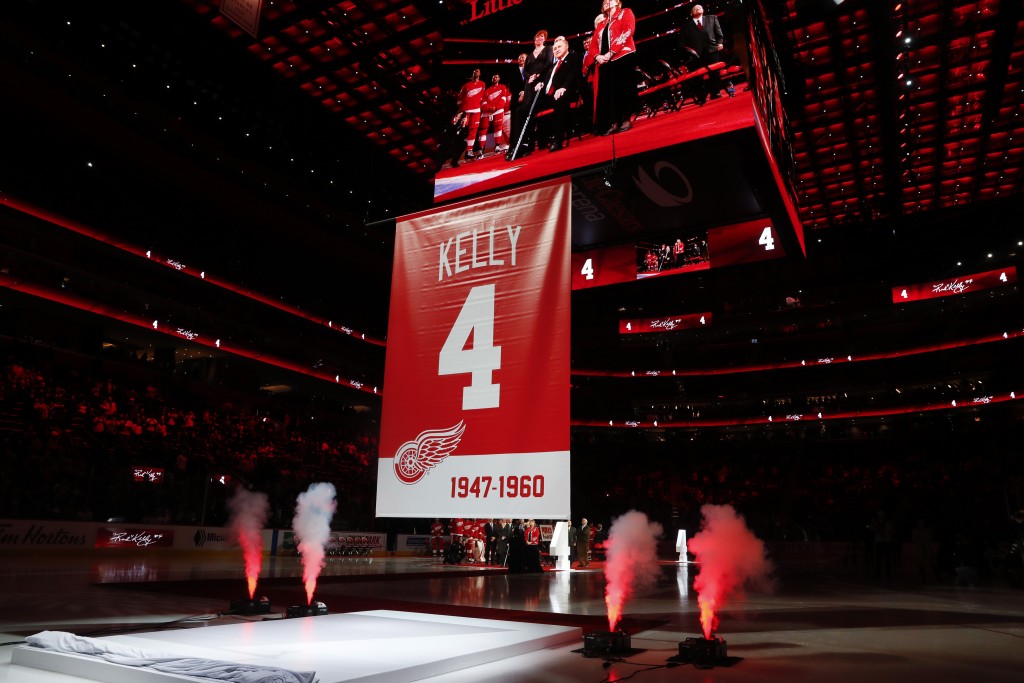 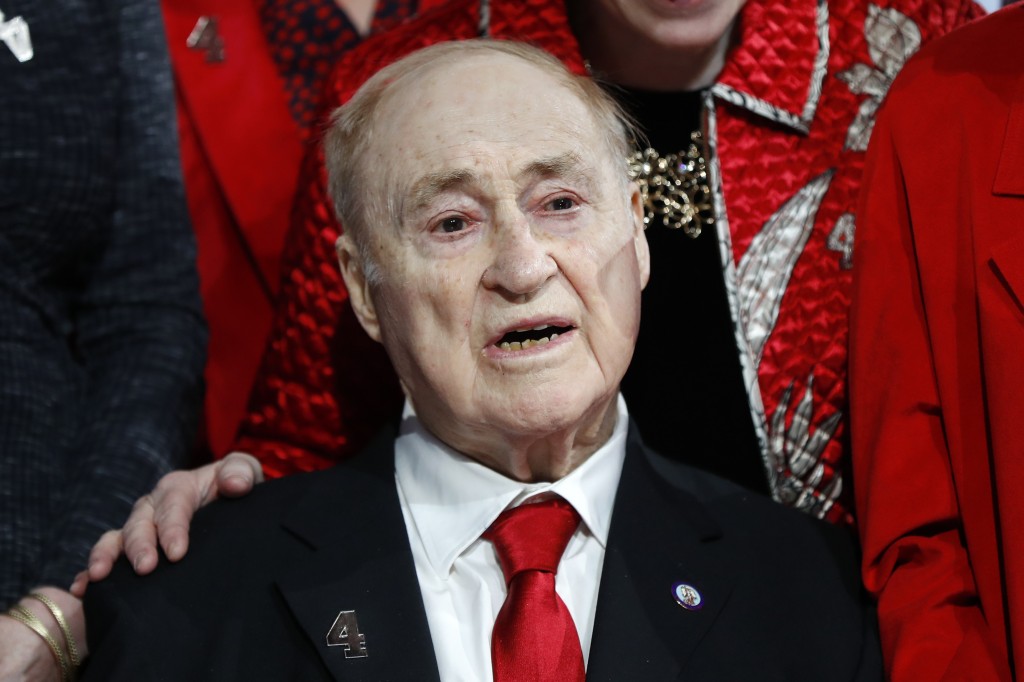 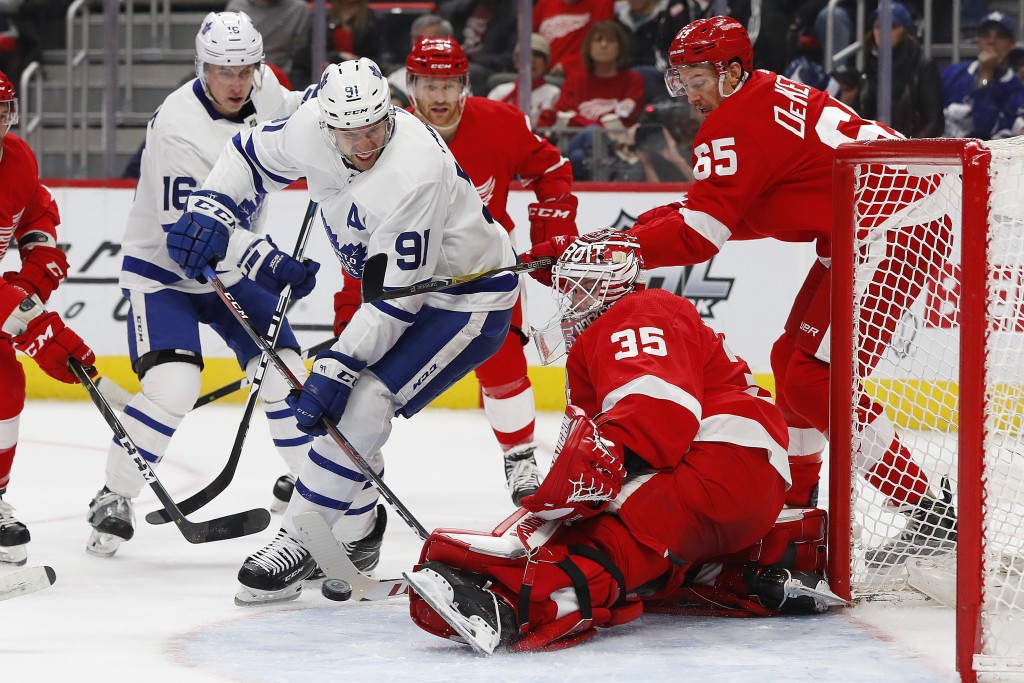 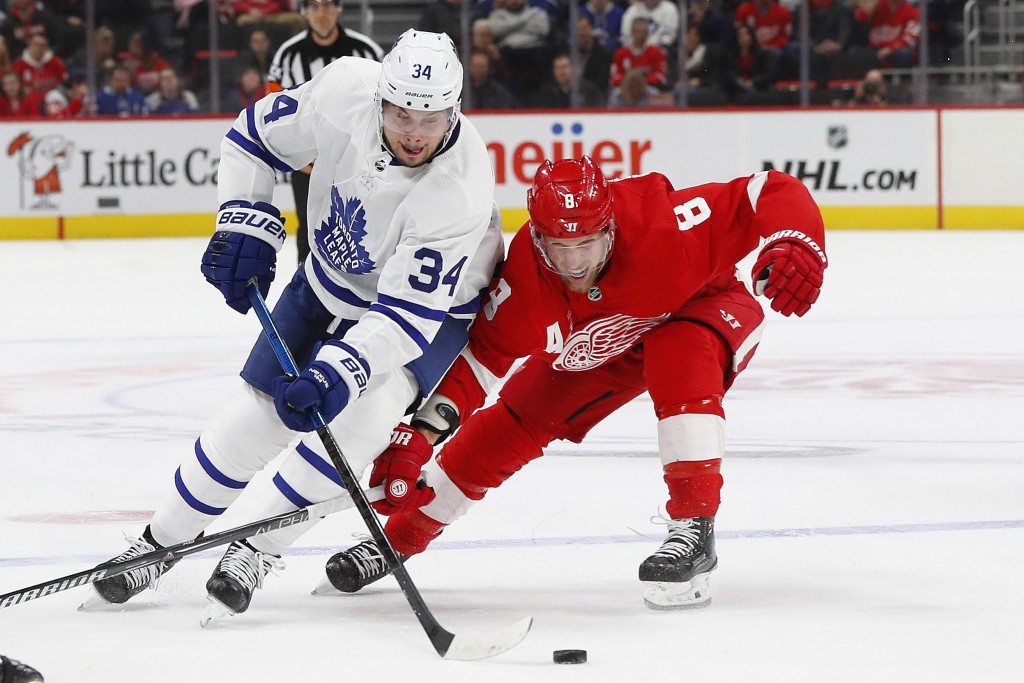 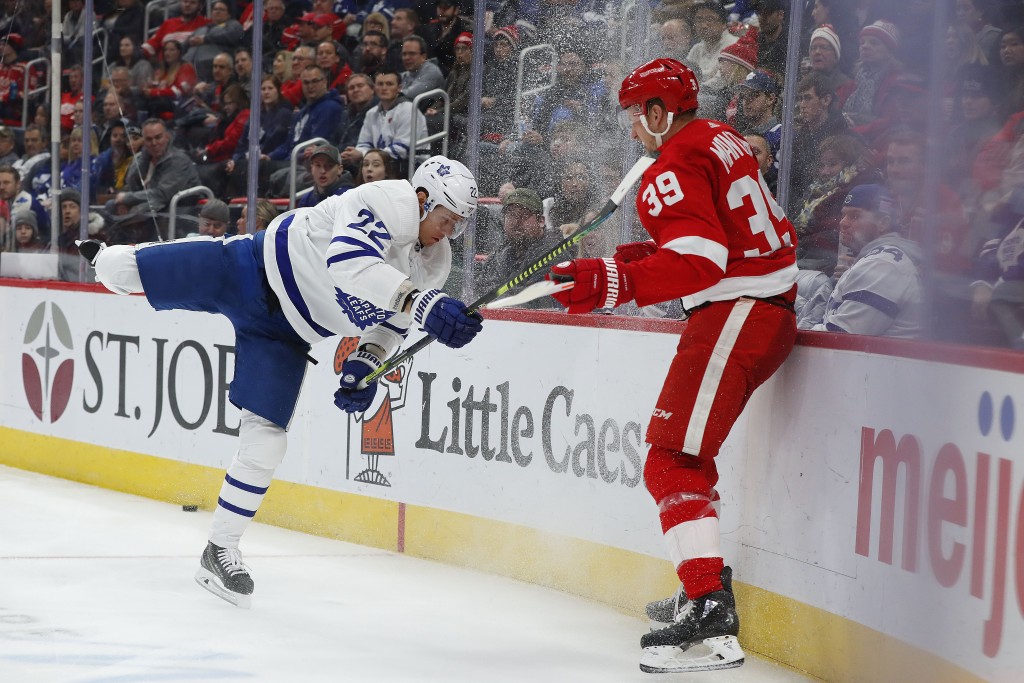 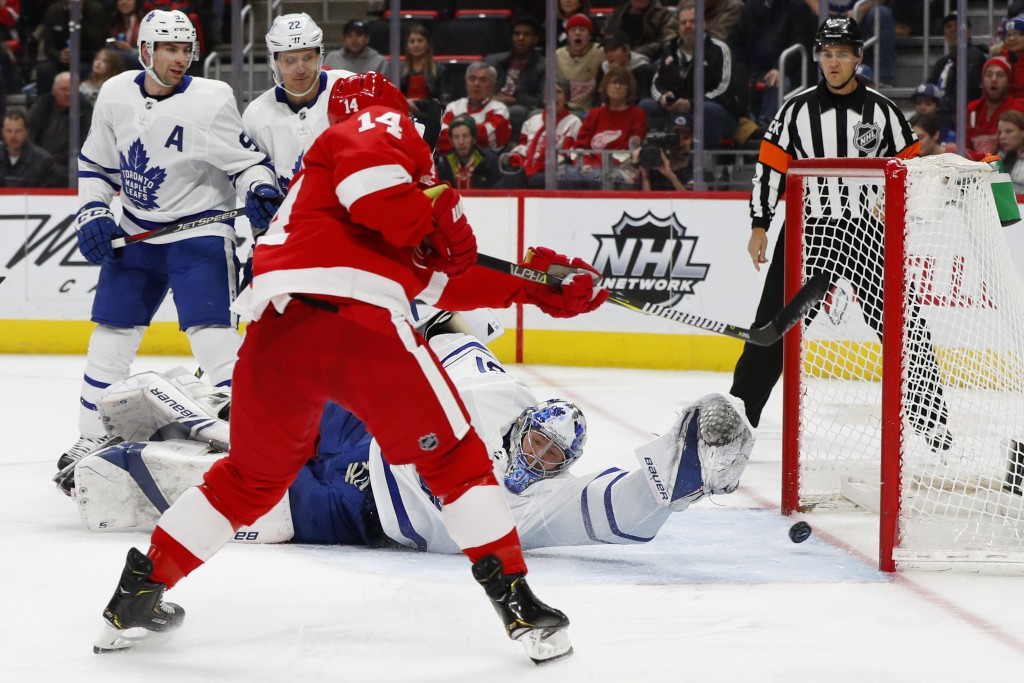 DETROIT (AP) — Danny DeKeyser scored 2:40 into overtime, lifting the Detroit Red Wings to a 3-2 win over the Toronto Maple Leafs on Friday night.

The Red Wings retired Red Kelly's No. 4 during a pregame ceremony, making his jersey the eighth to go up in the rafters along with all-time greats such as Gordie Howe, Steve Yzerman and Nicklas Lidstrom. Kelly was the first Norris Trophy winner in 1954, honoring the NHL's top defenseman. The Hall of Famer won four Stanley Cups with Detroit and four more with the Maple Leafs, who previously retired his number.

Dylan Larkin scored a tiebreaking goal on a power play with 6:27 left in the third and Patrick Marleau had a goal to make it 2-all with 2:19 remaining in regulation.

Early in overtime, Larkin skated off the ice after grabbing at the right side of his abdomen.

Detroit's Gustav Nyquist broke a scoreless tie midway through the second and Auston Matthews tied it late in the period.

Jimmy Howard made 19 saves for the Red Wings. Frederik Andersen stopped 30 shots for the Maple Leafs.

Both teams were coming off a long break, playing for the first time in more than a week after a bye week and the All-Star break.

Toronto looked rusty while going nearly 14 minutes before getting its first puck on Howard and was outshot 10-5 in the opening period.

The Maple Leafs failed to take advantage of two power plays in the first period and went 0 for 5 with an extra skater midway through the third period. The Red Wings, likewise, were struggling on the power play on three chances before Larkin scored from the left circle with a shot that went off Andersen's left shoulder.

Marleau scored after Toronto pulled Andersen to add an extra skater and he knocked in the puck after Matthews made a fluttering pass across the crease.

NOTES: Kelly played for the Red Wings from 1947 until they traded him to Toronto during in 1960. He was an offensive defenseman in Detroit and played center for the Maple Leafs. He retired in 1967 with 281 goals and 823 points. ... D Jake Muzzin made his debut with the Maple Leafs after being acquired from the Los Angeles Kings for a first-round pick and two prospects. ... Detroit scratched Tyler Bertuzzi and he is expected to miss at least another game with an upper-body injury.