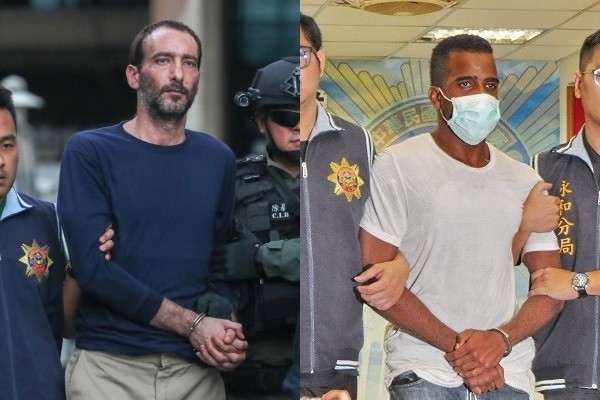 TAIPEI (Taiwan News) -- As the trial for the murder and dismemberment of a Canadian English teacher in New Taipei City began on Wednesday (Jan. 30), the two primary suspects provided wildly differing versions of their involvement in the murder, reported Liberty Times.

Israeli-American Mayer Oren Shlomo, 37, and American Ewart Odane Bent, 30, have been charged with the murder of 43-year-old Canadian English teacher-turned drug dealer Sanjay Ryan Ramgahan (顏柏萊) on Aug. 21 last year, as well as abandonment and destruction of a corpse. While Taiwanese-Canadian Wu Hsuan (吳宣), 21, also known as Dan Wu, and American Jason Hobbie, 46, have been accused of being accomplices to the crime.

According to prosecutors, after noticing how lucrative Ramgahan's illegal marijuana dealing business had become, Mayer enlisted Bent, Wu, and Hobbie to join him in drug trafficking. However, in May of last year, Ramgahan was arrested by police and because Mayer began to suspect that he had become a police informant, he plotted to murder him.

In addition to searching for a "diagram of the human body" to better understand the anatomy of the human body, Mayer directed Wu to buy the murder weapons and help serve as a lookout at the scene of the crime. Mayer also told Wu and Hobbie to set off fireworks as a signal and to purchase gasoline to burn the evidence.

Prosecutors allege that on the night of Aug. 21 last year, Mayer approached the victim from behind with a wire saw and strangled him, while Bent helped restrain him. They allege that Mayer and Bent then took out machetes to dismember Ramgahan's body.

On Wednesday, Bent denied that he took part in the murder of Ramgahan. He claimed that he was not aware of the intent of the meeting with Ramghahan, and witnessed Mayer suddenly strangle the victim with the metal wire.

Bent claimed that he was intimidated by Mayer and followed his orders to help dismember Ramgahan's body after he had already died. He confirms that they then placed the remains in bags and tossed them in the Sindian River in New Taipei City's Yonghe District on Aug. 22 last year.

On Thursday (Jan 31), Mayer countered Bent's testimony by claiming that Bent had threatened to harm his son and girlfriend and forced him to summon the victim to meet them at the riverside park. When the three of them met at the park, Mayer claims that Bent and the victim went to another location, while he stayed next to the stairs.

Mayer claims that he did not see Bent return until 12:30 a.m. the next day, and it was only then that he learned that Bent had murdered Ramgahan. Mayer said that after he discovered what Bent had done, and even though he feared for his safety, he angrily chastised Bent and told him to "leave me alone!"

Mayer's attorney, Leon Huang (黃致豪), argued that Bent had influenced and colluded with Wu and Hobbie to place all the blame on his client. Huang appealed to the judges to reexamine the 21 items of evidence, such as Bent's violent tendencies.

He also asked to enable his client to cross examine Bent, Wu, and Hobbie. The prosecution said that there was ample evidence to prove the charges and asked the court to deny Huang's requests.