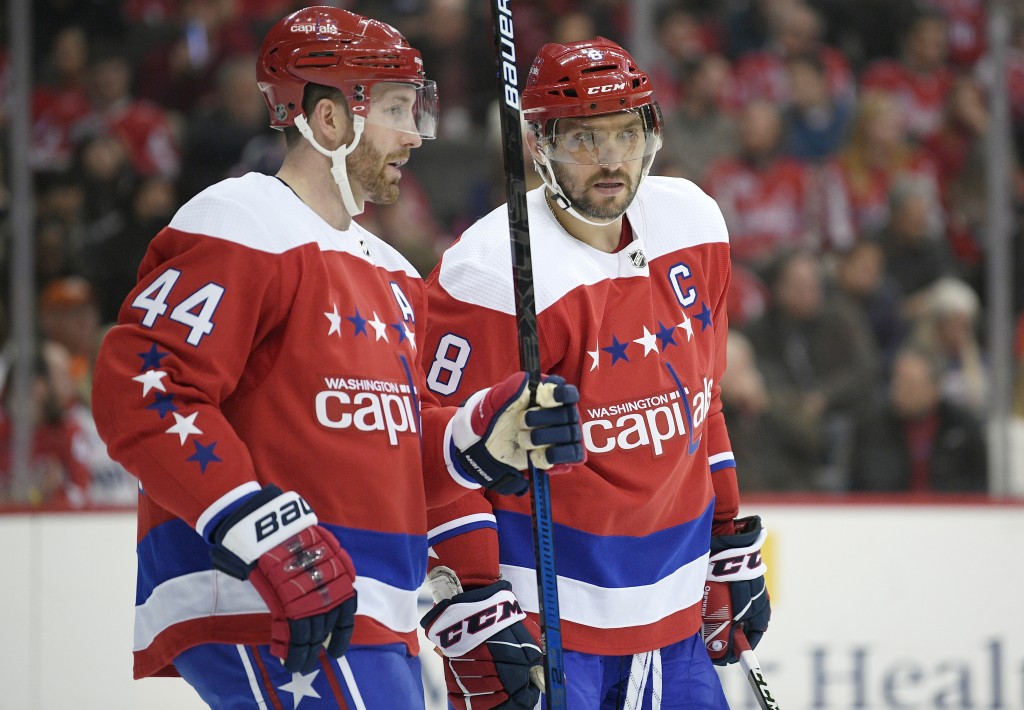 Tired after losing seven consecutive games and tired in the middle of another long slog after winning the Stanley Cup last season. By the time they got back on the ice Thursday for their first practice after the All-Star break and league-mandated bye week, the Russian superstar captain saw something completely different.

"Maybe it was too much hockey," Ovechkin said Thursday. "Today I look at the guys and I can see everybody is missing the hockey and everybody flying, everybody laughing, everybody don't think about what happened a week ago or how many games we lose in a row."

The seven straight losses are the Capitals' most since the 2013-14 season that led to the firing of general manager George McPhee and coach Adam Oates. Even though they never lost more than three consecutive games last year before lifting the Cup for the first time in franchise history, the Capitals hope their woeful ways are a thing of the past and will help them on the way to a repeat bid.

"In a way, it's a good thing for us right now because we were going to have to have something like this to push us in the right direction," goaltender Braden Holtby said. "It's almost one of those reality checks to move on and stay in the moment instead of in the past or relying on the past. Now we're focused on our team and where it is right now and getting better and being the best we can."

The dreaded "Stanley Cup hangover" can have many effects, including the defending champion wearing down come playoff time. The Pittsburgh Penguins never dropped more than four in a row during either of their reigns as defending champions the past two years but did lose nine of 14 during one stretch last season.

Holtby wonders if Washington's talent and experience masked some flaws even before this 0-5-2 stretch when all the good fortune wore off. Suddenly, defensive-zone coverage broke down, and the Capitals have allowed 36 goals during their skid.

Defenseman Matt Niskanen said before the break, "Obviously there's a few things that feel like a mess right now." After some time away, the Capitals were able to get back to basics on cleaning up that mess.

"We started to address some of those today and start moving forward with doing a better job of playing to our team identity: eliminating the chance-for-chance opportunities that we were giving up and just defensive breakdowns," coach Todd Reirden said. "It's been a really good time for our players to reset mentally and get some rest physically and get ready for these final 32 games here."

No team could've used a break more than the Capitals, who looked nothing like the dominant champs over the past several weeks. They gave up eight goals at Chicago, coughed up a two-goal, third-period lead to San Jose that included the Sharks scoring with 1 second left and followed those up with a lackluster loss at Toronto before dispersing to locations tropic and otherwise.

Center Nicklas Backstrom, one of the few Capitals players still around from the 2013-14 days, chalks it up to things snowballing on a losing streak just like they can in a positive way on a winning streak. He thinks the break came at the perfect time for a mentally fatigued group that's ready to recoup what it's lost in the standings.

"You've got to make sure you're collecting some points every night," Backstrom said. "I think this part is probably most important. This is where you come together as a team and really play your best hockey."

The Capitals will play first game after their break Friday against the Western Conference-leading Calgary Flames without Ovechkin, who has to sit out because he skipped All-Star Weekend. Perhaps after abandoning some structure in recent losses, Ovechkin's absence will force his teammates to lock down defensively and play the brand of hockey that won them a championship.

"Definitely we'll miss him, especially coming back here after a break," Reirden said. "In this situation, it's about guys figuring out how to play within themselves and simplify our game and not give them any free offense, which is something we're trying to rectify."