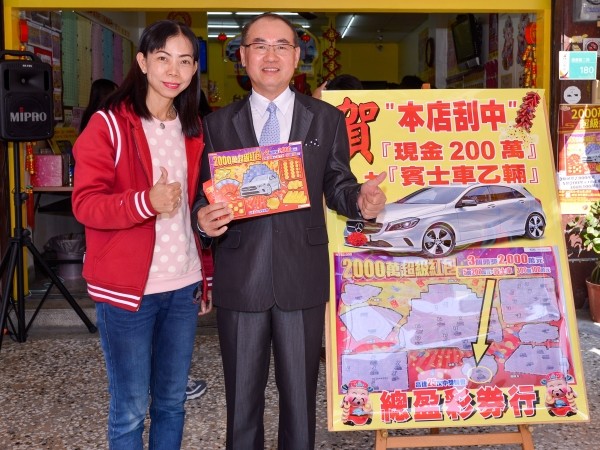 In order to stimulate sales during the Lunar New Year, the Taiwan Lottery on Jan. 3 announced that it is launching five new limited-edition Lunar New Year scratch cards, including the "Super Red Envelope," "Monopoly," "Triple Double," "Catering," and "Speeding 777."

Taiwan Lottery General Manager Tsai Kuo-chi (蔡國基) today went to Tainan to issue a certificate for the second-place prize. Taiwan Lottery representative Lee Pei-lan told the media today that the winner of the NT$2 million prize and car was a thin, middle-aged woman in her 50s, who frequently buys NT$300 scratch cards.

Lee said that the woman started her lucky streak by purchasing the Super Red Envelope card and winning NT$1,000. She used her winnings to buy another scratch card, and then won NT$2,000.

She again used her winnings to purchase a third scratch card, and this time she hit the NT$2 million jackpot, which included the Mercedes-Benz A180. Lee said that when the woman scratched the winning card, she could not believe she had really won and checked it several times to confirm.

The woman then took her son with her to the lottery store to confirm that she had indeed won NT$2 million. Once the shop owner verified the news, the woman happily said to her son, "I give the car to you. Later, I can ride all around in your Mercedes," reported Apple Daily.

Tsai said that out of the five second-place prizes originally available, the woman's win leaves four more still up for grabs. Tsai added that out of 300 prizes worth NT$1 million each, only 20 have been claimed, leaving 280 still waiting to be won.