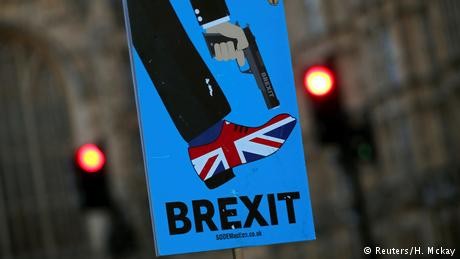 Britain risks an accidental crash-out of the EU, warned the deputy to EU Brexit negotiator Michel Barnier on Monday. In some of her toughest remarks, Sabine Weyand slammed Prime Minister Theresa May's handling of the divorce talks.

"There is a very real risk of crash out. Not by design but by accident," Weyand told an audience invited by the European Policy Centre think tank.

Weyand said that May had kept members of her own government in the dark during 18 months of intense negotiations.

As a result, she argued, many lawmakers were surprised by the content of thewithdrawal deal May signed with EU leaders in November— and overwhelmingly rejected it.

May is now seeking tweaks to the accord and to a parallel political declaration on future EU-British relations in the hope of belatedly winning domestic support.

The UK parliament on Tuesday will debate and vote on competing proposals about what to do next following the rejection of May's deal.

Fourteen amendments to May's deal have been proposed, several of which will be selected for a debate and vote. John Bercow, speaker of the House of Commons, will announce which ones have been chosen around 1400 CET (1300 UTC) on Tuesday. After about six hours of debating, voting on each amendment will take place, one by one.

May has reportedly been asking her lawmakers to support an amendment calling for a Northern Irish backstop — a kind of insurance policy aimed at preventing a hard border in Ireland — to be replaced with alternative arrangements.

But leading pro-Brexit Conservative lawmaker Jacob Rees-Mogg said he and his "hard Brexit"-backing allies would not support the amendment because "it doesn't say what [the backstop] would be replaced with."

Other key proposals seek to rule out a no-deal exit and prepare for a second referendum in which the option to remain in the EU would be on the ballot paper.

The remaining 27 EU member countries have meanwhile been intensifying their preparations for a no-deal Brexit. Italy's Finance Ministry said last week that it had drafted no-deal measures to protect the country's finance industry.