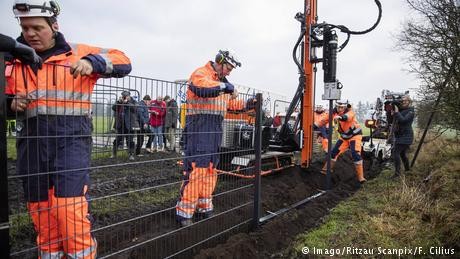 Denmark began construction of its controversial swine fence on the German border on Monday.

Copenhagen hopes the planned 70-kilometer (40-mile) fence will halt the spread of African swine fever, transmitted by wild boar, if it ever arrives in Germany. It will stand 1.5 meters (5 feet) tall, run along the entire German border and extend 50 centimeters beneath the earth.

The project, due to be finished in autumn 2019, has attracted considerable controversy for environmental, practical and political reasons.

The first trenches for the 30.4-million-Danish krone (€4.1 million, $4.6 million) barrier were dug at about 10 a.m. local time at Padborg, 15 kilometers west of the German city of Flensburg. Authorities meanwhile initiated a large-scale, four-day exercise to test the country's preparedness for the disease, Danish tabloid Jyllands Posten reported.

The Danish government has also introduced round-the-clock checks for wild boar and intensified control of wild boar on public and private land. Fines have been hiked for various offenses, including improperly cleaned or disinfected animal transport vehicles, and signs have been erected at motorway rest areas warning against throwing away food waste.

"We have 11 billion good reasons to do everything in our power to prevent African swine fever from reaching Denmark," Danish Environment and Food Minister Jakob Ellemann-Jensen said in a statement, referring to the value of its non-EU pork exports.

Why is Denmark so worried?

Denmark exports about €4 billion of pork each year and worries that if the disease crosses the border it will have to immediately halt non-European Union exports, which make up almost half of that amount.

Agricultural association LandboSyd says the disease threatens the livelihood of up to 33,000 people employed in the industry.

A large portion of the pig farms are near the German border, making them particularly susceptible. Denmark is the only EU country where pigs outnumber people.

What is the problem with fence?

German lawmakers have criticized the fence, saying the virus is mainly spread by people during the transport of animals and infected food.

The state environment and agriculture minister of the border state Schleswig-Holstein, Jan Philipp Albrecht, told regional paper Schleswig-Holsteinischer Zeitungsverlag (SHZ) he had substantial doubts about the sense and necessity of a fence between Denmark and the north German state.

The Denmark branch of WWF has warned the barrier will disturb wolves, otters and gold jackals, which are enjoying a resurgence in the region. WWF's Bo Oksnebjerg told SHZ many animal species would be unable to find the 20 permanent passages in the fence, but that wild boars were perfectly capable of crossing the barrier. "They can run 35 kilometers per hour. They will find a hole within a few minutes." They are also good swimmers and could thus circumvent the fence.

Local resistance has also formed, with online Facebook groups such as "Vildsvinehegn - nej tak" (wild boar fence - no thanks), formed by a local hunter, saying the fence makes little sense from a technical point of view.

The fence has even been linked to efforts by the Danish government to appeal to right-wing voters. Politicians from the right-wing populist Danish People's Party have previously called for a tall, barbed-wire fence with motion detectors along the German border to counter an influx of migrants.

Where is the virus now?

No cases of African swine fever have been reported in Germany, however the Friedrich-Loeffler Institute (the Federal Research Institute for Animal Health) says there is a high chance of the disease arriving.

It has been detected in the Baltic States, Poland, the Czech Republic and Hungary as well as a few cases in Belgium last autumn.

The fever is not dangerous to humans, but is almost always fatal in pigs. There is no vaccine.

French authorities are reportedly planning a fence to stop the disease spreading from Belgium while soldiers have been instructed to help local hunters find wild boar.