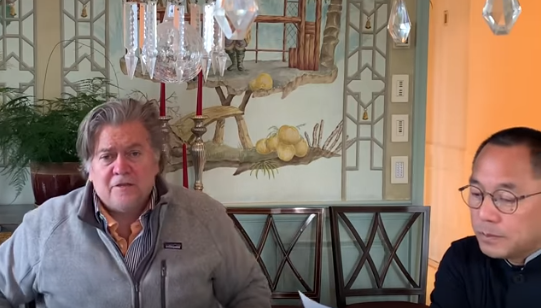 During their talk, Bannon is asked by Guo how he thinks the United States would respond if China launched a military attack against Taiwan.

In response, Bannon says that “economic incompetence of the Chinese Communist Party (CCP)” may lead Beijing to promote an invasion of Taiwan to the Chinese people.

Mentioning his experience in the U.S. Navy, his visits to Taiwan, and the historical relationship between Taiwan and the U.S., Bannon says there is a “deep love for Taiwanese people” among Americans.

He expresses his belief that Taiwan has “tremendous support” among the American people and that the region has not been forgotten by the U.S. He predicts Taiwan will be a major hot-spot in global affairs over the next five to ten years.

In another portion of video, Bannon declares that there is no rule of law in China, and that the legal structure in China is subject to the whims of the current faction in power, led by Xi Jinping, and Wang Qishan.

In his comments, Bannon promotes a legal fund called the “Rule of Law fund” which is aimed to investigate miscarriages of justice in China, and to help support people targeted and persecuted by the CCP.

Guo Wengui is a very outspoken and wealthy political dissident living in New York, who is known for his provocative commentary on Chinese and Taiwanese politics.