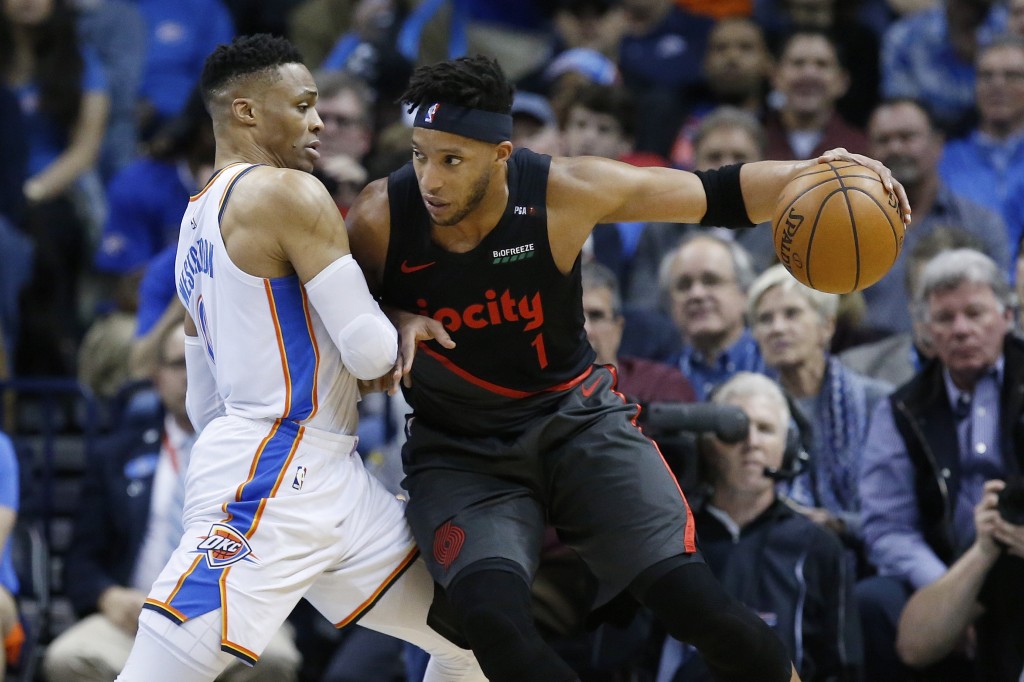 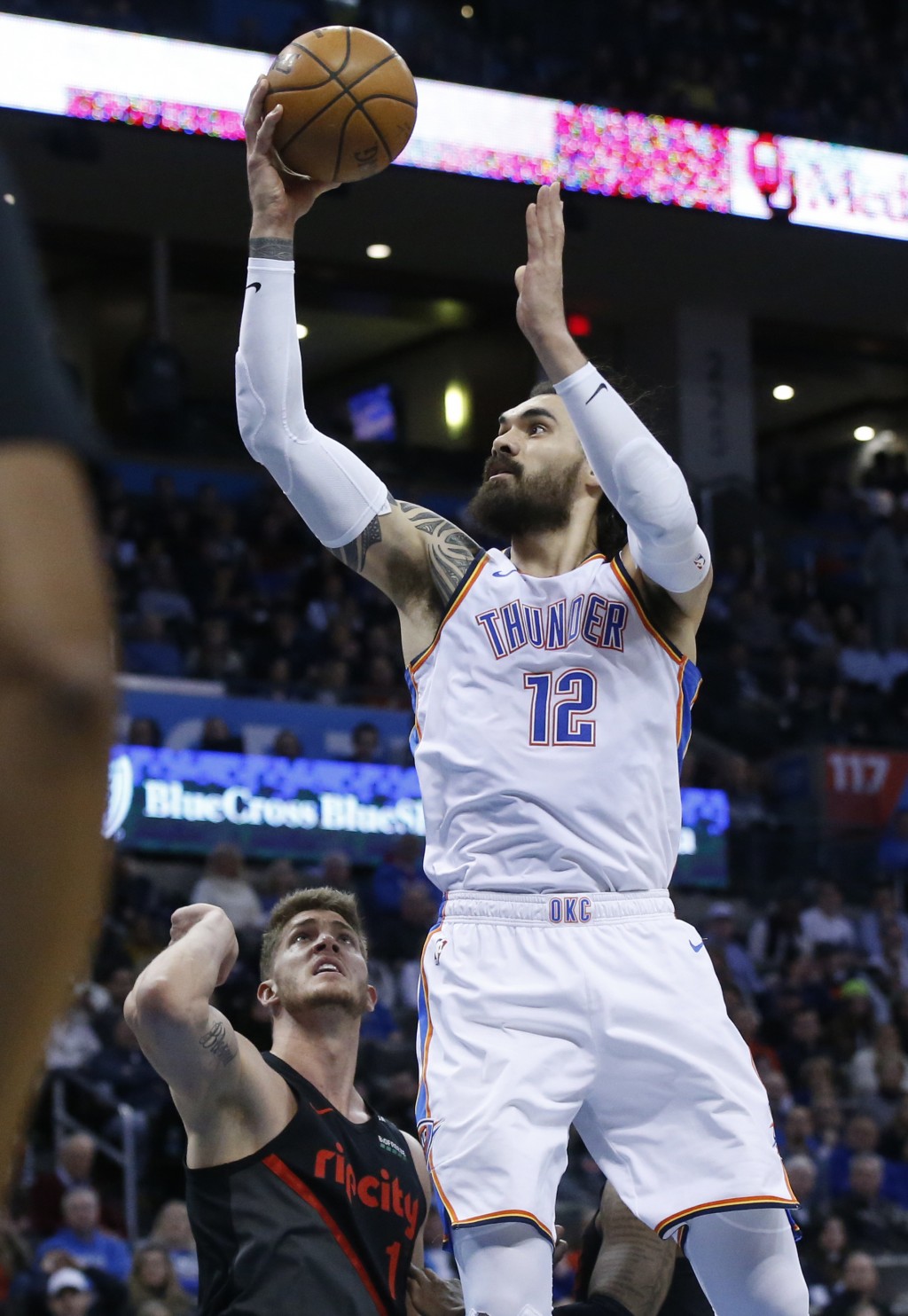 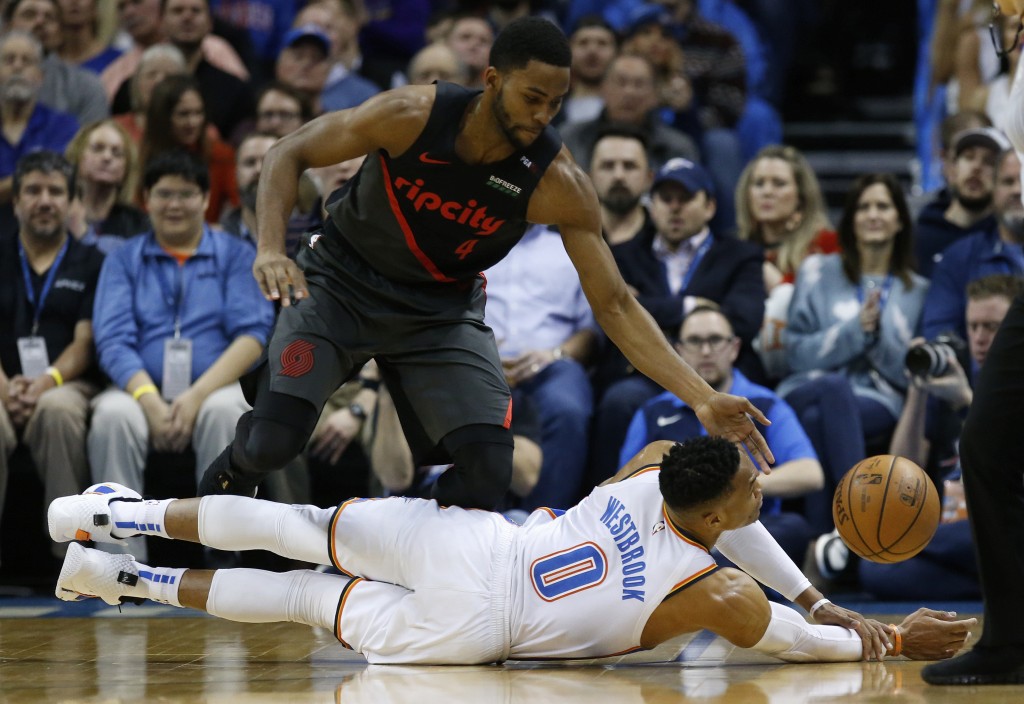 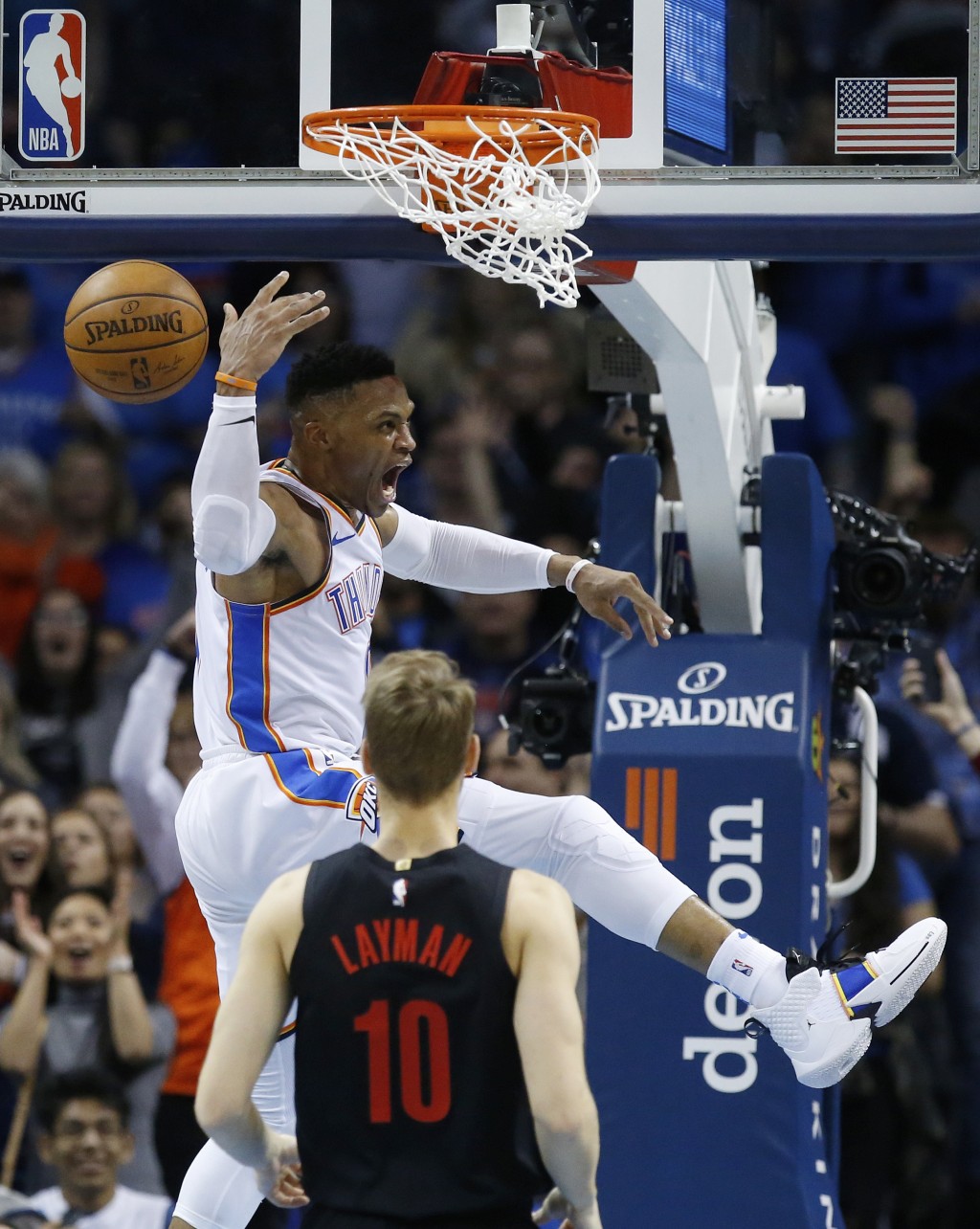 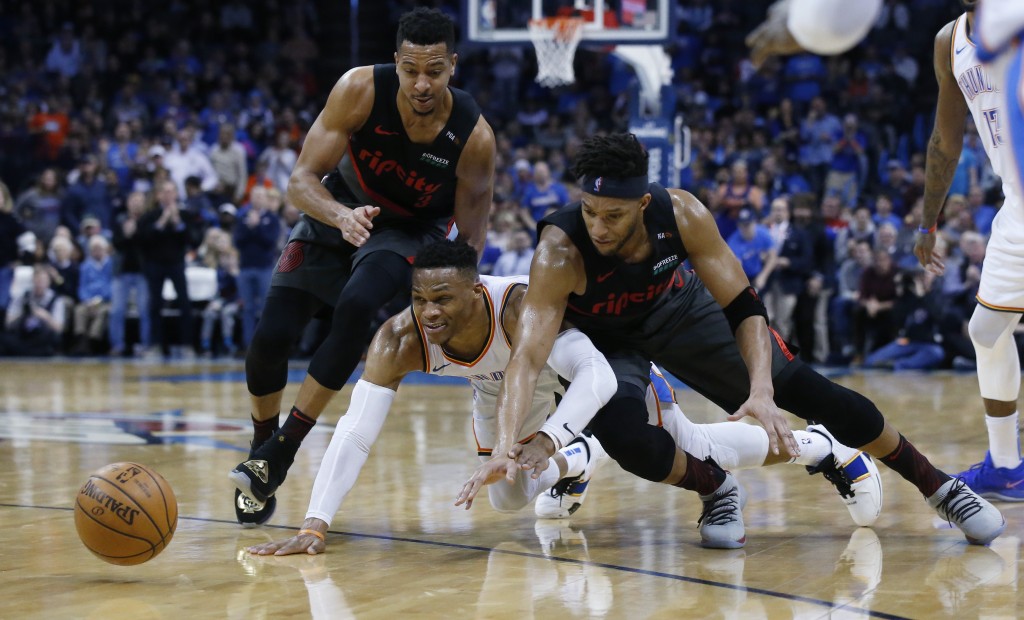 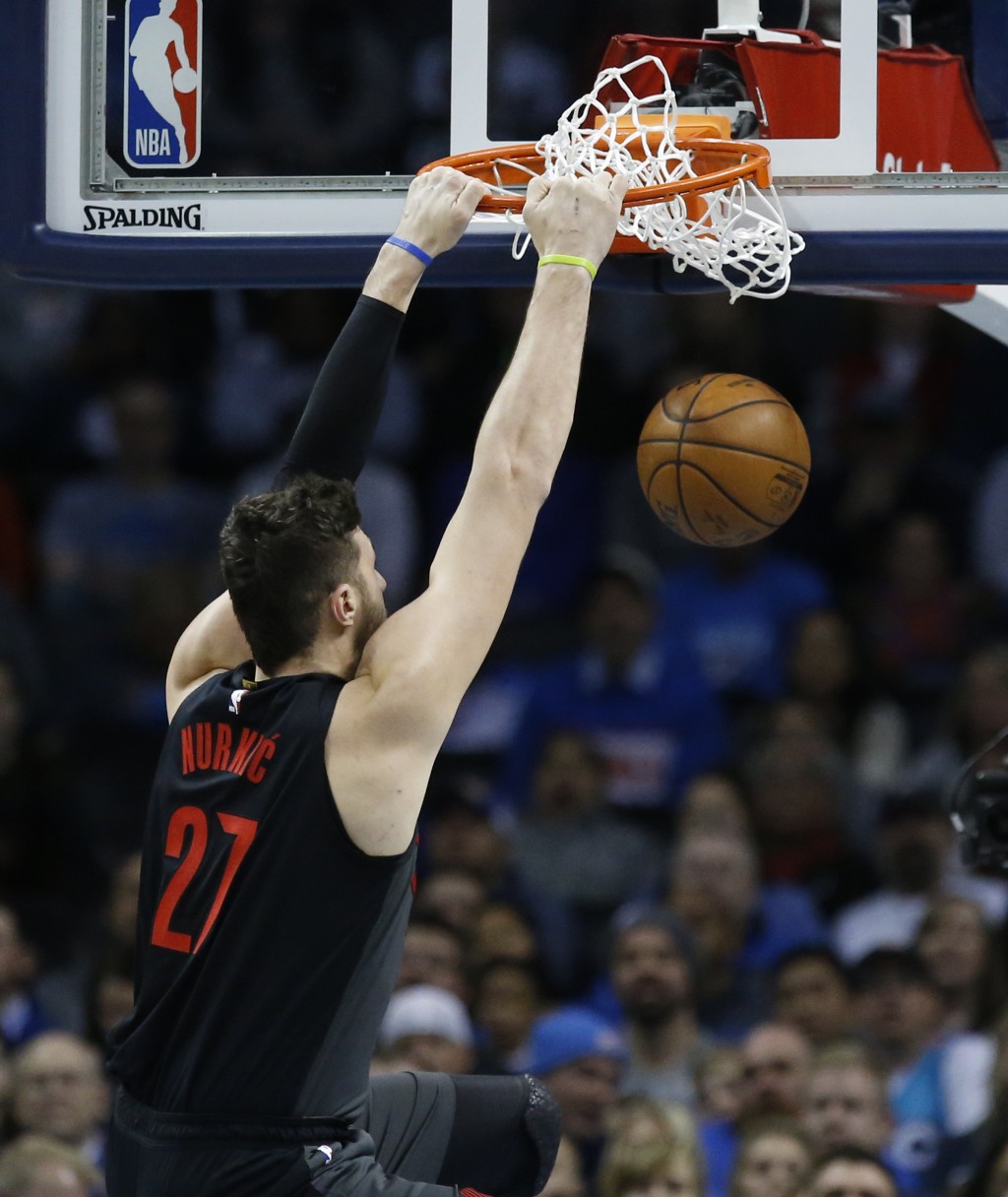 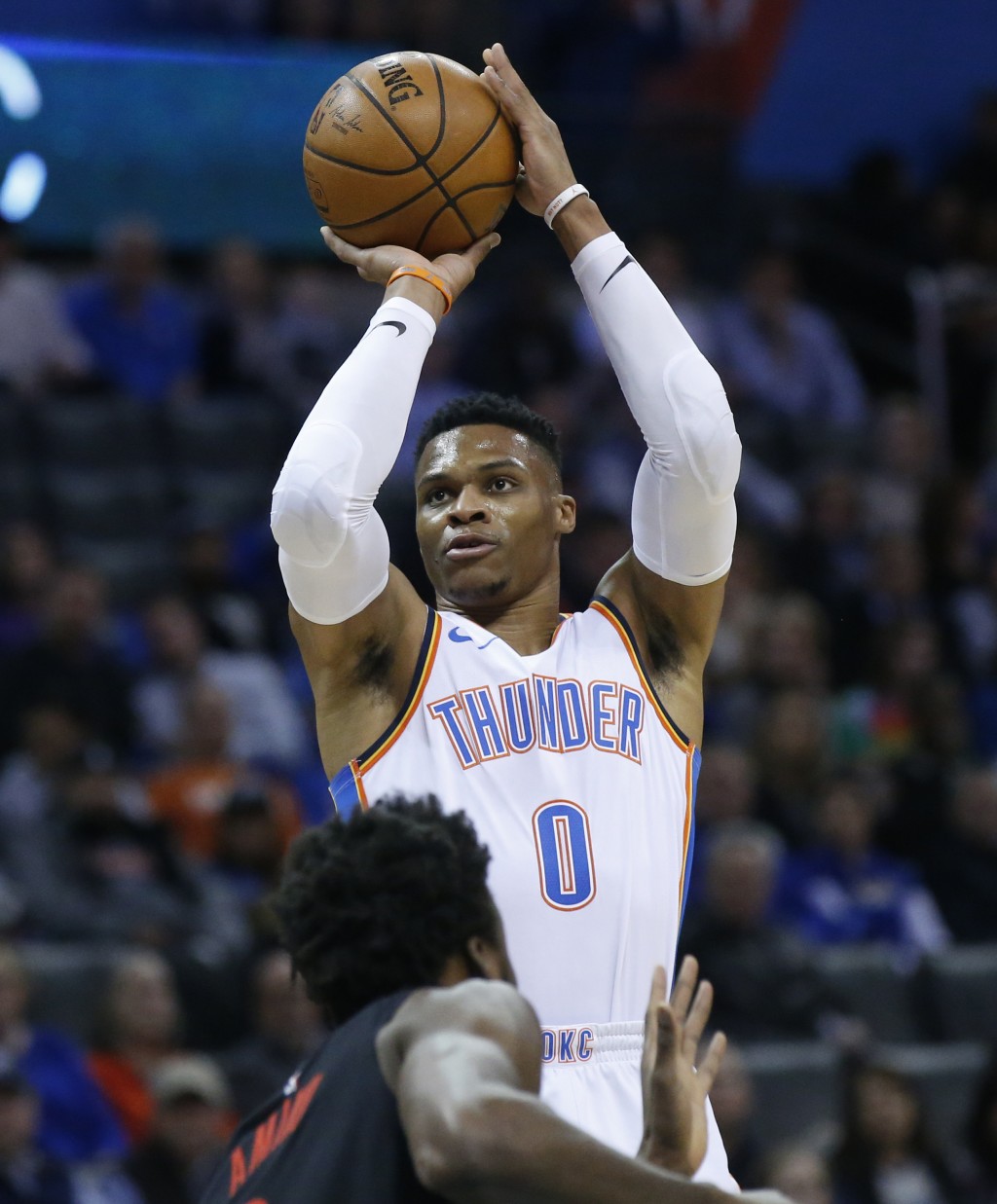 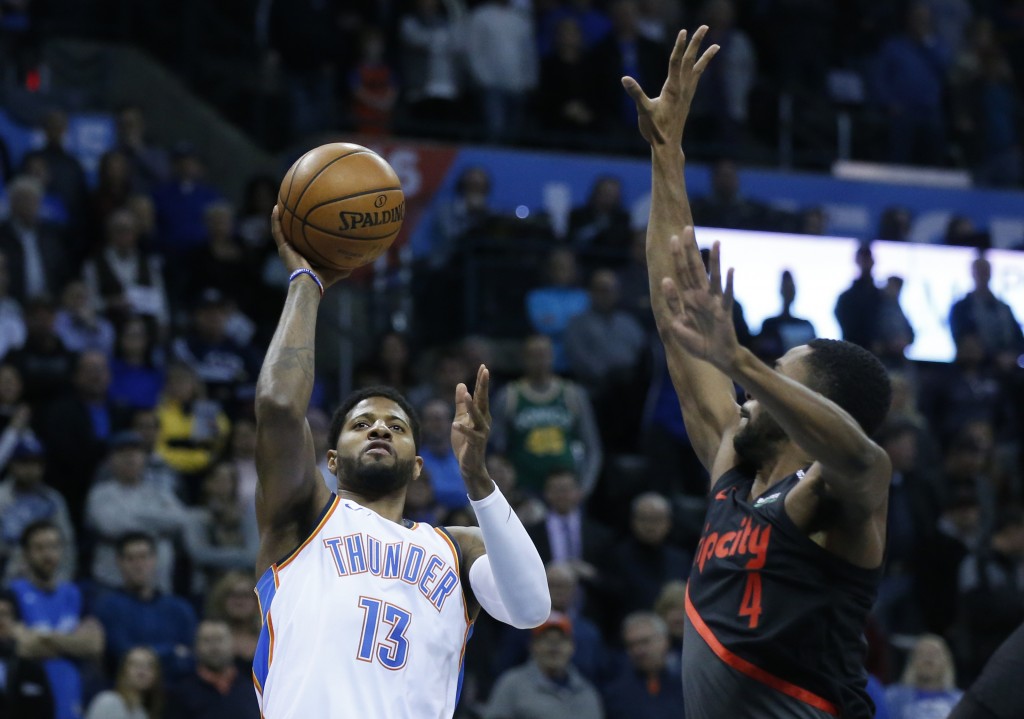 OKLAHOMA CITY (AP) — Paul George had 36 points and eight rebounds, Russell Westbrook had a triple-double of 29 points, 14 assists and 10 rebounds and the Oklahoma City Thunder beat the Portland Trail Blazers 123-114 on Tuesday night.

Steven Adams and Terrance Ferguson each added 14 points for Oklahoma City, which snapped a three-game losing streak to Portland at Chesapeake Energy Arena. After a stretch of losing five of six games, the Thunder have won three straight and moved back into third place in the fluid Western Conference standings.

Damian Lillard had 34 points and eight assists, and C.J. McCollum scored 31 for Portland, which had a three-game winning streak snapped. Jusuf Nurkick had 22 points and 15 rebounds.

McCollum's seventh 3-pointer, with 5:07 left, pulled Portland within 109-106, but George keyed a game-sealing run by the Thunder, hitting four free throws and then stealing a pass intended for Jusuf Nurkic and going for a layup to extend Oklahoma City's lead to 117-108 with 2:17 left. Westbrook capped the win with a pair of ferocious dunks in the final 1:24.

Oklahoma City led almost all the way — trailing for less than 30 seconds — but Portland never let the Thunder become comfortable. Through three quarters, only once did the Thunder push its lead to double digits, and that was 11 points late in the second quarter.

The Thunder hit 8 of 14 3-point attempts in the first two periods on the way to a 62-55 halftime lead. George was 3 of 5 from long range and had 20 points. McCollum hit five of his 3-pointers in the third quarter, twice pulling Portland within a point, but the Thunder held their lead and were ahead entering the fourth quarter.

Dennis Schroder keyed an 8-0 run by Oklahoma City early in the fourth quarter that put the Thunder ahead 101-89, but the Blazers scored seven straight to narrow the gap. Schroder scored 13 points for the Thunder.

Trail Blazers: Portland had the second-fewest turnovers in the NBA (12.2) over the previous 12 games, but had 19 against the Thunder. ... McCollum's seven 3-pointers increased his career total to 756, passing Nicolas Batum (751) for fourth on the franchise's all-time list. ... Nurkick has scored at least 17 in seven of his last eight games against Oklahoma City.

Thunder: G Alex Abrines was active for a second straight game, but did not play. He missed the previous 13 games due first to illness, then personal reasons. ... Westbrook's triple-double was his 14th this season and the 118th of his career. . The Thunder's bench produced only 19 points.