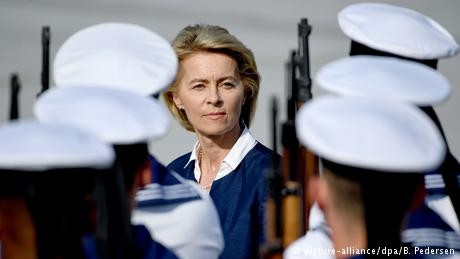 In an appeal to the American public, German Defense Minister Ursula von der Leyen penned a New York Times opinion piece on Friday making a case for the continuation of NATO.

The western security alliance, which turns 70 this year, has been repeatedly criticized by US President Donald Trump, who has reportedly expressed doubts about remaining in the alliance.

In her opinion piece entitled "The World Still Needs NATO," von der Leyen said that NATO is an "irreplaceable building block for an international order that favors freedom and peace."

The "international order" is under threat from military actions by Russia and China as well as "Islamic State" (IS) terrorism and nuclear weapon production, she writes.

"Maybe the most basic benefit of NATO is that it provides reliability in an unreliable world," the Christian Democrat politician wrote.

Describing what the alliance has meant to her personally, von der Leyen said that Germany was grateful for the security provided by NATO and that in her mind, the alliance was inextricably linked to her memories of the fall of the Berlin Wall.

"It represents a special, even emotional bond between the American and European continents," she wrote.

Defending the weakest, and strongest

Von der Leyen doesn't explicitly name the United States or Trump in the piece. She does, however, note that the one time that NATO's "an attack on one of us is an attack on us all" maxim was activated, it involved the alliance's other members coming the aid of the US.

"We will help our weakest ally just as we have helped our strongest by invoking Article 5 — for the first and only time in NATO's history — after Sept. 11 2001."

At a NATO summit last July, Trump voiced doubts over whether the US would honor Article 5, the alliance's collective defense principle, for Montenegro — NATO's newest member.

Von der Leyen's op-ed comes on the heels of a New York Times report that said Trump spoke with senior US officials about pulling the US out of NATO.

On Thursday, Trump told military members at the Pentagon that Washington was fully committed to the security alliance, but repeated his demand for other countries to increase their defense budgets.

He also reiterated his belief that NATO allies in Europe have been taking advantage of US security for decades.

"We cannot be the fools for others. We cannot be. We don't want to be called that. And I will tell you for many years behind your backs, that is what they were saying," said.

Germany is one of the members currently falling well short of the 2 percent of GDP target for military expenditure recently set by NATO. As defense minister, von der Leyen has been at the forefront of calls for a higher budget, but with only limited success.