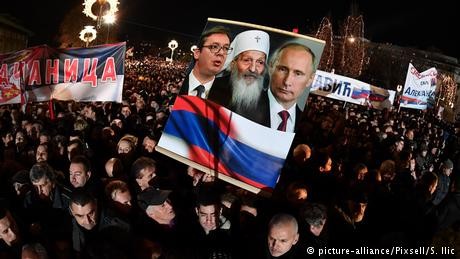 Russian President Vladimir Putin's state visit to Serbia was held with pomp and circumstance on Thursday, as the Russian leader sought to boost Moscow's influence in the Balkans, while his Serbian counterpart sought to deflect from anti-government protests.

After being escorted by fighter jets that were recently donated to Serbia by Russia, Putin was greeted in Belgrade with the tolling of church bells, gun salutes and supporters waving Serbian and Russian flags.

"I'm glad to have this chance to visit the friendly and brotherly Serbia and to talk about what has been done and what else can be done," Putin told his Serbian counterpart Aleksandar Vucic, according to Serbia's Beta news agency.

Putin called for stability in the region and pledged to invest $1.4 billion (€1.2 billion) in gas transport infrastructure in Serbia.

During the visit, Putin presented Vucic with Russia's Order of Alexander Nevsky, an award typically reserved for Russians but also foreign leaders who develop cooperation with Moscow. Vucic is only state leader outside of the former Soviet Union to receive the medal.

Putin won't be going home empty-handed either, as Vucic presented him with a Sarplaninac, or Yugoslav Shepherd Dog, puppy.

Putin's one-day visit culminated in a parade that wove through Belgrade before ending at the Saint Sava church, which is one of the largest houses of worship in Orthodox Christianity.

Tens of thousands of people took part in the parade, many waving Russian and Serbian flags. Critics have accused Vucic of staging the event in order to boost support after six weeks of protests.

Vucic's supporters were bused into the capital from around the country. Members of the opposition and media outlets that are critical of the government have reported that managers in state companies pressured employees to go to the Putin event.

Some workers at state-run companies as well as state administration employees were also allowed to take the day off to attend the rally, local officials confirmed to the Juzne Vesti news outlet.

Vucic has been facing growing protests, which have drawn crowds of around 20,000 people over the past six weeks.

Although Serbia is formally seeking European Union membership, the Balkan country has maintained close ties to Russia and has refused to join in sanctions against Moscow over Ukraine.

Affection for Russia in Serbia has been fueled by the Kremlin's refusal to recognize the independence of Kosovo, a former Serbian province that unilaterally declared independence in 2008.

Serbia also now buys all its natural gas from Russia and hopes to be connected to the TurkStream pipeline being built from Turkey to Russia.