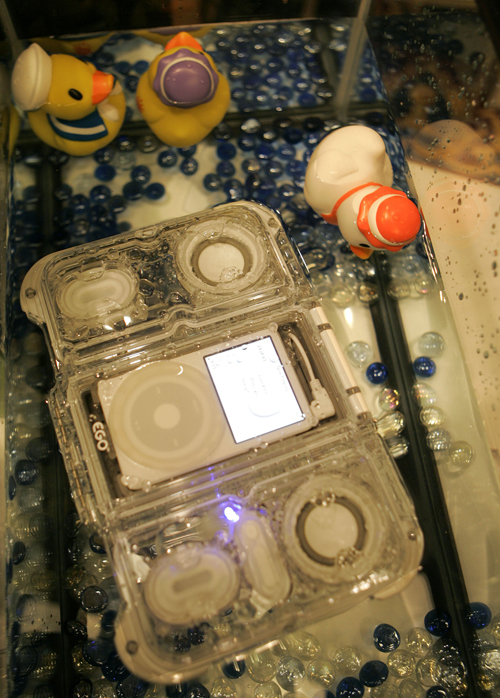 People are snapping up new technology, altering the fabric of society from the heart of the home to the driver's seat, the organizer of the world's largest consumer electronics show said here Saturday.
Sales of consumer electronics from manufacturers to retailers in the United States is expected to surpass US$155 billion in 2007, a six percent rise from 2006, according to the Consumer Electronics Association.
Last year the industry saw unprecedented growth of 13 percent, CEA lead analyst Sean Wargo said at a news conference held as final touches were put on the 40th annual International CES (Consumer Electronics Show), opening Monday in Las Vegas.
"The industry outlook is proof-positive that Americans can't do without their beloved consumer electronics," said CEA chief executive Gary Shapiro.
The category with the most "buzz" this past year was flat-screen televisions, sales of which sizzled as prices dropped, according to Wargo.
Portable navigation devices were a surprising "sleeper category" with sales coming in second only to the televisions, Wargo said.
"Consumers are adopting new technology faster than ever," he said. "The adoption curve greatly exceeds anything we've seen before."
The typical U.S. home has 26 electronic devices, according to CEA statistics.
"Look at where we were in 1975," Wargo said. "That is an impressive change in the make-up of our houses."
Key themes reflected among the 2,700 exhibitors at the four-day show include a continued trend toward captivating realism in devices ranging from televisions and computers to video game consoles and digital cameras.
Video games are also becoming gateways to other features such as movies and access to online communities. For digital cameras, the "mega-pixel revolution" is over and the focus is on ease of use, Wargo said.
Wargo said higher levels of realism would be delivered by new multi-format DVD technology and that Warner Brothers would announce a universal disk that could be read by Blu-Ray and competing devices.
Greater wireless, broadband and mobile telephone connectivity was another strong theme at the show, along with the boom in home computer networks, Internet telephony referred to as VoIP and Bluetooth wireless devices.
"We are not just a hardware show any more, we are much more about the services and the software," Wargo said. "VoIP, blogs and vlogs are much more the fabric of our industry."
Other show trends were converging technologies and making them portable, and the embrace of "disruptive" channels of distribution such as Web sites YouTube, Bebo and MySpace to get video, films or music.
"These are new conduits that go against the mainstream model of cable, television ... we see a shift from old models to new," Wargo said.
"For now, physical still dominates in that we see consumers buying CDs, but they immediately rip it to digital so they can take it with them."
A CEA study revealed consumers longed for a device that would let them watch computer-downloaded video on their televisions.
Apple chief executive Steve Jobs has promised to unveil just such a device, a box dubbed iTV, at the MacWorld Exposition in San Francisco on Tuesday.
"Early adopters are looking for new delivery mechanisms - these disruptive forms of delivery that change the status quo," Wargo said, referring to people prone to buying the latest gadgets as soon as they are available.
The industry was seeing MP3, voice, games, video and global positioning satellite (GPS) technology meshed together in devices, and the same with television, digital recording, gaming and computer software, Wargo said.
"Pick your flavor, it's there," Wargo said of feature combinations.
Dashboards in autos have become "very desired real estate" for gadgets offering combined features, especially video viewing and GPS navigation.
"Building more features into devices in a smart way may mean a collapsing universe of products," Wargo said.
"Consumers are taking not just their content with them, but devices to enable productivity, communication, entertainment ... indicating a convergence to all of these things in one place."
CEA leaders agreed that exactly what the next life-altering invention would be was not clear at the vast International CES, which spans the equivalent of 35 U.S. football fields at the Las Vegas Convention Center. It continues through January 11.
"In previous years it was easy," Wargo said. "This year, we are challenging ourselves to find the next innovation that will take us to that next level."