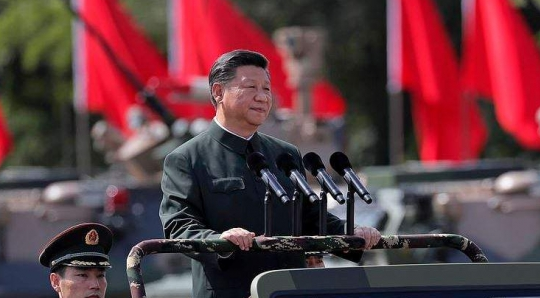 Orita says that China’s national strategy is one of continued expansion, with an aim of establishing absolute regional hegemony, beginning with a plan to invade and annex Taiwan between 2020 and 2025, and eventually Okinawa as well.

But, according to Orita, China’s plans don’t stop there. Between 2025 and 2040, he says Beijing plans to consolidate its control over the South China Sea.

If Beijing can expel the U.S. from the region, then shipping lanes through all of East Asia will be under the control of Beijing allowing China to potentially cut off vital food and energy supply lines to Japan, says Orita.

The former JASDF officer says the first step in expelling the U.S. from the region will be to invade the Scarborough Shoal and establish a naval outpost there. Ships coming from the Western Pacific will be forced to contend with a Chinese naval fleet that will meet them upon entry into the South China Sea.

If Taiwan has been conquered, and the Philippines are under pressure and threat to accept Chinese hegemony, then once a base on the Scarborough Shoal has been established, foreign navies will only have access to the South China Sea via southern routes of entry.

Orita declares dramatically that Chinese seizure of the Scarborough shoal will be “game over” for Japan, and U.S. power in the region.

This is because once absolute control over Taiwan and the sea lanes of the Indo-Pacific have been established, Beijing will be able to project power, including the threat of nuclear attack across the Pacific Ocean, imperiling U.S. possessions, the state of Hawaii, and even the west coast of the continental U.S.

If China is capable of securing complete control of the South China Sea before 2040, Orita argues that China’s next target for territorial expansion will be Okinawa and nearby island chains.

He says that China is planning to retake the Diaoyu Islands (Senkaku Islands in Japanese), and that China may stage an attack on Okinawa by 2045. A portion of Orita’s comments, as recorded by the Liberty Web news site.

“The world has entered an age where we must choose between U.S.-centric values of liberty (Pax Americana) or Chinese-centric oppression (Pax Sinica). The Free and Open Indo-Pacific is a counterstrategy against China’s ‘One Belt, One Road’ initiative, and aims to unite countries that share the values of freedom, democracy and human rights.”

While some, especially the Chinese government, may call Orita’s claims alarmist, his analyses on the region’s geography and China’s ambitions have no doubt been considered by the U.S.-Japan military alliance.

Orita recognizes that U.S. Freedom of Navigation Operations, and the Trump administration’s “Indo-Pacific Strategy” are crucial counterweights to China’s “One Belt, One Road” initiative. Likewise, a democratic Taiwan remains a crucial component to the region’s security and continued prosperity.

The English article at the Liberty Web is a translated and abridged version of an interview Orita conducted in late December at a conference on the future of the South China Sea in the era of Donald Trump and Xi Jinping.

Scholars at the conference agreed that conflict between the U.S. and China in the region will dominate global political news in 2019.